It Was a Waste, But This is Just Nuts 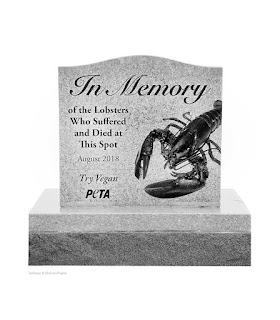 The Maine Department of Transportation has denied a request from People for the Ethical Treatment of Animals to build a 5-foot tombstone memorial where lobsters may have died after a crash on Route 1 in Brunswick last week.

Brunswick Police say a Cozy Harbor Seafood truck, carrying nearly 70 crates of lobster, rolled over and crushed several of them. 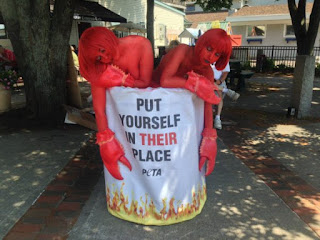 It is because of the lobsters that were pinned under the truck that PETA wrote a letter to the Maine DOT on Wednesday asking for permission to put up a memorial.

At least PETA managed to also work some of their "naked ladies for veganism" into the fray (in a previous protest against Maine Lobsters). 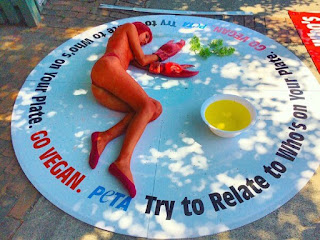 “Countless sensitive crustaceans experienced an agonizing death when this truck rolled over and their bodies came crashing down onto the highway," PETA Executive Vice President Tracy Reiman said. "PETA hopes to pay tribute to these individuals who didn't want to die with a memorial urging people to help prevent future suffering by keeping lobsters and all other animals off their plates."

The Maine DOT says they denied the request Thursday because Route 1 in Brunswick is a “controlled-access highway,” which means they prohibit signs, and in this case a tombstone, because of safety concerns.

Wombat-socho has Rule 5 Tuesday: Happy Birthday, Mitzi! up and awaiting your approval.
Posted by Fritz at 6:51 PM