Our long national nightmare will soon be over . . .

There was never really any chance that Trump would be removed from office, which would take 67 senators voting to convict. Nancy Pelosi knew that when she gave Adam Schiff the green light to commence this partisan witch-hunt in September. From the beginning, Schiff’s investigation was compromised by the fact alleged “whistleblower,” Eric Ciaramella, had no direct knowledge of the July 25 phone call at the center of the Ukraine (non-)scandal. Ciaramella is a Deep State protégé of John Brennan, and a known Biden supporter, while Ciaramella’s former NSC colleague Sean Misko, “joined Schiff’s committee staff in August, the same month the whistleblower submitted his complaint.” Whatever your opinion of Trump’s Ukraine policy, the Schiff investigation looked like a subversive plot against the president organized by a cabal of Democrat operatives.
Republican senators recognized this; the real question was whether such deliberate sabotage of the administration was acceptable. And thanks to “Cocaine Mitch,” the answer is, hell no.

Andy McCarthy from Fox In Trump impeachment trial, Senate right to block new witness testimony while Politico speculates as to Why 4 key Republicans split — and the witness vote tanked. Althouse,  If you know in advance that whatever you give will not be enough but will only set up the next demand...

No matter what you give to the Democrats, in the end, they will NEVER be satisfied. In the House, they gave us NOTHING!
— Donald J. Trump (@realDonaldTrump) February 1, 2020

Power Line's John Hinderacker, It's All Over But the Whining. "Our long national nightmare is about to end. Unless you’re a Democrat." It's way more than whining. Twitchy, ‘You mad, bro?’ Ex-Mythbuster Adam Savage has a Senate Republican-induced impeachment trial meltdown and CNN reports that President Trump not expected to apologize after his acquittal in Senate. Insty, Dem leaders signal they won’t accept Trump acquittal as legitimate. "BFD, they’ve never even accepted his election as legitimate. They only consider any process legitimate when they win. Because they’re horrible, garbage people and bad Americans." Nick Arama at Red State, Tim Scott Explains There Were Witnesses During Impeachment, Gets Attacked With Slur, Has Best Response

Daniel McCarthy, SpUSA, Impeachment has proved the Democrats are no longer democrats "Their arguments about why the Senate needed to call witnesses were contradictory" At best, at worst they were incoherent.

Via the Wombat's In The Mailbox: 01.31.20, Da Tech Guy has Five Impeachment Realities:


1. This is all Appeasement for the Liberal Activist Class, 2. Polls Don’t Matter if most People Aren’t Watching, 3. The Democrat/Media story is already written, 4. Liberal Outrage is the GOP’s Friend and 5. Desperate People Make Mistakes


At best for the Dems, we are right back to where we started. At worst for them, while national polling is more divided, there is a surplus of polling across key Rust Belt swing states to suggest that impeachment will likely redound to Republicans’ electoral interests in November.

But think of all the extra votes they'll get in California and New York! Herr Professor at LI, In Praise of Mitch McConnell. Cocaine Mitch! But do we also have Fauxcahontas to thank? Cruz Says Flailing Fauxcahontas's Question to Roberts Killed Any Hope of Impeachment Trial Witnesses. From Fox, Ted Cruz appears to mock Pelosi's SOTU handclap at GOP's successful impeachment vote: 'Who did it better?'

At WaPoo, James Comey shrugs. Trump won’t be removed. But we’ll be fine. Too bad he's not writing from jail, predicting that Republicans will be thrown out of power as a result.  Althouse, "It has always been ugly and a little nuts in our huge, complicated country. We last had a relatively stable consensus during George Washington’s first term..."


"I agree with some of that, but certainly not the part about the Republicans inevitably losing power. That's a talking point today, I think, that the Democrats are losing in the impeachment trial, but they'll win in the coming elections."

and then"Up next: More on the death of the Republican Party."


The hysteria is running high on MSNBC. I drop in to see them deep into the "death" metaphor, and it was really weird to hear them using to keep the audience as they broke for commercial. What a nutty promise: More death!

The Atlantic, Lamar Alexander Just Gave Democrats What They Wanted "If removing Trump from office was never a realistic outcome of impeachment, then securing Republican condemnation of the president’s behavior was the most the House could have hoped to achieve." It's always been about the smear, and keeping the base well fed with outrage. 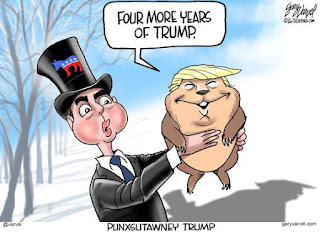 Stu Cvrk at Red State, Impeachment Trial: An Open Letter to Pierre Delecto, Alias Willard “Mitt” Romney, and not a very nice one. Politico, Romney not welcome at CPAC after impeachment witness vote.

Ed Timberlake at AmThink, Chief Justice John Roberts strikes out. I disagree. I think he did a good job of following Rehnquist's dictum, do "nothing in particular, and did it very well.'”" Sure, there were some awkward moments with Liz Warren and Rand Paul, but those weren't of his origin. EBL, Eric Ciaramella and John Roberts: CALL ME BY YOUR NAME.
There's nobody like sundance of stretching his speculations. The Biden Purpose is Finished – Watch How Fast He Plummets…


I contend that Impeachment 2.0 was contingent upon Joe Biden running for office. Why? Because without Biden as a “candidate” the entire premise of the impeachment narrative: “president Donald Trump investigating his political opponent”, doesn’t exist.

Impeachment 2.0 was centered around a predictable Trump administration Ukraine investigation; much of which was likely being stirred by the coup plotters themselves; and was dependent on a political opponent. Hence, Joe Biden running for office was needed.

He's been right a lot in the past, but he's also been out in left field sometimes. We'll see.

Linked at Pirate's Cove in the weekly Sorta Blogless Sunday Pinup and links.
Posted by Fritz at 8:41 AM