Continuing with the "bombshell" allegations from Overstock founder and ex-CEO Patrick Byrne, the Wombat's In The Mailbox: 08.23.19 the Shark Tank highlights the fact that  Rubio Targeted By FBI In “Political Espionage” Probe, along with Trump, Clinton and Cruz. It may well be that Comey's FBI was getting back into the political blackmail business that J Edgar founded back in the day. It seems that kind of power keeps corrupting.

Overstock CEO Patrick Byrne says the FBI in 2015/2016 reached out to him and got him to help with law enforcement activities that turned out to be political espionage against Donald Trump, Hillary Clinton, Marco Rubio, and Ted Cruz


Also, from the Victory Girls, Is Patrick Byrne Crazy Like A Fox Or Just Crazy? Just because someone is paranoid doesn't mean they aren't out to get him. Capt. Ed at Hot Air, Former Overstock CEO: James Comey Wanted Me To Sleep With Maria Butina. Wasn't that convenient? And as sundance at CTH notes, Andrew McCabe and James Comey Deny “Nuanced Specifics” of Claims by Patrick Byrne – But Do Not Deny Substance of Allegations……


According to the responses presented by CNN, James Comey and Andrew McCabe deny ever participating in instructions to Mr. Byrne to engage in a “romantic” relationship with Maria Butina:
. . .
It is worth noting that both Comey and McCabe are only refuting their knowledge of any instruction to cultivate a “romantic relationship.” Neither McCabe nor Comey are actually denying the FBI counterintelligence operation using Byrne to manipulate Maria Butina.

As we noted in the review of Byrne’s allegations: the described FBI contact structure highlighted an arms-length operation; perhaps intentionally constructed to create plausible deniability for those above the directly instructing agents.

It would appear the carefully framed denials by Andrew McCabe and James Comey are structured to be as disingenuous as possible; thereby allowing room for confirmations to come out later, and still retaining their plausible deniability on specifics.


. . . Don’t forget for a moment that CNN has featured James Clapper as an analyst for the past two-plus years, despite the fact that he got caught misleading Congress on domestic surveillance. Senate Democrat Ron Wyden at one point wanted Clapper fired over it, if not prosecuted for it. Justin Amash, lately a media darling for renouncing his Republican affiliation, accused Clapper of perjury. All of that was well known before CNN picked him up as a national-security analyst. Did Stelter object then?

If not, then how about now? CNN just hired Andrew McCabe, the FBI’s former #2 who got fired after the Inspector General referred him for criminal prosecutionfor lying to investigators about his leaks to the media . . .

Ace is so wroth he can barely spell, CNN Hires Disgraced Partisan Liar and Russia Hoax Perpetrator Andrew McCabe as a Contribuotr

Andrew McCabe, one of the central figures of the “Russia collusion” hoax, who was fired from the FBI for lying about his leaks to the media, has been hired by CNN, one of the media outlets that did the most to perpetuate the damaging hoax. pic.twitter.com/lvfPRCk4tb
— Mollie (@MZHemingway) August 23, 2019


"pretty sure he has always been a contributor, now it is just public knowledge." And sundance? Well, sundance says CNN Hires FBI Architect of ‘Soft Coup’, Identified Leaker and IG Defined Liar, as Contributor…

McCabe was fired from the FBI for lying to investigators. [IG report on McCabe]
. . .
McCabe was also identified as the primary architect of the corrupt DOJ/FBI effort to impeach/remove President Trump. No doubt CNN and McCabe will use this platform as a way to defend the corrupt Obama DOJ and FBI officials from any damaging releases within the pending Inspector General report on FISA abuse. 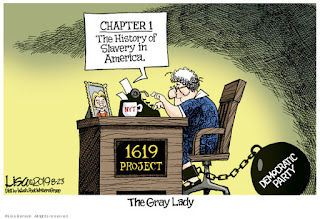 And something a little different. As you may have picked up over time, the web news site Epoch Times has become an important source of news and analysis of the Russiagate/Spygate scandal, to the point that MSNBC has sought to discredit it as a foreign inspired and funded fake news site, citing evidence of Falun Gong funding. Now, as reported by Insty, FACEBOOK SUCKS UP TO CHINA: Facebook Bans Ads From The Epoch Times. Related: Why The Epoch Times Has Been Getting Spygate Right. Remember when it was a scandal that the Washington Times was owned by the Moonies? Nobody remembers or cares about that now, because they still publish facts as well as opinions. Is it any worse than being owned by 'Pinch' Sulzberger, or 'Email my dick pic' Bezos?
Posted by Fritz at 7:52 AM