From Today's Walk to the Beach 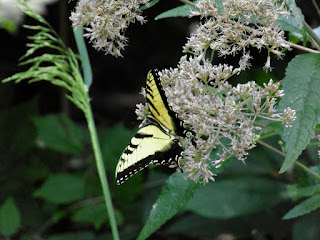 Some butterflies on the way to the beach. An Eastern Tiger Swallowtail male (compare to the female from yesterday). 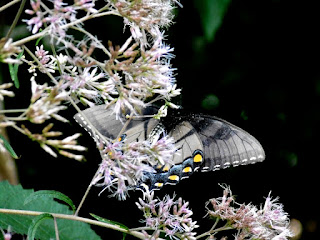 A black morph female on the next stalk over. Too bad Skye wouldn't let me wait for a shot at the upper side. 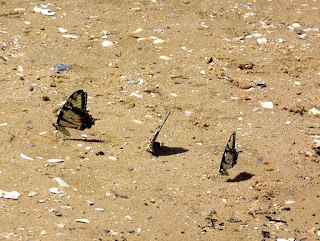 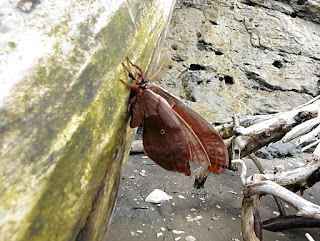 Something different on a lot under the cliff. 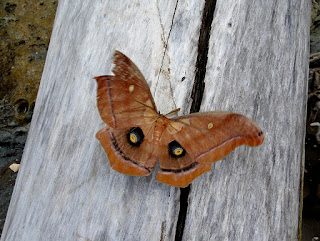 Caterpillar Hosts: A wide variety of trees and shrubs including oak (Quercus), willow (Salix), maple (Acer), and birch (Betula).
Adult Food: Adults do not feed.
Habitat: Deciduous hardwood forests, urban areas, orchards, and wetlands.
Range: Locally common in its broad range; in Canada in province except Newfoundland and Prince Edward Island; in the United States, every state except Arizona and Nevada; and Mexico. 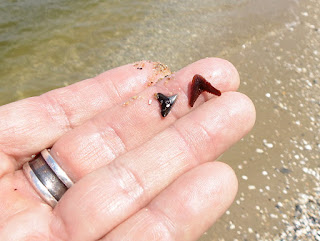 We got a lot of shark's teeth today, but mostly small. The chevron on the right is a Bonnet Ray mouth plate, in better shape than most, with an unusual color and texture. Instead of black and opaque, it was brown and somewhat translucent.
Posted by Fritz at 7:37 PM