Only one story today, but it's a doozie, From Da Caller, Peter Strzok Sues DOJ And FBI Over Firing, Claims His Anti-Trump Texts Were Protected Free Speech

Peter Strzok, the former FBI agent fired over anti-Trump text messages, sued the Justice Department and the FBI Tuesday, claiming that he was fired due to political pressure from President Donald Trump.

In the lawsuit, filed against Attorney General William Barr and FBI Director Christopher Wray, Strzok also alleged that his First Amendment rights were violated, as was his privacy due to leaks of his text messages to the media.

“The FBI fired Special Agent Strzok because of his protected political speech in violation of his rights under the First Amendment to the Constitution of the United States,” reads the lawsuit, which seeks back pay and Strzok’s reinstatement to the FBI.

Strzok was a lead investigator on both the Hillary Clinton email investigation and the Trump-Russia probe. As deputy chief of counterintelligence, Strzok opened the FBI’s investigation of the Trump campaign on July 31, 2016.

He joined the special counsel’s team shortly after it was formed on May 17, 2017, but was removed from the investigation in late July 2017 after the Justice Department’s inspector general discovered that Strzok and his mistress, an FBI lawyer named Lisa Page, had exchanged numerous text messages criticizing Trump.

In some exchanges, Strzok and Page spoke of preventing Trump from winning the 2016 election.

Strzok insists in the lawsuit that his anti-Trump text messages are protected by the First Amendment, and that he was the victim of “unrelenting pressure from President Trump and his political allies in Congress and the media.”

“The campaign to fire Strzok included constant tweets and other disparaging statements by the President,” the lawsuit says. 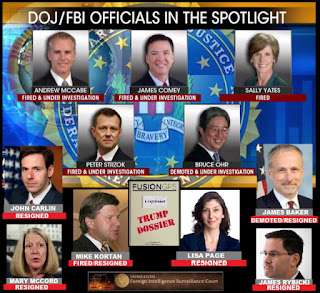 
Upon initial review, this lawsuit looks like a stunt; motive undetermined, but perhaps related to the pending release of the IG report on FISA abuse where Strzok was a key participant.

A federal civil lawsuit using the DC circuit and the U.S. Constitution as a primary protective assertion does not follow the path of a serious claim for wrongful firing or termination of employment.

Traditionally, and with a genuine claim, wrongful termination actions would go through a formal complaint and review process within the U.S. Department of Labor. Hiring a lawyer and filing a federal civil lawsuit claiming disingenuous constitutional rights violations reeks of an ulterior motive for publicity; ie. purposeful political value in alignment with Strzock’s allies in Lawfare. This is a political stunt… 100%


Because we live in an age without shame, disgraced former FBI agent Peter Strzok has filed suit to get his job back -- including back pay for the time he wasn't hard at work protecting America from a free and fair election.


Strzok was initially removed from Mueller’s investigation because of his partisan text messages in the summer of 2017, though his removal didn’t become news until December of that year. The Office of Professional Responsibility investigated and found Strzok had crossed a line in three specific ways:


The first, “unprofessional conduct off duty,” directly related to his use of an FBI-issued cell phone to send the private texts. The second, “investigative deficiency” — later reduced to “dereliction of supervisory duty” — related to Strzok’s perceived delay in searching a laptop that belonged to Anthony Weiner, the husband of a top Hillary Clinton aide, as part of the probe of Clinton’s emails in the fall of 2016.
Finally, Will told Strzok that he had committed a “security violation” for forwarding certain sensitive law-enforcement documents to his personal Gmail account.

None of those have to do with the content of Strzok’s emails and the OPR did not recommend Strzok’s firing. However, point #2 was a significant part of the IG’s report on the Clinton investigation. The IG found that the FBI had all the information it needed to investigate hundreds of thousands of emails found on a laptop belonging to Anthony Weiner by late September. However, for several weeks, nothing happened. From the IG report:


Additional discussions took place on October 3 and 4, 2016. However, after October 4, we found no evidence that anyone associated with the Midyear investigation, including the entire leadership team at FBI Headquarters, took any action on the Weiner laptop issue until the week of October 24, and then did so only after the Weiner case agent expressed concerns to SDNY, prompting SDNY to contact the Office of the Deputy Attorney General (ODAG) on October 21 to raise concerns about the lack of action.

It occurred to the IG that Strzok’s partisan texts might provide an explanation for slow-walking the investigation of the laptop in the weeks before the election. The IG looked for evidence that was the case and couldn’t find anything definitive. However, he concluded that none of the explanations offered to explain the delay made any sense:


We searched for evidence that the Weiner laptop was deliberately placed on the back-burner by others in the FBI to protect Clinton, but found no evidence in emails, text messages, instant messages, or documents that suggested an improper purpose. We also took note of the fact that numerous other FBI executives—including the approximately 39 who participated in the September 28 SVTC—were briefed on the potential existence of Midyear-related emails on the Weiner laptop. We also noted that the Russia investigation was under the supervision of Priestap—for whom we found no evidence of bias and who himself was aware of the Weiner laptop issue by September 29. However, we also did not identify a consistent or persuasive explanation for the FBI’s failure to act for almost a month after learning of potential Midyear-related emails on the Weiner laptop.

So there’s no evidence partisanship was the cause but there’s also not other persuasive explanation for the delay. Ultimately, it was this delay that led to Comey’s surprise announcement that the FBI was still investigating Clinton days before the election. If the laptop investigation hadn’t stalled, Comey’s announcement might have come weeks earlier.

In any case, Strzok’s partisan texts certainly put the investigations he was part of in a bad light. Whether or not the FBI had cause to fire him based on the OPR’s conclusions is something that will now be worked out in court.

I don't really know how the suit will go over. DC is a company town, and the company is the government and the Democrats that run the deep state. Assuming the suit gets that far, I can easily imagine it being very difficult to assemble a jury not biased in favor of a pro-Democrat bureaucrat.

But Strzok wasn't the only fly in the ointment at the FBI, as Tyler O'Neil at PJ Media reminds us that  14 FBI Officials Leaked to the Media, Only Four Were Fired, Judicial Watch Reveals


On Tuesday, Judicial Watch announced it had received records showing that the FBI referred 14 employees to the Office of Professional Responsibility (OPR) for leaking sensitive or classified information. Of those 14 employees, only four were fired.

"No wonder the FBI was leaking so profusely. Collectively, these documents show a show lenient treatment for evident criminal activity. Only four of the 14 employees found to have made an unauthorized disclosure were dismissed from the FBI," Judicial Watch President Tom Fitton said in a statement. "And even though Andrew McCabe was fired and referred for a criminal investigation for his leak, no prosecution has taken place."

During the early years after President Donald Trump was inaugurated, The New York Times and The Washington Post would have stories seemingly every other day citing anonymous sources from within the FBI. Last September, a high-ranking official published an op-ed in the Times detailing a deep state or "resistance" effort to sabotage Trump from within.

The fact that leakers were treated leniently helps to explain why officials continued to leak sensitive information to the press, often involving the Trump-Russia collusion angle. Leaking this information is a crime, but it appears the FBI did not hold its staff accountable as it could or should have.

The documents show that penalties for unauthorized disclosure of sensitive and/or classified information ranged from no action to dismissal. Some employees were suspended for one, five, 14 or 45 days without pay. Here are a few examples:

An unidentified employee, who was cited for misuse of an FBI database and unauthorized disclosure of classified/law-enforcement sensitive/grand jury information, was given a 12-day suspension. The case was closed in January 2016.


An unidentified employee was accused of “Investigative deficiency – improper handling of documents or property in the care, custody or control of the government; unauthorized disclosure – classified/law enforcement sensitive/grand jury information” and “failure to report – administrative.” It was proposed that they be given a 30-calendar day suspension without pay; the final decision from OPR was that they were given a 10-calendar day suspension without pay. This case was closed in February 2018.

The Deep State takes care of its own.
Posted by Fritz at 7:59 AM