Just a Smidge of Russiagate

. . . survived the weekend. From sundance at CTH, Rod Rosenstein Contacted Mueller About Special Counsel 14 Hours After Comey Fired… Act in haste, repent at leisure. I'm pretty sure the decision kept Rod from being considered for AG. As it should. But I'll bet he makes a ton more money in the private sector. 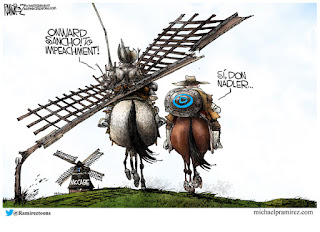 
After the first segment on the El Paso and Dayton shootings, Ms. Bartiromo segued into a discussion of George Papadopoulos and the secret informant transcripts; from recordings that were part of the FBI sting operation using U.S. intelligence asset Stefan Halper; and are now being held in evidence by U.S. Attorney John Durham and Inspector General Michael Horowitz. [Background] Keep in mind Gowdy has seen these transcripts.

According to Bartiromo those transcripts include FBI wire-taps of Halper attempting to get Papadopulos to accept assistance from Russia (delivering Clinton emails), and George Papadopoulos absolutely refusing to accept any engagement therein. Confirming that outline, Gowdy notes there are more recordings (and transcripts) of a similar nature, where the FBI was attempting to bait other Trump campaign officials.

From Tammy Bruce's Live Wire, a reminder that Mueller may not have been on top of his game for a long time: Flashback: FBI Chief Mueller Didn’t Know Boston Bombers Attended Radical Mosque


As you watch the video, keep in mind that Robert Mueller was the head of the FBI in 2013.

Let that sink in.