Rains No Help to Chesapeake Lawn 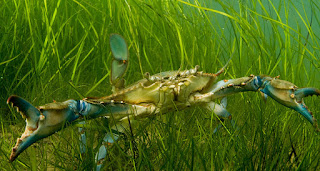 
Portions of the Chesapeake Bay’s underwater grass meadows appear to be headed for steep declines this year, a delayed response to the torrential rains that poured vast amounts of water-fouling sediments and nutrients into the estuary during 2018.

At the same time, preliminary reviews of the aerial images show that portions of the Upper Bay survived last year’s deluge of muddy water surprisingly well, with grass beds even expanding in some areas. 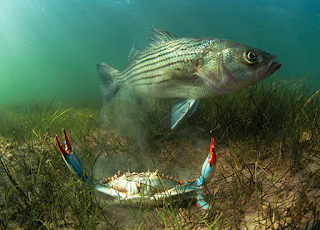 “It’s going to be a mixed story, as it always is,” said Bob Orth, the Virginia Institute of Marine Science researcher who has been overseeing the aerial survey since its inception in 1984.

The full analysis of this year’s survey, which is still under way, won’t be available until early next year. But the broad picture is starting to emerge as Orth and others pore over the hundreds of aerial images gathered thus far.

Underwater grasses are one of the Bay’s most critical habitats, providing food for waterfowl, juvenile blue crabs and many types of fish. Because they require clear water to survive, they are a closely watched indicator of the Bay’s health.

Grass beds had been steadily expanding in recent years. They covered 104,843 acres in 2017, which was the largest amount observed since Bay cleanup efforts began in the mid 1980s.

It's no great shock. Hurricane Agnes, in 1972 is widely credited with devestating the underwater grasses of the Chesapeake for years, as a result of massive freshwater and mud.
Posted by Fritz at 3:08 PM