I guess the Epstein Arkancide has damped the interest somewhat. But, from Sundance at CTH, Bongino Discusses Bruce Ohr 302 Release – “It’s the laundry operation”…

Political opposition research was created by Fusion-GPS and then sent to Steele so he could launder the information and return it to the DOJ and FBI, through Bruce Ohr, as an official “intelligence” product. 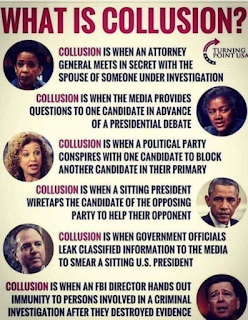 Liz Vaughn at Red State explains Why Does It Matter So Much That Ohr Maintained Contact With Steele After He Was Fired?


That’s interesting Dan, but what does that have to do with Ohr and Steele maintaining contact after Steele was fired?

We knew previously that Steele had leaked to the media as well and that he was the source for Yahoo!News’ Michael Isikoff’s article, published on September 23, 2016, which broke the news of the dossier. (By the way, the FBI used this article to corroborate the dossier in their FISA application. This is called circular reporting.)

At any rate, Steele lied to the FBI about leaking and once the FBI had submitted their application to the FISA Court which was based on the information contained in the dossier, he was fired. Steele’s FBI file indicates he is “not suitable for use.”

Yet, Bruce Ohr is encouraged by the FBI to remain in touch with Steele. Why?

Because there, in footnote 5 at the bottom of page fifteen of the FISA application, signed off on by James Comey, on October 21, 2016, it says Steele’s “reporting has been corroborated and used in criminal proceedings” and the FBI has determined him to be “reliable” and was “unaware of any derogatory information pertaining” to their informant.

And Steele knows where all the bones are buried.

Have we reached the point where they all start turning on each other? Christopher Steele was questioned for hours by Durham’s team.

From Sara Carter, Lindsey Graham: There Is Proof Of Systematic Corruption At Highest Level of DOJ and FBI

Even the Brits are bothering to take notice. The Daily Mail, Lindsey Graham in new attack on FBI accusing them of 'deep corruption' for keeping using golden showers dossier in court applications for eavesdropping warrants AFTER firing its author

From a year ago, Jeff Carlson explains How a Little-Known FBI Unit Helped to Disseminate the Steele Dossier

From Sarah Lee at Red State, ICYMI: Brennan’s Role In Russia Collusion Hoax Becomes Clearer (Despite What Appear To Be Multiple Perjuries)


The question of who knew the full scope of the Russia collusion hoax has, thus far, remained unanswered. The bit players like Bruce Ohr and Peter Strzok seemed to understand their role in carrying out what Strzok called “the insurance policy”, but surely someone knew what all the disparate moving pieces were doing.

As mentioned, that question is unanswered. But there are candidates, one being former CIA Director John Brennan, who has popped back up again in the news as someone who, even if he turns out to be simply one of the moving pieces in the larger scheme to denigrate the Trump campaign with false allegations of Russia connections, may have perjured himself (again) before Congress nonetheless.
. . .
The blame game continues but at some point the finger will land somewhere and on someone as the puller of puppet strings. As Brennan’s role comes more into focus, he’s becoming much easier to find behind the curtain.

Nick Short at ET, Did John Brennan Perjure Himself in Denying Use of Steele Dossier? Why not, perjury is all in a days work for Brennan. But in this case, he might not have needed to since he probably had a hand (in the form of Nellie Ohr) in writing it.

Linked by EBL Change Your Underwear, Gold Discovered In The Klondike: August 16, 1896, Woodstock 1969, August 15, 1945: Japan Surrenders, Jeffrey Epstein's Art: Bill Clinton in Blue,  Liz Wheeler of OAN, Grace Kelly and Brigitte Auber, What are the Russians up to in the high Arctic? and Natalie Imbruglia: Torn: An Anthem for NeverTrumpers and Postmodern Jukebox: ME! Sara Niemietz.
Posted by Fritz at 9:01 AM