So, now it's official, in her sloppy computer practices, Hillary Clinton was sending all her State Dept. email correspondence straight to China. If you've followed SpyGate from the beginning - and I have - then you know that it came out months ago via anonymous sources in news reports that all of Hillary Clinton's St. Dept. emails were being automatically copied & sent to a Chinese-related email account.So what changed today?  "Documentation was released that verifies these anonymously sourced prior news accounts."

NEWS: The metadata in Hillary Clinton's emails contained a Gmail address with the name of a Chinese company: "carterheavyindustries@gmail.com" according to documents released by a Senate committee yesterday.
— Ivan Pentchoukov (@IvanPentchoukov) August 15, 2019


You may remember that the original report on Hillary's emails said something like "they were almost certainly captured by a hostile foreign nation or hostile foreign nations," but then Comey and Strzok worked that language out to say the emails "may" have been accessed by another country.

And now: Oh no big deal, her system seems to have had a virus implanted into it that sent each and every email, including the top secret classified ones, to a drop box controlled by a Chinese company.

The system had been infected so that every email was sent to this address of a Chinese company, no matter who you actually intended to send it to, or not send it to.

And she did all of this because she didn't want to turn over any records to anyone -- no watchdogs with legitimate FOIA requests, no disclosure in response to a subpoena.

She decided she didn't want any Americans to have her emails.

But a Chinese front company? Sure, let's roll the dice on that one.


The media’s focus on Trump’s Russian connections ignores the much more extensive and lucrative business relationships of top Democrats with Kremlin-associated oligarchs and companies. Thanks to the Panama Papers, we know that the Podesta Group (founded by John Podesta’s brother, Tony) lobbied for Russia’s largest bank, Sberbank. “Sberbank is the Kremlin, they don’t do anything major without Putin’s go-ahead, and they don’t tell him ‘no’ either,” explained a retired senior U.S. intelligence official. According to a Reuters report, Tony Podesta was “among the high-profile lobbyists registered to represent organizations backing Ukrainian President Viktor Yanukovich.” Among these was the European Center, which paid Podesta $900,000 for his lobbying.

And the Ohr's are still in the news, Chuck Ross at Da Caller, Bruce Ohr Gave His Wife’s Fusion GPS Research To The FBI. Here Are The Documents. Not really news except that the documents have now been released.


Tom Fitton, the president of Judicial Watch said, “These documents show a crazed DOJ-FBI effort to use the Clinton spy ring at Fusion GPS, namely Nellie Ohr, to smear President Trump – even before he was sworn in as president.”

“Clinton campaign operative Nellie Ohr may as well as have had a desk at the Justice Department.”

They weren't crazed. They knew exactly what they were doing, and expected the evidence to be buried after Clinton won. At Flopping Aces Dan Sobieski writes of how Bruce Ohr’s FBI 302s Show Obama DOJ Led Deep State Coup Against Trump


If there was ever any doubt about the depth and extent of the deep state coup against both candidate and President Donald J. Trump and the number of deep state actors to thwart the will of the American people, it vanished with the release of partially redacted copies of former Deputy Atty. Gen. Bruce Ohr’s FBI 302 reports (interview summaries) on Thursday evening obtained by Judicial Watch.

They confirm that Bruce Ohr and his wife Nellie were not merely passive conduits for the fraudulent Steele Dossier but were active participants in the plot to deny Trump the presidency. They confirm the FBI knew the Steele Dossier, paid for by the DNC and the Hillary Clinton, was a fake when they applied to the FISA court for warrants to surveil American citizens. They detail the involvement of the State Dept. and others in the Obama administration.. As I wrote almost a year ago, Andrew Weissmann, touted as former Special Counsel Robert Mueller’s “pit bill” was kept in the loop by Ohr on any and all dossier and FISA developments.


These 302s show that the FBI and DOJ were warned repeatedly by Ohr that ex-British spy Christopher Steele was virulently biased against the target of their investigation, Trump.

That bias tainted the credibility of the “dossier” Steele composed and upon which officials in the Obama administration relied when they officially launched their counterintelligence investigation on July 31, 2016. The “dossier” was also the basis for the surveillance warrant against former Trump campaign adviser, Carter Page.

The FBI and DOJ ignored the warnings of bias and actively concealed it from the FISC. They never advised the judges that the information contained in the “dossier” was “unverified.”

They hid from the judges that it was all funded by the Clinton campaign and the Democratic National Committee (DNC).
. . .
To circumvent the rules they were breaking, the FBI set up an “information laundering scheme.” Steele would feed information to Ohr, who would pass it to his “handler” Joe Pienka, who would feed it to his partner Peter Strzok, who would give it to Andrew McCabe, who would deliver it to Comey.

Similar to a “money-laundering scheme,” the complex transfer cleansed the dirty information to obscure the original source –Steele. But the information, of course, was largely fabricated and/or the product of Russian disinformation.


Since when does the bureau oppose baseless conspiracy theories?
Heck, it peddles them.

The FBI spied on Donald John Trump using a baseless conspiracy theory to get a FISA warrant.

It was -- in the words of its Chief of the Counterespionage Section, Peter Strzok -- an insurance policy should America elect Donald John Trump president.

America did and the FBI cashed in its insurance policy, subjecting President Trump to a $32 million investigation that threatened his business, his family members, and anyone else associated with him.

Strzok was no rogue agent. He was a major player in the bureau.

Meanwhile, the FBI destroyed evidence that implicated Hillary in her email scandal. And only now that Epstein is dead does the FBI raid his Pedo Fantasy Island.

We know this is another search-and-destroy mission for the Clintons to guard them against indictment, just as destroying Anthony Weiner's laptop was.

The Naval Criminal Investigative Service (NCIS) examined Mr. Lovinger’s use of classified computer networks. In a 2018 report, the NCIS said its review “did not reveal any potential CI [counter intelligence] concerns,” according to a copy obtained by The Washington Times.

Mr. Lovinger’s attorney, Sean Bigley, has now filed a complaint with the Defense Department inspector general. He accuses Pentagon officials who targeted his client of a “serious ethics violation” by withholding the exoneration.

The NCIS probe was closed September 2018, and the report signed in November. Mr. Lovinger’s administrative trial began the next month.

Mr. Bigley is trying to convince the Pentagon IG that his client is a victim of whistleblower reprisal. Mr. Lovinger’s employer, the Pentagon Office of Net Assessment, accused him of mishandling “sensitive” material, a charge his lawyer said essentially is made up since there is no such classification.

Just the Real News has Hope Hicks response to Fat Jerry, a polite, but firm, stuff it you lying piece of shit. 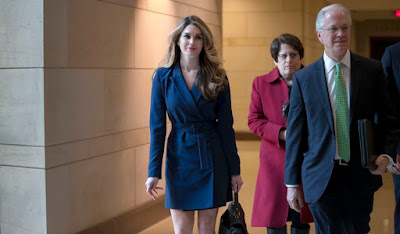