Almost nothing survived the weekend and Epsteins "Arkancide", except for a couple of articles on the Senate Select Committee on Intelligence from the obsessive sundance at CTH.


During the 2016 effort to weaponize the institutions of government against the outside candidacy of Donald Trump, the Senate Select Committee on Intelligence (SSCI) was headed by Richard Burr and Dianne Feinstein. After the 2016 election Senator Feinstein abdicated her vice-chair position to Senator Mark Warner in January 2017.

While the SSCI was engaged in their part of the 2016 effort Vice-Chair Feinstein’s lead staffer was a man named Daniel Jones. Dan Jones was the contact point between the SSCI and Fusion-GPS.

After the election, and after Feinstein abdicated, Dan Jones left the committee to continue paying Fusion-GPS (Glenn Simpson) for ongoing efforts toward the impeachment insurance policy angle.

Feinstein left because she didn’t want to deal with the consequences of a President Trump, IF he discovered the SSCI involvement. Dan Jones left because with a Trump presidency the SSCI, now co-chaired by Senator Mark Warner, needed arms-length plausible deniability amid their 2017 operations to continue the removal effort (soft coup).

The blueprint for this plausible deniability process, and ongoing soft-coup effort, first surfaces with Dan Jones appearing in the 2017 text messages between Senator Warner and the liaison for Christopher Steele, lawyer and lobbyist Adam Waldman:

Less than a month later you can see within the text messages that Christopher Steele is in direct contact with Dan Jones. “[Chris] said Dan Jones is coming to see you” etc. . . . 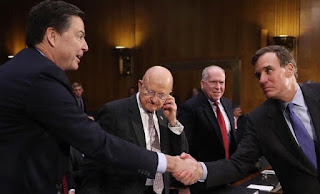 
In the first part of this research into the Senate Select Committee on Intelligence (SSCI) we outlined how the committee was engaged in the 2017 effort –with specific evidence of communication– to support Robert Mueller and the ‘soft coup‘ team. [See Here] When you understand what the group was doing in early 2017, you understand why the FBI had to use DOJ official Bruce Ohr as a go-between to contact with Chris Steele.

Now we move on to overlay several data-points that happened throughout 2018 that are connected to a much more troubling part of the overall issues. In 2018 the DOJ and FBI covered-up the corruption evident during the 2017 pre-Mueller effort.

The problem for Attorney General Bill Barr is not only investigating what we don’t know, but rather navigating through what ‘We The People’ are already aware of…. A branch of the United States government (Legislative) was attempting a coup against the leader of another branch of government (Executive); by using the Senate Intelligence Committee and designated corrupt agents within the executive branch cabinet.

This 2017 and 2018 time period covers Robert Mueller as Special Counsel, Jeff Sessions as AG, Rod Rosenstein as Deputy, Chris Wray as FBI Director, David Bowditch as Deputy and Dana Boente as FBI legal counsel. I’ll lay out the evidence, you can then determine who was powerful enough to have made these decisions. . .