The possibly pending McCabe indictment is the story du jour. Streiff at Red State, Department Of Justice May Be About To Indict Andrew McCabe And Peter Strzok

McCabe in not being indicted for an unauthorized leak, he’s being indicted for lying about authorizing and he had an immense motive, given the nature of the leak, to lie about his role. Plus, I’m sure that the discussion of his motive has been covered in prosecutorial memoranda on the case and it is damned unlikely the IG’s office would have referred this case for prosecution or that the USA would have proceeded to this stage unless there was a provable case.

What is at stake here is not small, it is really little short of the Department of Justice making a decision on whether the United States has a two-tiered system of justice where FBI officials can casually and callously lie to federal investigators and avoid any downside while a guy like George Papadopoulos gets sent to jail for a transposing the dates of his appointment to the Trump campaign with the date on which the campaign officially announced his position, or worse, be a Michael Flynn an have this particular lying sack of ordure decide that you lied to investigators when investigators had decided just the opposite. It would be hard to imagine that Barr and Rosen don’t know this, plus, I can’t imagine Rosen being all that keen on making a no-prosecution decision knowing what his Twitter timeline would look like the next morning after Trump’s first tweet.

Nothing would make me happier than if the FBI went full “Law and Order” on McCabe and waited until he was on the air in the CNN studio and barged in an handcuffed him on camera.

While former federal prosecutor Andy McCarthy takes the more in sorrow than in anger approach in McCabe and Papadopoulos: Two-Tiered Justice. Read the whole thing.


The date of a meeting, that’s all the lie was about.

George Papadopoulos claimed that a meeting he’d had with the mysterious Maltese professor, Josef Mifsud, happened slightly before the green-as-grass 28-year-old was recruited into the Trump campaign. In reality, it was slightly after.

It wasn’t a very important lie. It was of no consequence to the FBI or the special counsel’s investigation. Papadopoulos was such an afterthought that the Bureau did not bother to interview him until late January 2017 — about 10 months after he met Mifsud. By the time Papadopoulos was charged, the Trump–Russia investigation had been ongoing for well over a year — it was already clear that there was no conspiracy.

Yet that didn’t stop Mueller’s staff and Rod Rosenstein, their Justice Department superior, from indicting Papadopoulos on a felony charge. Nor did it stop them from exhorting a federal court to impose a sentence of incarceration. (The judge thought so little of the case, a prison term of 14 days was imposed.)
. . .
I couldn’t help thinking about the hardball treatment of Papadopoulos when, yesterday, CNN announced the hiring of Andrew McCabe as a commentator. McCabe, of course, was the FBI’s deputy director before being fired after the Justice Department’s inspector general, Michael Horowitz, concluded that he made multiple false statements to the FBI — including under oath. McCabe was questioned in connection with his leak of investigative information to the media. The leak may have damaged the FBI’s investigation of the Clinton Foundation (it certainly exposed information the Bureau was trying to keep under wraps).

Sundance at CTH goes straight to the conspiracy theory with Lawfare Expects McCabe Arrest – That Explains Why CNN Hired Him….. But there are real conspiracies and spygate appears to be one.


The Lawfare group are the external influence agents for corrupt politically motivated lawyers working in government. The group fingerprints show up everywhere including among “beach friends” and legal schemes hatched from the premise of their assembly. Lawfare = use the law as a tool in warfare. [Adult Alinsky disciples.]

The Lawfare group is headed by Comey’s friend Benjamin Wittes; and the group give resistance advice to ideologues inside government as well as outside organizations who are resisting (suing) the Trump administration. So when Benjamin Wittes announces to his ideological resistance followers:


…”You should thus expect charges against McCabe to be forthcoming any day. And if such charges don’t happen, that doesn’t mean they weren’t planned but, rather, that some extrinsic event has intervened”… (link)

It is almost guaranteed Andrew McCabe and his lawyer Michael Bromwich are in daily conversations with their network of friends inside Lawfare. This same ideological network has vast affiliates throughout media. The pending indictment of Andrew McCabe would explain why CNN hired him.

Knowing the DOJ was likely to indict McCabe, CNN could help frame a narrative that serves both their interests. That narrative was already in the New York Times article describing the potential for the indictment.

When McCabe is charged the media narrative will be it’s because he took the job with CNN… Trump/Barr weaponizing the DOJ and trying to kill free speech etc. CNN doesn’t have to defend their action in hiring a known liar, they’ll instead frame McCabe as a victim, a fellow traveler to the larger cause of justice – whose indictment is evidence of how far Trump and Barr will go to destroy their enemies etc.

Hey, at least now we know Andrew McCabe is about to be indicted.

He also has an interesting notion of how McCabes lies led to the IG finding all the Strzok/Page texts:


Andrew McCabe lied to INSD about leaking to the media when the INSD was investigating leaks to the media. McCabe’s statements contradicted the statements of his assigned DOJ lawer, Lisa Page; who said McCabe instructed and coordinated the leaks to journalist Devlin Barrett of the Wall Street Journal.

When confronted with two sets of competing stories, Lisa Page -vs- Andrew McCabe, it appears the IG-INSD asked Page if she could prove her side of the story. The need to prove her version of events appears to be the impetus for Page revealing her text messaging. Page’s texts proved her story, and proved McCabe was lying.

However, from that text messaging review (June/July 2017), in addition to texts between Page and McCabe, the investigation turned-up discussions between Lisa Page and Peter Strzok. 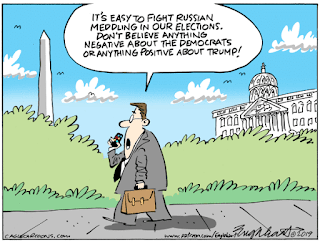 At American Greatness, Julie Kelly regrets Our Tawdry, Untrustworthy Fourth Estate. Well, don't we all? And one of the tawdry, untrustworthy members of the fourth estate, the WaPoo excuses McCabe in Justice Dept. could be nearing decision on whether to charge Andrew McCabe


It remains unclear whether McCabe will be charged — although the recent meeting shows that the case is alive. Trump supporters probably would be dismayed to see the Justice Department pass on the case, particularly because there were Trump allies who pleaded guilty to lying as part of then-special counsel Robert S. Mueller III’s probe. Charges against McCabe, on the other hand, could spark allegations from the left that he is being retaliated against for authorizing the investigation into Trump.

Both can be true.

Sundance also reports DOJ Stall Succeeds – Comey Memo/Archey Declaration Update – Expect Nothing Until After October 11th… Trump should just declassify them and get them out.

If you subscribe to the optimistic perspective the DOJ delay could be related to an intention to release the documents with the IG report(s). However, if you are more cynical, then the DOJ and FBI could be attempting to hide the institutional corruption visible inside the documents. Two possibilities.

Cynicism exists for a reason. At Da Caller, BARR: Lindsey Graham Doesn’t Trust The Courts Who Spied On Trump — But Trusts Them With Gun Control. The other Bob Barr.


Such extreme faith in state judges is misplaced; not because judges are inherently bad or dishonest, but because they are human, just as are presidents and members of Congress. When a judge is asked to place limits on an individual with the goal of preventing future acts of violence or harm committed by that individual, it is only natural for the judge to err on the side of caution. After all, what judge wants to be later blamed for not having taken such anticipatory action, when subsequent harm results (even though judges enjoy essentially absolute immunity for rendering such decisions wrongly).

One should never "trust" the government. It's composed of people, venal, fallible and biased, like you and me.
Posted by Fritz at 8:30 AM