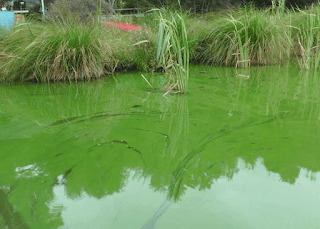 
Algae blooms can happen in Maryland lakes and rivers, as well as the Chesapeake Bay. New warnings are out after pet deaths in other states from toxins produced by the bacteria. And officials in Anne Arundel and Montgomery counties issued fresh warnings Aug. 13 about the dangers of swimming in lakes with high algae content.

Microcystin, a hepatotoxin, can cause harm to the liver of humans and pets if ingested. Of particular concern are dogs that are off-leash and may swim and/or drink from the lake, despite park regulations. Montgomery Parks urged visitors to avoid direct contact with water while boating or fishing, and keep dogs on leash so they don't drink or come in contact with the water. 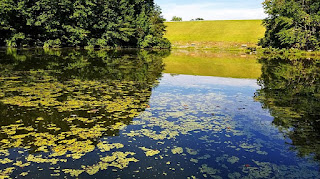 Anne Arundel County Department of Health reminded residents that a health advisory against direct water contact for Lake Waterford in Pasadena because of an algae bloom has been in place since July 3 and continues. Signs have been posted at the lake to warn visitors.
The blooms of blue-green algae reported at Lake Waterford naturally occur in fresh waters and in Maryland's Chesapeake Bay.

And in mid-July the Maryland Department of Natural Resources found potentially harmful algae during a water sample taken from the North East River near Charlestown in Cecil County, WJZ reports. 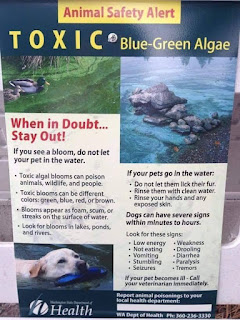 Reports nationwide of dogs dying after swimming in ponds containing blue-green algae have surfaced in the past week.

In North Carolina, Melissa Martin and Denise Mintz took their three dogs — two West Highland terriers and a goldendoodle mix — on a doggie playdate to swim in a pond and play in the mud. Within minutes of leaving the pond, one of the dogs began having a seizure, owner Melissa Martin said on Facebook. By the end of the night, all three dogs were dead, the victims of blue-green algae poisoning, according to the dog owners.

"At 12:08 AM, our dogs crossed the rainbow bridge together," Martin wrote. "They contracted blue green algae poisoning and there was nothing they could do. We are gutted. I wish I could do today over. "

Microcystis is a freshwater algae, so it's not particularly a threat to this part of Chesapeake Bay, but it has been known to bloom in some of the freshwater tributaries, but I might have to keep Skye from drinking in the pond on Calvert Beach until it cools off.
Posted by Fritz at 5:41 PM