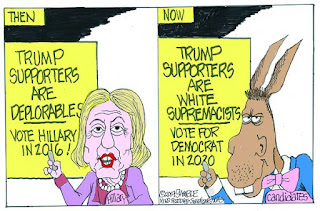 In the beginning of the Trump administration, the Times geared up to cover the Russia affair, Baquet explained. "Chapter 1 of the story of Donald Trump, not only for our newsroom but, frankly, for our readers, was: Did Donald Trump have untoward relationships with the Russians, and was there obstruction of justice? That was a really hard story, by the way, let's not forget that. We set ourselves up to cover that story. I'm going to say it. We won two Pulitzer Prizes covering that story. And I think we covered that story better than anybody else."

But then came the Mueller report, with special counsel Robert Mueller failing to establish that the Trump campaign conspired or coordinated with Russia to fix the 2016 election. "The day Bob Mueller walked off that witness stand, two things happened," Baquet continued. "Our readers who want Donald Trump to go away suddenly thought, 'Holy shit, Bob Mueller is not going to do it.' And Donald Trump got a little emboldened politically, I think. Because, you know, for obvious reasons. And I think that the story changed. A lot of the stuff we're talking about started to emerge like six or seven weeks ago. We're a little tiny bit flat-footed. I mean, that's what happens when a story looks a certain way for two years. Right?"

Baquet used the gentlest terms possible — "the story changed" — but the fact is, the conspiracy-coordination allegation the Times had devoted itself to pursuing turned out to be false. Beyond that, Democrats on Capitol Hill struggled to press an obstruction case against the president. The Trump-Russia hole came up dry.

Now, Baquet continued, "I think that we've got to change." The Times must "write more deeply about the country, race, and other divisions." 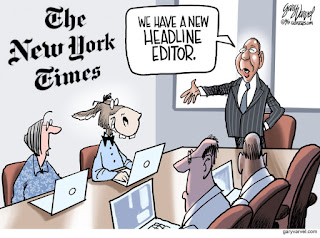 
So basically, that meeting was called because the New York Times accidentally told the truth in a headline.

York also noted about the meeting that "no one could be surprised that a recording of it leaked, possibly by Times employees who want to push Baquet in an even more anti-Trump direction."

As someone noted in the comments at Powerline, The Times is making an extraordinarily valuable campaign contribution to the Democrats. 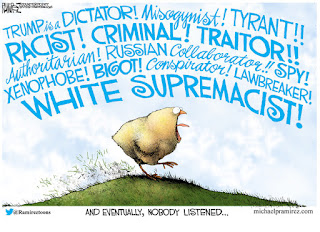 
Former executive Times editor Abe Rosenthal told me many years ago, he wanted it to be said of him: "He kept the paper straight." Indeed, those words are on his gravestone. As the story . . . makes clear, playing it straight is not the Times' mission now.

They covered it better than anybody else. Won two Pulitzers. And it was all a hoax.

So, maybe there is a White Supremacy Hoax. too!

From sundance at CTH, Former AG Matt Whitaker: Everything About Bruce and Nellie Ohr “Was Very Concerning”…


Delivering a statement directly from the files of ‘captain obvious‘ former AAG Matt Whitaker notes that everything about Bruce and Nellie Ohr was sketchy.

Political opposition research was paid for by Hillary Clinton and created by Fusion-GPS (Glenn Simpson and Nellie Ohr).  That oppo-research was then sent to Chrisopher Steele in the U.K. so he could launder the information and return it to the DOJ and FBI, through Bruce Ohr, as a semi-official “intelligence” product.

Within the released documents provided to Judicial Watch the last FBI interview of Bruce Ohr (May 15th, 2017) took place two days prior to the appointment of special counsel Robert Mueller; and one day before Rod Rosenstein took Mueller to the White House. . . .


We may never learn all the details of Hillary’s email frolic, but we probably don’t need to. What we know for sure is bad enough: she ignored statutes and State Department rules by creating a technically incompetent off-the-books email system that was easily vulnerable to penetration by foreign powers. She did this in order to evade the Freedom of Information Act and to keep secret matters relating to her job duties that the American people were entitled by law to know (and perhaps other things as well).

In the Obama administration, Clinton was no outlier. Other senior Obama officials did the same or similar things–Obama’s EPA head conducted official business using a private email account in the name of her dog–and President Obama himself was well aware of Hillary’s improper conduct. He emailed Hillary at her “secret” email address using an alias. The rank incompetence on display here is stunning.

Forget it John, it's Clinton World.