Do I Need Russiagate Anonymous?

Hell no, I can quit anytime I want. Just not today. First off, via the Wombat's In The Mailbox: 08.21.19 and  as introduced by this Twitchy post Jeff Carlson at The Epoch Times has an epic article, Focus in Spygate Scandal Shifts to CIA, Former Director Brennan, which provides a good Spygate summary, including this little nugget.

Steele’s first dossier document, dated June 20, 2016, noted that “a dossier of compromising information on Hillary Clinton has been collated by the Russian Intelligence Services over many years.”

Which raises a good question, recently posed by internet researcher Nick Weil on Twitter: “When the FBI got the tip from Alexander Downer that the Russians had Hillary’s 33k emails, the appropriate action would have been to re-open Mid Year Exam, no?”

Rather than deciding to re-examine the “Mid-Year Exam” investigation, which looked into Clinton’s handling of her emails and use of a private server, the FBI instead used this information to establish an investigation into the Trump campaign.

The answer is, of course, that they already knew the source of the "information" and knew it was bogus, having planted it themselves through the Mysterious Mr. Mifsud. It's a long article, but read it all to remind yourselves of just how lawless the US intelligence agencies have become under Obama. And they continue to stymie efforts to disclose their crimes. Sundance at CTH, Incredible – FBI Blocking Release of Unredacted Text Messages Between Lisa Page and Peter Strzok…


Judicial Watch is fighting for one of the more critical buckets of “declassified documents” from within Spygate that has never made sense.  This goes to the heart of a two-year-long contention: Why were the Page/Strzok text messages redacted in the first place?  Why are their unredacted text messages being protected?  Who benefits from this roadblock?

The FBI wants to wait until AFTER the 2020 election to release the Lisa Page and Peter Strzok text messages?  Whiskey – Tango – Foxtrot !Enough. This alone should be like a million warning flares shooting skyward simultaneously for those who demand justice.

These are critical questions. Actually, long-standing and unresolved questions that we have carried for two years. On December 1st, 2017, the day after Michael Flynn signed a coerced guilty plea, the first batch of text messages between Lisa Page and Peter Strzok became public. Who the hell released them? Why? …and ultimately what national security issue exists that would require them to be redacted?

These are open, non-encrypted, messages – using government phones – between a DOJ lawyer assigned to former FBI Deputy Director Andrew McCabe and FBI Special Agent Peter Strzok. The content did not travel through protected and/or classified systems. So why were the text messages redacted when they were made public?

No-one has ever answered these questions. I have more, but those basic questions are the starting point -that creates the foundation of suspicion- of a thoroughly corrupt CURRENT DOJ and FBI set of officials. FBI Director Christopher Wray, Deputy FBI Director David Bowditch and FBI legal counsel Dana Boente {Go Deep} are at the epicenter of this specific issue.

Why would those current FBI officials be fighting the public release of those messages?

What functional value was there to give AG Bill Barr declassification authority, if he is going to participate in allowing FBI officials to hide material that shouldn’t even be classified in the first place?

If this in-our-face position doesn’t scream of a cover-up, then nothing does.


Sen. Lindsey Graham told Fox News host Sean Hannity on Tuesday that he plans to meet with Attorney General William Barr this week to discuss how best to roll out the SpyGate documents that will soon be released to the public.

"I’m going to meet the attorney general this week to talk to him about how best to tell the story," Graham, who is the chairman of the Senate Judiciary Committee, said. "I don’t want people to conjecture as to what happened. I want you to read it."

The senator said he wants the American people to see the 302s (transcripts of FBI interviews with witnesses), the full Foreign Intelligence Surveillance Act (FISA) warrant applications taken out against former Trump campaign associate Carter Page, and the transcripts of the "confidential informants" who spoke with campaign aide George Papadopoulos.

"I want you to hear in real time that the guy said 'I'm not working with the Russians. If I were, it would be a crime of treason,'" Graham said, referring to the exculpatory information that the FBI left off of their FISA application.

Graham noted that the media will try its best to ignore the "damning and ugly" information when it comes out. "You'll only find it on Fox. You may find it a little in the paper," he predicted. "It will get ten percent of what the Mueller report got." He went on to suggest that investigators should start focusing on former president Obama if they want to get to the bottom of what happened.

"Here's the question. It's not what did Obama know and when did he know it? Who told him?" Graham asked. "And what did he do when he was told? I want to know who briefed the president about their counterintelligence investigation against the Trump campaign. When you find that person, you're going to unravel the riddle here."
He added: "Did they open up a counterintelligence investigation not to protect the country -- but to get Trump?"

And an oldie that I may have missed, IG Horowitz Has 'Concluded that the Final Three FISA Extensions Were Illegally Obtained,' diGenova Says, which is a pretty good intro to Byron York at WaEx, What we need to know from the Horowitz report


There's one big potential problem that people on Capitol Hill are talking about, and that is the issue of classified information. Everyone expects a significant amount of Horowitz's report to be classified. How much, no one is quite sure. But the fact is, the report was done to tell the American people what the nation's intelligence and law enforcement agencies did during the 2016 election. Issuing a report with page after page blacked out would not be a good way to do that. But no one will know the extent of the classification issue until Horowitz is ready to go public.

And even if it were entirely declassified, Horowitz will not tell the whole story of spying and the 2016 election. Horowitz is the inspector general of the Justice Department and does not have the authority to investigate outside the department. For example, he cannot probe the actions of the Central Intelligence Agency and its then-director John Brennan during the period in question.

That will be the role of another investigator, John Durham, the U.S. attorney appointed by Barr to investigate the origins of the Trump-Russia probe. Durham is working with the support of top Republicans on Capitol Hill, like Senate Judiciary Committee Chairman Lindsey Graham, who recently said, "I really am very curious about the role that the CIA played here."

But first, the Horowitz report. It will be an important step in answering the questions of how much spying took place and whether it was justified. It's long past time Americans learned what happened. 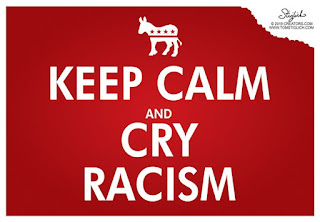 And at Althouse,  "What was the embittered left — Democratic presidential candidates and their media allies — supposed to do when their hopes of Russia-Trump collusion crashed on the boulevard of broken dreams?"


"Pivot. They had invested so much in their fantasy that President Donald Trump was a treasonous agent of Russian boss Vladimir Putin. But when special counsel Robert Mueller’s report came out, and there was no collusion, no crime charged, their fantasy collapsed. And so, after a brief spasm of despair, the left pivoted to their default position: race. Race. Race. Race. Race. Race.... In the short term, Democrats and their media allies are using race and charges of 'white supremacy' to herd those 60 million or so Trump voters back into Hillary Clinton’s basket of deplorables. But once you brand 60 million people as 'white supremacists,' and 'Nazis,' what can you do with them?"

So now their talking up racism and recession.
Posted by Fritz at 8:33 AM