Russiagate: Will McCabe Be Prosecuted?

It's shaping up to be another nice, coolish day here in Slower Maryland. We'll let's get down to business. Andy McCabe is back in the news, as, after his hiring by CNN as an objective commentator, DOJ is Close To A Decision On Charging Andrew McCabe from John Sexton at Hot Air. Kinda makes you wonder what CNN was thinking.


I’d love to see this happen but I’m skeptical and here’s why: This guy just got a job at CNN. Would CNN have hired him if there was an imminent chance he’d be prosecuted? I don’t think so. Seems more likely to me they held off until they were pretty certain this cloud was about to dissipate. Anyway, Fox News is reporting it could happen:


Federal prosecutors appear to be close to a decision on whether to charge former FBI official Andrew McCabe over the circumstances that led to his firing from the bureau last year, Fox News has learned.
A source close to the process said that McCabe has had a “target on his back” because of the Justice Department inspector general findings against him over actions during the Hillary Clinton email investigation, as well as his role in the surveillance warrants against Trump campaign associates during the Russia investigation. McCabe is a former deputy and acting director of the FBI.
The New York Times, which first reported the developments Monday, said McCabe’s lawyers recently met with DOJ attorneys who would handle a prosecution – an indication of a possible indictment.


According to reporting today from the New York Times, Washington DC U.S. Attorney Jessie Liu has punted the decision on whether to indict former FBI Deputy Director Andrew McCabe back to Main Justice, via Deputy AG Jeffrey Rosen.

All of our prior research into the DC U.S. Attorney’s office, specifically toward Jessie Liu, has identified her as -essentially- Rod Rosenstein in a skirt. Attorney Liu’s DC office was responsible for not prosecuting the Awan Brothers; and also Liu’s office was responsible for covering up the leaking of the classified FISA application by SSCI Director of Security James Wolfe. Yes, covering it up – there is ZERO DOUBT.

Both cases were clear law-breaking, and both highly politically charged.

Today the Times is reporting on leaks from officials connected to the DC office of Ms. Liu, framing her deference of the McCabe indictment back to Main Justice.

And some snark from Ace, Prosectuors Nearing Decision on Whether to Indict CNN Contributor Andrew McCabe


Calling him "CNN Contributor" is accurate, but I wouldn't have thought of that without Jack Prosobiec reminding me.

He should be prosecuted if for no other reason that lying to the FBI is one of the favorite harassing charges used by the DOJ team in general and the Mueller team specifically. We need to send a message that such behavior is not tolerated within the DOJ while being prosecuted against "regular citizens"  And the trial should be held in Utah, away from anti-Trump DC juries. Give him the same choice Papadopuolos had, plead guilty and get a few weeks in jail, or see yourself bankrupted by attorney's fees.

Also from sundance, DOJ is still fighting to keep the Comey Memo's hidden, Request for Stay – DOJ Stalls For More Time Before Forced Production of Comey Memos… There may be good reasons to keep some of it secret, but at this point the need to understand what the DOJ and FBI were doing in the 2016 election out weighs that need. Especially since they might be concealing the role of the "5 Eyes" "allies" in interfering in our election. Fuck 'em.


Below is an example of the redacted information in the Archey Declarations that Judge Boasberg had previously ruled must be released with the redactions removed. This is what the DOJ and FBI are working to stop, stall and delay from being released to the public: 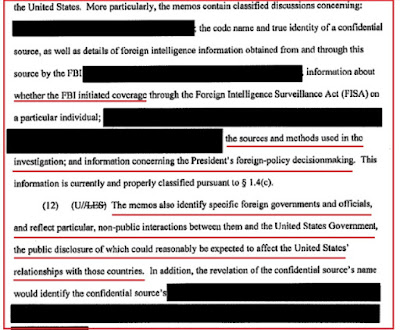 Ohr, the wife of high-ranking DOJ official Bruce Ohr and a contractor for Fusion GPS in 2015 and 2016, put together reams of research purporting to show connections between Trump, his associates, his family, and numerous other figures, including those with ties to the Russian government. Bruce passed all of this information along to the FBI, showing the FBI was receiving Fusion GPS-linked information not just through the infamous "dossier" from British ex-spy Christopher Steele, but from the wife of a key DOJ official too.

The new documents, revealed by conservative watchdog Judicial Watch, detail hundreds of pages of emails between Bruce Ohr, Nellie Ohr, and DOJ officials, and show Nellie’s research was delivered by Bruce to investigators after Trump won in 2016. Two large research documents — a “Who’s Who” of alleged Trump-Russia connections and a “Manafort Chronology” — were given to the FBI by Bruce in December 2016.

The greatest mystery to me is why Bruce Ohr is still at DOJ, albeit demoted. Is he giving Horowitz's and Durham's teams everything the need in hopes of getting out with his pension intact? Is he not media savvy enough for a CNN gig?

Da Beast accuses Rudy Giuliani of  Jumping on the Seth Rich Conspiracy Bandwagon. Well, it still is kind of mystery. I doubt we'll ever find out who killed Rich, but now that we you need to be officially exonerated by the DOJ to be clear of suspicion, we can continue to pin it on the Clinton/DNC cabal. My own theory is that it was Elizabeth Jennings, cleaning up loose ends.

And, via the Wombat's In The Mailbox: 08.26.19, the Victory Girls have a great cartoon, that's too big to steal and embed. Obsession: White Supremacy and the Democrat Pivot
Posted by Fritz at 7:43 AM