“Go stick a television camera on Peter Strzok or James Comey, and just say the name Patrick Bryne. You will see a former director of the FBI crap his pants,” he said unabashedly during an appearance Thursday evening on Fox News’ “The Story with Martha MacCallum.” 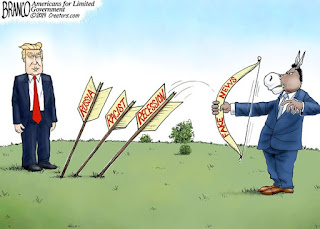 According to JD Heyes at NewsTarget, Confirmed: Obama knew about, and was DIRECTING, the “Spygate” coup attempt against Trump from the very beginning. Seems likely. If not, he was derelict in his duty.


Earlier this week during an interview with Fox News’ Sean Hannity, Andrew McCarthy, attorney and former federal prosecutor who specialized in national security cases, said “counterintelligence operations” which is what Spygate was, at its core, are “done for the president.”

That means, as The Gateway Pundit notes, they are executed specifically to inform the commander-in-chief.

Hannity asked if the president knew about the investigation from the outset, wouldn’t he have been updated on its progress?

“Sean, if things were working properly the president should have been alerted about it and informed. It was a very important investigation,” McCarthy added.

“If they actually believed what they were telling the court that it was a possibility that Donald Trump was actually a plant of the Kremlin, it would have been derelict on their part not to keep the president informed,” he added.

BREAKING: Bush press secretary Ari Fleischer said "I guarantee the answer is yes" to whether Obama knew Halper & others were deployed to spy on Trump campaign. Fleischer explained that no FBI director would put informants inside a presidential campaign w/o the prez authorizing it
— Paul Sperry (@paulsperry_) May 24, 2018


Here is what we know. High-level FBI officials complained to the highest executive offices of the FBI that Strzok and more top agents were engaged in sexual relationships with CNN’s on-air personnel. Those high-ranking sources say top management did not investigate the reports and the relationships continued. And the sexual romps still might continue today. 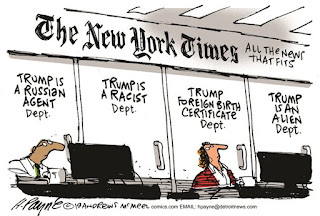 We need names and faces. And speaking of FBI agents in bed with CNN, Tristan Justice at Da Fed,  CNN Just Paid Off Another Corrupt Deep State Leaker (Andy McCabe) With A TV Contract. And at BPR, CNN loses it over Sanders hire, welcomes disgraced McCabe. Consistency for CNN consists of consistently overlooking the faults of its friends and inventing those of it's enemies.


McCabe was fired for repeatedly lying to federal investigators under penalty of perjury & referred for prosecution by the IG.

Let’s call an 🍎 an 🍎: CNN hired an established liar because he hates Trump. The high horse has been put out to pasture. https://t.co/9z1UcIatom
— Guy Benson (@guypbenson) August 23, 2019


From Larwyn's Linx, the Quote of the Day:


QOTD: “I’m sure it is just a coincidence, but FBI Special Agent Peter Strzok’s wife, Melissa Hodgman, happens to be the Assoc. Director of the SEC Enforcement Division, who happened to be leading the SEC investigation of Peter Byrne’s company [Overstock.com].

So the wife of the FBI agent who was directing Patrick Byrne in the sketchy FBI operation targeting Donald Trump… just happens to open an investigation of Byrne shortly after the corrupt FBI operation containing her husband first hit the headlines in early 2018.

I wonder if the elimination of that SEC investigation was worth, oh, say $1 billion.

From the Right Scoop,  Here’s the WHOPPING amount the Mueller investigation cost the taxpayers…


Meh, mere rounding error in the federal budget. They made that back on money they confiscated from Manafort allegedly. The real crime was investigating nothing for 2 years and keeping Trump under the gun.

And to what effect? Paul Bedard, WaEx, Support for impeachment at lowest level of 35%: Poll