Some Hot and Sticky Russiagate

Well, it looks like we're in for a streak of hot and sticky weather. Hot news from Daniel Chaitin at WaEx, Trey Gowdy: FBI gave 'two different kinds of defensive briefings' to Trump and Clinton in 2016 and dropped another bomb

During a Sunday interview on Fox News, Gowdy referenced how the campaigns of both Clinton and then-candidate Donald Trump received counterintelligence "defensive" briefings, but claimed they were not the same. Gowdy said the FBI provided "two different kinds of defensive briefings to candidates depending on who you like and who you don't," and coupled with how the FBI withheld transcript material from the FISA court, "then your bias begins to impact the investigation."

But concerns remain. Trump's briefing was coordinated by Strzok, which raised red flags among Republicans. According to Rep. John Ratcliffe, R-Texas, it made no mention of the counterintelligence investigation into members of the Trump team that he opened less than three weeks prior.

In recent weeks Gowdy, who was chairman of the Oversight Committee until he left Congress at the beginning of this year, has spoken out about classified information he claims “has the potential to be a game changer.” Last month he discussed unreleased transcripts of recorded conversations between FBI informants and former Trump campaign associate George Papadopoulos. Gowdy said “one in particular has the potential to actually persuade people" and noted this "exculpatory evidence related to Papadopoulos was not included in the Foreign Intelligence Surveillance Act applications targeting former Trump campaign adviser Carter Page."

Soon afterwards, Trump delegated Attorney General William Barr sweeping powers to declassify documents on surveillance activities into Trump campaign as part of his investigation into the origins of the Russia investigation.

In his interview with host Maria Bartiromo on Sunday, Gowdy called for the transcript to be released so the American public can view them. Gowdy, now a contributor of Fox News, said they were persuasive enough for him to change his mind after initially being "supportive" of the appointment of special counsel Robert Mueller to carry out the Russian interference in the 2016 election.


Former Republican South Carolina Rep. Trey Gowdy said Sunday that his “perspective” of the special counsel’s investigation changed after he saw a transcript of an interaction between the FBI and a Trump campaign associate believed to be George Papadopoulos.

“I was supportive of [Robert] Mueller. I was supportive of the idea to initiate, to investigate what Russia did, but when I saw this transcript, it actually changed my perspective,” Gowdy said in an interview on Fox News’ “Sunday Morning Futures.”

Republicans have hinted at the existence of a transcript that contains exculpatory information for Papadopoulos, who the FBI claims was the catalyst for its counterintelligence investigation of the Trump campaign.

Papadopoulos had encounters with several mysterious figures during his stint on the Trump campaign. He met Maltese professor Joseph Mifsud, Australian diplomat Alexander Downer and Stefan Halper, a former Cambridge professor who was identified as an FBI informant in 2018.

Ace, Trey Gowdy: I Supported Mueller, Until I Saw the Still-Classified Papadopolous Transcript and the Exculpatory Information Therein - And withheld from the FISA court.

Courtesy of the Wombat's In The Mailbox: 06.24.19 Dan Sobieski at AmThink tells us how Clapper Hears Barr's 'Chilling' Footsteps. I hope he's losing sleep over this.


Close scrutiny of the Intelligence Community's actions should send chills up Clapper's spine. In the search for the answer as to how the whole Mueller collusion probe and spying on Team Trump originated, one does not have to look far. One needs only to revisit the interview Deep State conspirator and perjurer James Clapper gave with CNN's Anderson Cooper. He points his finger directly at Barack Hussein Obama as leader of the coup against Donald Trump:


Former Obama administration director of national intelligence James Clapper admitted that former president Barack Obama gave the order to Peter Strzok to kick off his Operation Crossfire Hurricane targeting of President Donald Trump.
Obama — who also gave a stand-down order on stopping alleged Russian hacking — was personally implicated in the plot according to Peter Strzok and Lisa Page's texts. Clapper confirms the obvious.
This is James Clapper's interview with Anderson Cooper, which confirms that Obama ordered Strzok to carry out an Intelligence Community Assessment (ICA), which became the basis for the entire Mueller probe.
"If it weren't for President Obama we might not have done the intelligence community assessment that we did that set up a whole sequence of events which are still unfolding today, notably Special Counsel Mueller's investigation. President Obama is responsible for that. It was he who tasked us to do that intelligence community assessment in the first place," Clapper said in his Anderson Cooper interview.

That Intelligence Community assessment would have included in it the "unverified and salacious," as former FBI director James Comey described it, dossier paid for by Hillary and the DNC and compiled from Russian disinformation source by British agent Christopher Steele in the only real collusion with Russia in this whole affair.


Boente took over for former chief legal counsel James Baker, after the discoveries around Baker and McCabe could no longer be hidden. After being removed from responsibility eventually Baker resigned and went to work with the Lawfare group.  Boente’s job at FBI was/is to bury information, block congressional inquiry, and protect the crew. Boente, along with Christopher Wray, is still there.

In a Fox News interview on Sunday, Nunes said “someone at the FBI” appears to have been “determined to hide” then-Deputy Assistant Secretary of State Kathleen Kavalec’s notes from both the FISA court and Congress.  Our research identified that “someone” as Dana Boente and crew more than a year ago. . .

Also, President Trump on AG Jeff Sessions: “That was my biggest mistake”… It might be a high bar, but it also might be true. And Sunday Talks: Shifty Schiff Outlines Coordinated Plan With Mueller For “Testimony”…

From Axios, Massive leak of Trump transition vetting documents shows "red flags" deliberations but from Matt Maroglis at PJ Media, 15 Reasons Why No One Should Care About the Leaked Trump Transition Vetting Documents 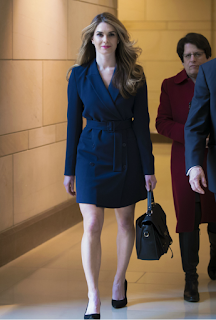 
Democrats on the committee nonetheless pushed the Russia collusion narrative by attempting to portray an email Hicks received from the editor-in-chief of the Russian internet newspaper Vzglyad as evidence of a Russian conspiracy. Democratic Rep. Joe Neguse flipped to the much-referenced Robert Mueller report to read the special counsel’s finding that “one day earlier the publication’s founder and former Russian parliamentarian Konstantin Rykov had registered two Russian websites, Trump2016.ru and DonaldTrump2016.ru.”

But Neguse’s attempt to implicate the Trump campaign in Russia’s online efforts to interfere in the election failed badly. “I don’t recall receiving the interview request,” Hicks noted, “I received hundreds of interview requests, sometimes daily.” Because Trump had no intention of participating in the interview, Hicks explained, she was not concerned about the identity of the outlet, and hadn’t even realized until after the fact that the email had come from a Russian. 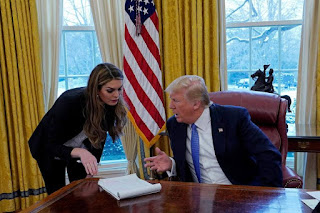 Concerning the WikiLeaks hacks, Hicks made clear that the only discussion the campaign had was “speculation about if there would be more emails or information released, but that was prompted by things in the media,” and it wasn’t with certainty that more leaks would happen, but “with speculation and skepticism.”

“No,” Hicks stressed, Trump did not talk about WikiLeaks or the hack, nor did anybody else in the campaign, other than what was discussed in the public domain. Hicks also testified that during the campaign she had heard nothing about Roger Stone and his supposed relationship with WikiLeaks or its founder Julian Assange, or about WikiLeaks’ “divulgence of information about the emails of Hillary Clinton and Mr. Podesta,” beyond media coverage. 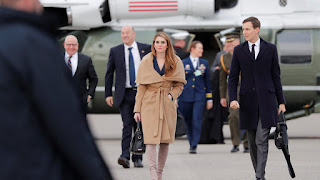 And  Top 8 Takeaways From Hope Hicks’s Congressional Testimony 1. It Was a Dog and Donkey Show, 2. The Media Lapped Up Democrats’ Narrative, Of Course, 3. More Proof Against Trump Collusion, 4. Much Questioning Unconnected to Congress’s Oversight, 5. Hope Wasn’t About to Jump Through Their Hoops, 6. Democrats Were Too Dense to Notice Hicks Threw Lots of Shade, 7. Hope Hicks Is Hilarious, 8. Hope Hicks For Congress. 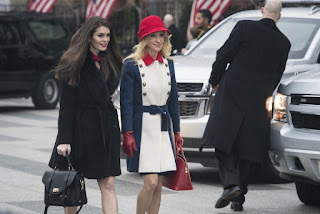 Congress? Hell, she'll be eligible for President in 2024, just in time to succeed Ivanka. Anyway, read the whole thing. And now, after falling off the cliff and having the anvil land on their heads with Hope Hicks, Democrats plan to tackle Kelly Conway. Reuters, U.S. lawmakers threaten to subpoena Trump aide Conway

The House Oversight Committee, chaired by Democrat Elijah Cummings, said it would vote on a potential subpoena if Conway does not testify before lawmakers at a scheduled Wednesday session focused on her alleged violations of the Hatch Act.

The 1939 law prohibits executive branch employees from engaging in some political activities.

So, from the WaPoo, White House moves to bar counselor Kellyanne Conway from testifying to Congress about alleged violations of Hatch Act

The Hatch Act is a useful tool to keep rank and file government workers from abusing their authority, but for the inherently political jobs in the upper administration, it's just silly.


The Democracy Forward Foundation, a D.C.-based 501(c)3 nonprofit, was founded in 2017 to "help expose the rampant corruption in the Executive Branch and fight in court on behalf of the people it hurts." The group also has a 501(c)4 "social welfare" arm that goes by Democracy Forward. The foundation has filed suit against numerous government agencies, such as the Department of Justice, Department of Treasury, and the Office of Management and Budget, and has aided other entities with similar litigation, including Baltimore's lawsuit against the Trump administration over immigration policy.

The group, which has maintained a relatively low profile despite its litigation efforts against the administration, dubs itself "nonpartisan" and is referred to as "anti-corruption" by major media outlets. The group's leadership, however, is made up of Democratic operatives, including Podesta himself.

Democracy Forward's initial tax returns, which cover a time span of just over a month from May 19 to June 30, 2017, does not disclose its donors but shows that the group received $705,000 in seed money. The group lists a P.O. Box in D.C. as its address on the forms, the same contact address that is listed on its website.

Jonathon Toobin at Da Fed, If ‘Lock Her Up’ Was An Outrage, So Is ‘Let’s Put Him In Prison’


One needn’t excuse anything Clinton, Trump, or any other Democrat or Republican has done to understand that this mindset is toxic to our political culture in ways that go far beyond the damage we think our opponents will do if they gain control of the government. The most distressing aspect of this trend is the lack of faith in the ability of our constitutional systems to survive bad presidents. 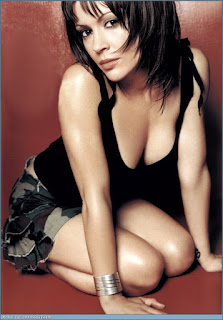 And some lightness from AllahPundit at Hot Air. Livestream: Famous Liberal Actors Gather To … Act Out The Mueller Report?


To cleanse the palate, I … guess it’s worth watching Luke Skywalker ham it up as Corey Lewandowski or whoever? There’s nothing better to do on a slow news night.

Plus, hey: It has the official John Kerry seal of approval.

That’s a weird mix of actors whom I’d pay to see — Kline, Lithgow, Weaver, the “Seinfeld” twins — and actors whom you couldn’t pay me to see. Like Alyssa Milano. The livesteam starts below at 9 p.m. ET. Exit question: Who plays Mueller? Gotta be Kline, right?

If Alyssa Milano were to play Hope Hicks, in the nude (NSFW), It might make it worth suffering through the BS to watch....

Wombat has Rule 5 Sunday: Cheryl Ann Tweedy and FMJRA 2.0: Even Better Than The Real Thing working toward your amusement and education.
Posted by Fritz at 9:24 AM