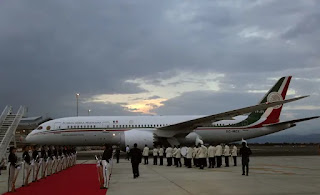 “About how much this plan is going to cost, let me say, we have the budget,” López Obrador said at a Wednesday press conference with Mexican Foreign Minister Marcelo Ebrard. “It would come out of what we’re going to receive from the sale of the luxurious presidential plane.”

The Mexican president said he expects the plane to sell for at least $150 million and that the country would also sell off other aircraft to pay for the deal. 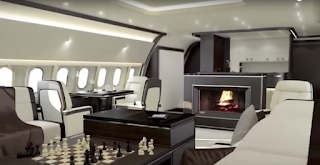 The Mexican president’s Wednesday announcement that the proceeds would go towards controlling illegal immigration comes after Trump said Tuesday that he would let Mexico be the ones to release the details of the new immigration deal.

"You would freeze-action it, you would stop it, you would analyze it," Trump said, refusing to release the deal. "I'm going to let Mexico do the announcement at the right time."

Ebrard said at the press conference that his country had started its deployment of 6,000 National Guard troops to Mexico’s southern border shared with Guatemala.

“Starting from today, and in the coming days, the deployment is going to progress rapidly,” Ebrard said.

Also, Althouse catches on to the blank page lie:  I'm catching up with the news about President Trump's not-actually-blank sheet of paper.


I saw the stuff on Trump's sheet of paper that he waved about as representing the deal with Mexico. It was a prop, so nothing seemed really to hang on whether that sheet of paper had any words on it, but for those looking for whatever can be used against Trump, it was their prop too, and so symbolic — blank, like Trump himself.


Now, I'm seeing the news about the sheet of paper is that at one point Trump held it up and you could see that it was folded up and — because of the sunlight — that it wasn't blank.


“You were able to read it through the sunlight,” Mr. Trump told reporters at a press conference a bit sheepishly. “That was not anticipated.”

“the Government of Mexico will take all necessary steps under domestic law to bring the agreement into force with a view to ensuring that the agreement will enter into force within 45 days.” @realDonaldTrump #Mexico agreement. Second photo flipped @washingtonpost @postpolitics pic.twitter.com/lWuJU9bpYK
— Jabin Botsford (@jabinbotsford) June 11, 2019


Sheepishly? Or is he playing us? I don't know that he didn't "anticipate" that his antagonists would go nuts over a seemingly blank sheet of paper and then get caught when close examination of the photograph revealed that there was text in there.


“I just give you my word, inside here … is the agreement,” he said at [on Tuesday]. “That’s the agreement that everybody says I don’t have.”

The president said he would “love” to show the actual text of the agreement to journalists, “but you will freeze action it, you will stop it, you will analyze it…”

And then it turned out that the text could be read, through the reverse side of the paper. It said:

Once the press went through its routine of mocking the lack of text and then the discernment of the text...


The president marveled to reporters on Wednesday, “It was closed, and you were able to read it through the sunlight. I did not do that on purpose.”

Marveled, theatrically. Oh, you reporters got the better of me! Really? I think he got the better of them. They performed his little story, showing their fake-newiness, then peeking into his private paper and doing a big reveal on the text, then having the benefit of showing it without being responsibility of showing it, and giving us the feeling that we now have really seen the agreement. And yet we haven't!

Linked at Pirate's Cove in the weekly Sorta Blogless Sunday Pinup and links.
Posted by Fritz at 10:03 AM