Russiagate: The Dean of Scandals

So did you hear the Dean testimony? I listened to it off and on yesterday and made it through. It was well worth hearing the Republicans grilling him over just what the hell he was supposed to be contributing. WaPoo (30 day pass), After detour to Watergate, House Democrats gain little traction on impeachment

But committee Republicans repeatedly mocked Democrats for bringing in Dean — a star witness from nearly a half century ago who has a CNN contract — and several other former U.S. attorneys who have television deals and have criticized Trump. None was involved in Mueller’s investigation.


“Remember, the point of these hearings is to put on a show, have selected segments air on television and disseminated on the internet, hope the public turns to support impeachment and then go forward with impeachment. Sadly for Fat Jerry, the NYC helicopter crash directed media coverage away from the Judiciary’s freak show so he didn’t get the intended media coverage.”

From Charlie Hoffman at WaFreeBe, Democrats Complain Nadler’s Investigations Into Trump Are ‘All Hammer, No Finesse’


"They have all hammer, no finesse," one lawmaker reflected about Nadler and his committee's strategy regarding their investigations of President Trump.

"Nadler is just a sailor," said a separate unnamed Democratic lawmaker. "You need a pirate," to lead the investigations into President Trump, the lawmaker explained.

Politico, Pelosi-Nadler clash over impeachment intensifies. At WaEx, Byron York asks Dems' Trump dilemma: Impeach, imprison — or bluff? In the end, I think they'll do it. Capt. Ed again, Pelosi: Come On, We’re “Not Even Close” To Backing An Impeachment Inquiry.

Sean Spicer at Breitbart, Dems Need to Realize Mueller Probe Is Over — John Dean Testimony ‘Full-Blown Circus’. Wasn't that good for a circus. Too many clowns, not enough chicks on the high wire. Sean Spicier is funnier.

Averting a contempt citation (for now) the Justice Department Agrees To Turn Over 'Most Important' Mueller Evidence To House (Daily Wire), and Capt. Ed asks Did Nadler Cave?


Nadler may get less than expected. That’s because the Trump White House will work with the Justice Department to decide what exactly the committee gets to see, two senior administration officials told The Daily Beast. And, so far, the White House has not waived executive privilege regarding any of Mueller’s materials, the two officials said.

Nadler doesn't want to see anything. He wants the issue. This keeps it alive. But WaPoo, Stepping up Trump clash, House votes to enforce Barr and McGahn subpoenas

More bad news for Nadler, Attorney General Barr Sends DOJ Review Scope Letter to Chairman Nadler (full pdf)… (Sundance at CTH). He won't be happy with the probe. At the Epoch Times, Jeff Carlson cites Mark Meadows: ‘There’s a Cover-up Within Certain Realms at the FBI’ . From FrontPage, Did DOJ Reward Bruce Ohr for Targeting President Trump? Probably, but the Feds are pretty promiscuous when it comes to handing out bonuses. It's not their money!


"The pay records of James Comey, Lisa Page and Peter Strzok might also be of interest, along with members of Robert Mueller’s team, including Mueller himself. Only a fool would fail to look into it. 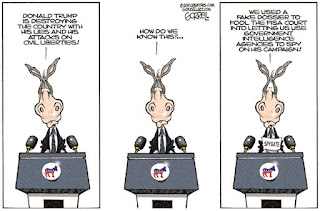 
Former British spy Christopher Steele, author of the infamous anti-Trump dossier bearing his name, was introduced by a key State Department aide to top executives of a firm founded by President Bill Clinton’s former White House Chief of Staff Mack McLarty, according to documents made public on June 10 by Judicial Watch.

In multiple email threads included in the documents, Jonathan Winer, then the U.S. Department of State’s special coordinator for Libya, acts repeatedly on behalf of Steele, arranging meetings for him with other current and former top U.S. officials, as well as influential consultants and strategists like those at the McLarty firm.


“It’s the biggest lie that I’ve ever seen perpetrated on the American public, and it’s whipped everyone up,” Penn continued. “I would have liked to have seen our politicians at the end of the day, after the Mueller report came out, get together and say, ‘We thought maybe there was something there, but there wasn’t.’ And they didn’t.”

In an old statement he'll probably flip on, In the 1990s, Joe Biden said William Barr was "one of the best" attorneys general


"As I know you know, but others should know, too, I truly enjoyed working with you when you were attorney general," Biden told Barr, who had served as President George H.W. Bush's attorney general in the early 1990s. "You were one of the best I have ever worked with, and there have been a lot of attorneys general since I have been here, and I mean that sincerely."

I don't think the old head sniffer has a sincere bone in his body. But he fakes it pretty well.
Posted by Fritz at 8:45 AM