A light load, even my usual sources failed me. From AmGreat: Russian Hack or CrowdStrike Ruse?

Imagine a husband reports that his wife has been murdered but refuses to let the authorities examine her body and, instead, submits an autopsy report by a private investigator he’s commissioned who used to work for one of the officers leading the investigation and that the report just so happens to accuse someone with whom the private eye has an ax to grind.  That’s what has been going on with the government’s various investigations into the alleged Russian hacking of the DNC.

But now, thanks to Mueller’s indictment of Stone, we find out that the husband didn’t even give the authorities the final report he commissioned but, instead, only let them see a redacted draft version. If a local police department behaved in this way, there would be outrage accompanied by a great deal of skepticism about the conclusions of the report for which the husband paid accusing someone its author just so happens to detest of the most serious possible crime.

And via The Wombat's In The Mailbox: 06.20.19 and Power Line: What Was Mueller Up To? His Victims Speak.


Earlier this month RealClearPolitics posted Paul Sperry’s intensely reported account of the Mueller investigation from the perspective of its objects in “‘Scorched Earth’: Mueller’s Targets Speak Out.” Sperry prefaced his report:


Now that [Special Counsel Robert] Mueller has ended his probe finding no election collusion between the Trump campaign and Russia, 10 witnesses and targets of his sprawling, $35 million investigation agreed to speak with RealClearInvestigations because they no longer feel in legal jeopardy. They include several people who became household names during the two-year probe – including George Papadopoulos, Carter Page and Roger Stone – as well as lesser-known figures whose lives were also upended and finances imperiled when they came into Mueller’s crosshairs. Only three of the 10, Papadopoulos, Stone and a political consultant named Sam Patten, were charged with a crime. Patten received three years probation but no jail time for failing to register as a foreign agent; Papadopoulos served 12 days for lying to federal agents; and Stone awaits trial on false statements, witness-tampering and obstruction charges.
Their firsthand accounts pull back the curtain on the secret inner workings of the Mueller probe, revealing how the special counsel’s nearly two dozen prosecutors and 40 FBI agents used harshly aggressive tactics to pressure individuals to either cop to crimes or implicate others in felonies involving collusion.

Sperry’s mind-boggling account seems to have escaped attention. Is this the way it was supposed to go down? While some of the stories are familiar, they remain shocking. Moreover, several of the stories Sperry tells are unfamiliar. I learn from Sperry’s account that our old friend Michael Ledeen was caught up in the Mueller probe . . .

Immediately go read the Sperry article. Some of the stories are familiar to people who read these posts, but some are not, but all suggest prosecutorial misconduct to me. And a great article by John Solomon at Da Hill too, FBI, warned early and often that Manafort file might be fake, used it anyway. So instead, they leaked it to the press, and used the article resulting from that leak about it to claim probable cause to search Manafort's bank records.


The second document, known as the “black cash ledger,” remarkably has escaped the same scrutiny, even though its emergence in Ukraine in the summer of 2016 forced Paul Manafort to resign as Trump's campaign chairman and eventually face U.S. indictment.
In search warrant affidavits, the FBI portrayed the ledger as one reason it resurrected a criminal case against Manafort that was dropped in 2014 and needed search warrants in 2017 for bank records to prove he worked for the Russian-backed Party of Regions in Ukraine.

There’s just one problem: The FBI’s public reliance on the ledger came months after the feds were warned repeatedly that the document couldn’t be trusted and likely was a fake, according to documents and more than a dozen interviews with knowledgeable sources.

For example, Ukraine’s top anticorruption prosecutor, Nazar Kholodnytsky, told me he warned the U.S. State Department’s law enforcement liaison and multiple FBI agents in late summer 2016 that Ukrainian authorities who recovered the ledger believed it likely was a fraud.

“It was not to be considered a document of Manafort. It was not authenticated. And at that time it should not be used in any way to bring accusations against anybody,” Kholodnytsky said, recalling what he told FBI agents.
. . .
Special counsel Robert Mueller’s team and the FBI were given copies of Kilimnik’s warning, according to three sources familiar with the documents.

Submitting knowingly false or suspect evidence — whether historical or to support probable cause — in a federal court proceeding violates FBI rules and can be a crime under certain circumstances. “To establish probable cause, the affiant must demonstrate a basis for knowledge and belief that the facts are true,” the FBI operating manual states.

But with Manafort, the FBI and Mueller’s office did not cite the actual ledger — which would require agents to discuss their assessment of the evidence — and instead cited media reports about it. The feds assisted on one of those stories as sources.

If true, Manafort's convictions should be thrown out as fruit of the poisonous tree. And the leakers should be jailed. Ace: Shock: The FBI Used Another "Dossier" It Did Not Verify and In Fact Was Specifically Warned Might be Fake, to Start an Investigation into Paul Manafort


Remember, it was critical to Hillary Clinton that the FBI have active investigations opened into the Trump campaign, because she had a high profile investigation into her own actions, and she desperately needed to be able to play the They Do It Too Card.

Our shining knights of fidelity, bravery, and integrity were all too eager to provide her with just that card.

Joseph Klein at Frontpage Mag. Trump-Haters Salivating Over Supreme Court Double Jeopardy Decision. A new decision by the Supreme Court allowing both state and federal charges for the same acts is no help to Manafort. The author is not amused.

And speaking of Trump haters, from WaPoo's (30 day pass) Harry Litman, Paul Manafort’s transfer from Rikers Island shows how corrupt the DOJ really is. Apparently, liberals are cool with extra-judicial punishment these days. Manafort will be tried either way, why punish him with Riker's while he waits? 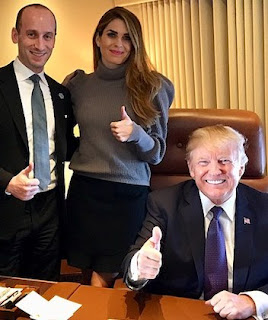 
In Michael Wolff's now discredited book, 'Fire and Fury,' the author claims that Hicks, one of President Trump's closest allies and a key player in the 2016 campaign, had an on-and-off relationship with Trump campaign manager Corey Lewandowski who happens to be married.

The supposed affair was never confirmed, but that did not stop Rep. Nadler, while using your tax dollars, to "mistakenly" refer to Ms. Hicks several times as 'Ms. Lewandowski' during the closed-door hearing. Nadler, by the way, is the chairman of this committee and is supposed to be a leader for his colleagues.


Chairman Nadler. No, sir. Are you asserting any privileges in declining to answer the question?
Mr. Purpura. We are not, Mr. Chairman.
Chairman Nadler. Ms. Lewandowski?
Ms. Hicks. As a former senior adviser to the President, I'm 12 following the instructions from the White House. 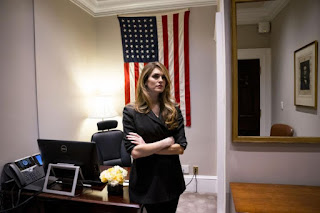 
Chairman Nadler. Ms. Lewandowski -- sorry -- Ms. Hicks, read the next two sentences also if you have it.
Ms. Hicks. Sure. The President directed that Sessions should give a speech publicly announcing -- the dictated message went on to state.

Finally Hicks, who was supposed to be there to answer questions relating to the Russian investigation, defended herself and corrected Rep. Nadler. On page 25, this interaction happened:

So there are three things going on here. The first is that Nadler genuinely thought her last name was Lewandowski, in which case he should not be asking questions if he does not even know who he is speaking with. The second is that he was not paying attention and needs assistance focusing. Or the third, and the most likely reason, is that he was simply trying to throw a few jabs to knock Hicks off her game by hinting at her alleged affair. If I were a betting man, I'd take the third option in this scenario which makes Rep. Nadler a total jackwagon.

Which is being over-polite. And from Josh Rogin at WaPoo, State Department official didn’t disclose ties to the boyfriend of Russian agent Maria Butina


The State Department official in charge of U.S. arms control negotiations with Moscow and her husband had a years-long friendship with GOP operative Paul Erickson, the former boyfriend of convicted unregistered Russian agent Maria Butina — ties this official did not disclose to her superiors or to Congress during her confirmation process in the spring of 2018.

Erickson officiated the June 2017 wedding of Andrea Thompson, the undersecretary of state for arms control and international security affairs, and David Gillian, a former senior Australian army officer, three administration officials and Erickson’s lawyer have confirmed. At the time, Thompson was serving as national security adviser to Vice President Pence. Four months before the wedding, Gillian had transferred Erickson $100,000, which federal officials allege Erickson stole from Gillian, FBI and court documents show. Thompson never disclosed these ties to her superiors until approached this week by this columnist, the three administration officials said.

The wedding took place about six months before Erickson and Butina were publicly identified as being connected to Russian influence operations inside the United States. But by the time of Thompson’s confirmation, allegations of the couple’s influence activities had been widely reported.

Sen. Robert Menendez (N.J.), the ranking Democrat on the Senate Foreign Relations Committee, told me that his panel will investigate Thompson’s lack of disclosure to both Congress and the FBI.

Sounds like an attempt to backdoor an allegation of Russian collusion.