Reason #6379 that Trump was Elected

Despite a drumbeat of scientific warnings, the Trump administration Wednesday issued a new rule that cuts carbon emissions from power plants by less than half of what experts say is needed to avoid catastrophic global warming.

The Affordable Clean Energy rule, issued by the Environmental Protection Agency, represents the Trump administration’s most significant action to unwind federal regulations aimed at addressing climate change. At the EPA on Wednesday, Trump’s top aides, Republican lawmakers and state business leaders celebrated it as proof that the president had delivered for his constituents in coal country.

Under the Trump rule, utilities are expected to cut emissions 35 percent below 2005 levels by the end of the next decade. But to avoid global average temperatures from rising beyond 2 degrees Celsius, the U.S. electricity sector would need to cut its emissions 74 percent, according to the International Energy Agency.

Let's cut off all the blue states. Except mine, of course; Maryland is too small to matter.


Unlike the Obama administration’s 2015 Clean Power Plan, the new rule does not set specific greenhouse gas emissions cuts for each state. Instead, it allows state regulators to determine how utilities can improve efficiency and will not force companies to switch from coal to lower-carbon energy sources.

This was all made possible by EPA's endangerment finding for CO2 which declares methane leaks from natural gas production and pipelines, and manmade carbon dioxide emissions from burning fossil fuels, cause dangerous global warming that poses an imminent danger to the health and wellbeing of Americans.

1. about to happen. "they were in imminent danger of being swept away"
synonyms: impending, at hand, close, near, approaching, fast approaching, coming, forthcoming, on the way, about to happen, upon us, in store, in the offing, in the pipeline, on the horizon, in the air, in the wind, brewing, looming, looming large;

Your definition of imminent may differ. Also from the article : 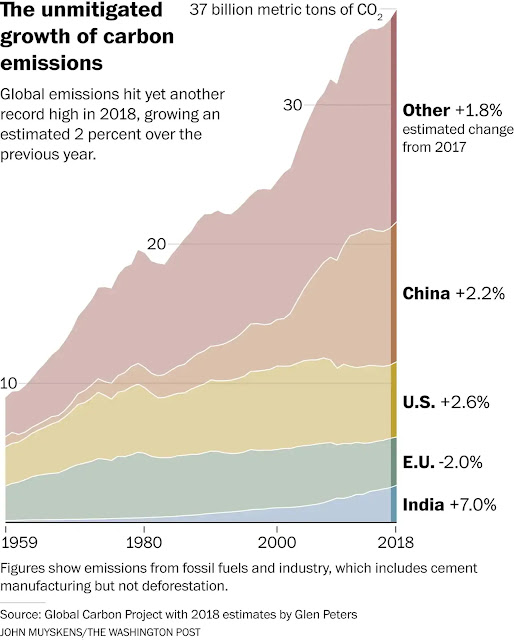 The U.S. looks pretty flat for the last 10 years.

Linked at Pirate's Cove in the weekly Sorta Blogless Sunday Pinup and links.
Posted by Fritz at 4:04 PM