Will do ya! Not much going on; between the Democratic debates and the G20, the news is mostly looking elsewhere, but Sundance at CTH is looking at the plans for the Mueller testimony with a jaundiced eye: Details Emerging of Coordinated Mueller Testimony With Congressional Democrats… 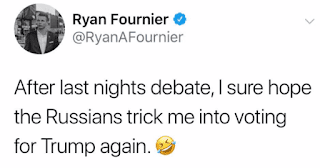 The baseline here is very important. As we have outlined throughout, and especially since the Democrats won the mid-term election, the Mueller “team” is closely coordinating with the Pelosi, Schiff, Nadler and Cummings group about how best to continue the efforts of the Weissmann and Mueller small group within the DOJ and FBI.

The connective tissue between House Democrats and the “Small Group” within the FBI (Weissmann and Mueller lead), is the Lawfare group. As noted in the text message between Lisa Page and Peter Strzok; and as noted in the hiring of former FBI legal counsel James Baker; and as noted in the Nadler and Schiff hiring of Lawfare members for their staff; the coordination between the seditious group (DOJ/FBI) and the politicians is crystal clear.

CTH advised everyone to pay close attention to the details in the agreements between Pelosi, Schiff, Nadler and the corrupt team led by Robert Mueller. Everything they are doing is based on a coordinated plan between ideologues. The effort to remove President Trump is one long continuum… it has not stopped. The Mueller testimony is just another part of this process.
. . .
Pay attention to how these are being structured. Two open sessions with limited questions, and only one opportunity for questions by each member of the committee.
. . .
Notice the closed session without Mueller. This is with Andrew Weissmann and the key members of his investigative unit. This is the heart of the real corruption. Mueller is only the figurehead. Weissmann is the real lead, and the closed door session allows the Democrats to use the Weissmann testimony.
. . .
Limiting the exposure of Mueller is a way for Pelosi, Schiff and Nadler to mitigate the risk. Only one round of questions.
. . .
Nice trick here. Notice the closed door sessions are not classified. This is the way for Pelosi, Schiff and Nadler to get the material -the innuendo and suspicion- injected into their narrative.

The unredacted content will be discussed; that means all of the investigative pathways, including the maliciously corrupt false trails will be put into the discussion. AND the politicians are free to talk about any/all content of that discussion because it is not classified.


The U.S. intelligence community established that China hacked Hillary Clinton’s unauthorized email server when she served as the secretary of state, according to Rep. Louie Gohmert (R-Texas).

In an interview with The Epoch Times published on June 26, Gohmert said that the Chinese “actually hacked Hillary Clinton’s personal server—as our intel community established without any question—even though the FBI refused to ever examine the evidence.

“There’s no question, China was involved,” he added.

Gohmert is the first lawmaker to publicly confirm that China was the foreign actor that hacked Clinton’s server. President Donald Trump is the only other official to have made the same claim.