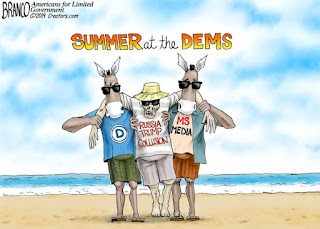 Rep. Devin Nunes threatened to send a ninth criminal referral regarding the Trump-Russia investigation to the Justice Department if he does not receive information he requested about British ex-spy Christopher Steele, and accused those who still push the Russian collusion conspiracy of being "possessed."

The California Republican sent letters Friday to FBI Director Christopher Wray and U.S. Attorney John Durham, who is conducting a review of the origins of the Russia inquiry. He asked about records the Bureau received in October 2016 that show a top official at the State Department undermining Steele's credibility. Steele authored a dossier, filled with salacious and unverified claims about President Trump's ties to Russia, that was used by the FBI to obtain Foreign Intelligence Surveillance Act or FISA warrants to wiretap onetime Trump campaign adviser Carter Page.

In a Fox News interview on Sunday, Nunes said someone at the FBI appears to have been "determined to hide" then-Deputy Assistant Secretary of State Kathleen Kavalec's notes from both the FISA court and Congress. In the last session, when Nunes was chairman, the House Intelligence Committee conducted its own investigation into Russian interference in the 2016 election.

"So they have until Friday to get it to us, and if they don't, we will make our ninth criminal referral," Nunes told host Maria Bartiromo on "Sunday Morning Futures." "Basically, we won't know exactly who at the FBI obstructed justice, but — Durham or the Department of Justice should be able to figure it out because there's e-mails that went around, and somebody decided not to give it to the Congress."


Former FBI Director James Comey was fired in May 2017 just a few hours after the bureau’s top leadership drafted a letter to Congress that “muddled” his congressional testimony the week before.

Comey was terminated by President Donald Trump on May 9, 2017, the same day the Senate Judiciary Committee received the letter concerning Comey’s May 3, 2017, testimony claiming that Abedin made a “regular practice” of forwarding “hundreds and thousands” of emails from the Clinton system to her husband’s laptop computer.

Abedin’s husband is former Rep. Anthony Weiner (D-N.Y.), who the same month in 2017 pleaded guilty to sending obscene photos to a minor. He was released from prison earlier this year.

“Director Comey spoke of hundreds and thousands of emails being forwarded from Ms. Abedin to Mr. Weiner’s laptop computer,” FBI Assistant Director Gregory Brower wrote in the letter to the committee.

Brower said 49,000 emails were forwarded, but only “a small number were a result of manual forwarding” to Weiner by Abedin. A dozen of the emails contained classified government information, he said.

Comey wasn't much of a "facts" guy.

Also from Dan Chaitin, Ex-top CIA official perturbed by John Durham's review of intelligence analysts. CIA upset at thought they might be spied on.


"I see no problem with a DOJ review of whether the CIA and other intelligence community agencies lived up to their legal and regulatory responsibilities related to how they handled any information related to U.S. persons — U.S. citizens and U.S. nationals," Morell told CBS News, where he is now a senior national security contributor.

"Having said that, I see a DOJ review of whether or not the intelligence analysts made the right call as wholly inappropriate. I cannot ever remember a DOJ review of analysis," Morrell added.

"[Durham] and his team have no experience with, or knowledge of, the process of intelligence analysis," Morell said. "He and his team could well impose a law enforcement standard in coming to a conclusion — a much higher bar than exists in the intelligence community for analytic judgments."

You mean, kind of like Weissman inventing all kinds of obscure reasons why Trump committed obstruction of justice while providing all the information he asked for?
Posted by Fritz at 7:25 AM