Every so often, the Case of the Missing Blonde becomes a national media sensation. This is predictable — the public has an insatiable appetite for these damsel-in-distress stories — and nine times out of 10, the story ends with police finding her body and then the public loses interest, with the trial of her accused killer attracting little notice. It was the mystery of her disappearance that caused the excitement, and once she’s just another dead girl (usually murdered by an ex-boyfriend), the TV audience interest isn’t quite the same. In the case of missing college senior Mackenzie Lueck, however, her story just took an unexpected turn:


Missing University of Utah nursing student Mackenzie Lueck is a ‘sugar baby’ who sought out men over the age of 35 online, DailyMail.com can reveal.
Lueck, 23, disappeared on June 17 after landing in Salt Lake City, Utah, and taking a Lyft ride to meet a mysterious man in a park around 2am.
The college senior’s social media accounts reveal that she considered herself a sugar baby, and boasted about having at least two unidentified sugar daddies which she found through online sites Seeking Arrangement and Tinder.
DailyMail.com obtained screenshots of Lueck’s posts made nearly three months ago in a private Facebook group where Lueck gave advice on how she finds sugar daddies – wealthy older men who lavish younger women with gifts and money in return for company or sexual favors.

. . .
Let’s be blunt: Mackenzie Lueck was a whore. Also notice my use of the past-tense verb “was” — they won’t find her alive. And her parents will have to ask themselves how they failed so badly: Why did their daughter turn into a whore? This has become a widespread phenomenon . . . 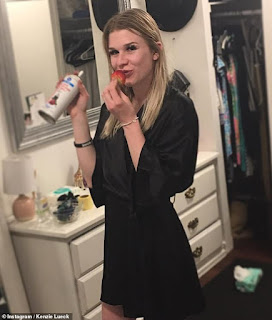 
Went to bed early Thursday night — it was a long day — and woke up early to start putting together my thoughts on the Democrat debate I missed, but then started engaging the comments on “Missing College Girl Mackenzie Lueck Was a Social-Media ‘Sugar Baby’ Whore.” This inspired some thoughts that I want to record while they’re fresh in my mind, and I’ll get to the debate commentary later. As I said in that post:
If you criticize the “sugar baby” racket, feminists will condemn you for “slut-shaming.” They openly advocate the most irresponsible promiscuity, and consider any criticism to be “sexist.” . . .


Feminist “empowerment” means that there are no moral standards for women, so that the college girl will never encounter anyone in authority on campus who would dare to tell her that whoring around via social media is a bad idea.. . .

Anyone with common sense could have told her that whoring herself out as a “sugar baby” was a bad idea, but she was in a bubble, using her private online accounts to conceal this behavior from anyone who might criticize it. Apparently, her friends knew what she was doing, but using social media and dating apps to hustle cash is considered acceptable by many college girls, so she was shielded from any sort of common-sense warnings about the risks involved in this form of “empowered” sexuality.

“Don’t be a whore” is always good advice, but Third Wave feminist ideology effectively prohibits any criticism of female sexual behavior. Because well-mannered men wish to avoid offending women, a sense of chivalry may lead men to cooperate with this prohibition, and some men will play “white knight” by rushing to defend Mackenzie Lueck (and other girls in the “sugar baby” racket) from any condemnation. . .

to the sad news from today, Mackenzie Lueck Is Dead; Police Charge Ayoola Ajayi With Murder


One person has been taken into custody Friday morning in relation to the disappearance of University of Utah student Mackenzie Lueck, Salt Lake City police announced.
Further details on the arrest — which came a day after police finished searching a home whose owner they identified as a person of interest — were not immediately available.
Lueck, 23, was last seen meeting an unknown individual around 3 a.m. on June 17 near a park in Salt Lake City after being dropped off by a Lyft driver.
Salt Lake City police are expected to reveal more about the arrest at a press conference at 1:30 p.m. ET.

UPDATE: Mackenzie Lueck is dead. Ayoola ‘AJ’ Ajayi, 31, has been charged with aggravated murder, aggravated kidnapping, obstruction of justice and desecration of a body. DNA evidence confirmed that charred remains found at Ajayi’s home were those of Lueck.
. . .
UPDATE III: A frightening angle in the case:


A handyman in Utah told Fox News exclusively on Friday the suspect arrested in the murder of a University of Utah student had asked to build a secret, soundproofed room in his home’s basement with hooks on its walls. . . .
Brian Wolf, a local contractor, told Fox News on Friday the individual who owned that home reached out to him in April and asked him to build a “soundproof” room there.
“He slowly added on other requests, like building a secret door and adding hooks to the wall,” Wolf said, explaining how the individual asked him to come to the home and give him an estimate for the potential project.
Wolf added the person said he wanted construction done as soon as possible, “before his girlfriend got back into town.”
The contractor, who owns a home-repair business in Utah, said he was “weirded out” by the whole scenario and turned down the job offer, telling the individual he was too busy. . . .
Meanwhile, a neighbor of the homeowner who is a person of interest told Fox News on Thursday “many women” frequented his home.
“There were always so many women coming in and out at all hours of the night,” the neighbor, who did not want to be identified, told Fox News.

Were these “women coming in and out” prostitutes? As previously reported, Mackenzie was prostituting herself through “sugar baby” sites. Here is a report from Inside Edition on her “seeking arrangements” . . .

She didn't deserve this, but she put herself in danger.
Posted by Fritz at 6:54 PM