It's About Dam* Time

Ace, (a few days old) Female Track Runner, Sidelined Due to Boys' Making the Girls' Team Ahead of Her, Plans to File Title IX Complaint


Her theory -- and see if you can follow this arcane argument -- is that Title IX, being enacted to promote girls sports to an equal (or, let's face it, superior) level to boys' sports, is being violated when schools start filling their "girls" sports rosters with boys. 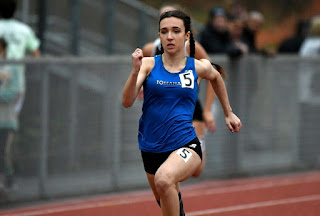 
Selina was recently sidelined by not one but two men who beat her: After finishing behind a group that included a couple dudes in the 55-meter dash, she was unable to compete in the New England regionals.

She said she was being retaliated against by school officials for complaining: 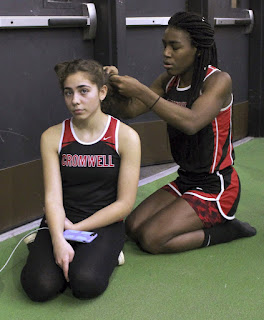 
Three girls from a Connecticut high school have filed a federal discrimination complaint against a statewide policy on transgender athletes. The girls say that these policies are hurting them; they missed out on top finishes in races and possibly even on college scholarships. 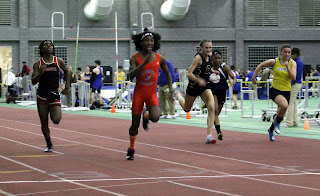 Girls deserve to compete on a level playing field. Women fought long and hard to earn the equal athletic opportunities that Title IX provides. Allowing boys to compete in girls' sports reverses nearly 50 years of advances for women under this law. We shouldn't force these young women to be spectators in their own sports.

Connecticut's policy on transgenders is downright insane. Students have to be treated according to the "gender with which they identify." The result is that male students, who say they identify as girls, are dominating girls' sports. Just look at the photo above from the AP of high school transgender athletes Terry Miller and Andraya Yearwood finishing first and second, while their "biological" female competitors (read: girls) are nowhere to be seen. 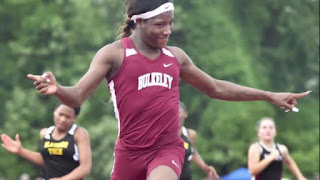 Jazz Shaw at Hot Air, The Most Widely Cited Study On Transgender Athlete Performance Was Garbage


The first glaring error was the size of this study. It consisted of only eight subjects who were self-reporting their performances online.

Those who argue transgender athletes should be allowed to compete with women often cite the work of Joanna Harper as evidence that biological men who suppress their testosterone levels do not have an unfair competitive advantage against women. But the study really doesn’t prove anything from a scientific standpoint.

Harper freely admits this. “I’m certainly not suggesting that one study of eight athletes in one sport is in any sense a definitive study,” Harper told The Daily Caller. “But it was a start, and it’s got people interested in doing more research. There’s probably ten, twenty more years, probably, of work that needs to be done on this, but we’ve started.”

Many irreversible changes in the body come from the exposure to testosterone in the womb and growing up, including increased muscle mass and speed. Supressing testosterone later may have a deleterious effect, but does not restore to body to the unaffected state (which is essentially female).


Aside from only including eight athletes in a single sport, the collection of the data was shoddy. The online participation allowed for no direct, third-party verification of the race results being reported. Harper herself was unable to verify half of the results for six out of the eight subjects. Most of them submitted times from races of different lengths rather than offering matching criteria for testing. And, as alluded to above, all eight of the subjects were volunteers. There was no random selection done and no control group to compare them against.

There are plenty more issues with this study that you can read at the link, but that’s not the only alarming thing about this story. As the DC notes, this wasn’t just some private study that’s being bandied about as fodder for social media spats. . . .

The IOC and the other international sports federations need to get a handle on this. Women’s competitive sports is being turned into a mockery and too many young girls are being discouraged from trying to compete after seeing some boys come along and blow them all out the tournament. Perhaps they could start by commissioning a scientifically valid study to replace the one being discussed here. The results might wind up opening some eyes. In the meantime, they could consider adding events that are specific to transgender and intersex athletes. It would at least be a start. 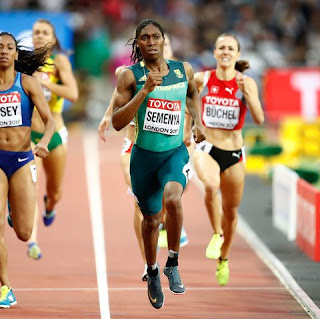 We had to kill women's sports to "save it" for the 0.03%. Personally, I don't have a dog in this fight; my kids weren't all that much into sports. Maybe we need to bottom out.

And one of the few truly sad cases. IAAF: Caster Semenya Is “Biologically Male”


The last time we checked in on the debate over intersex Olympic athlete Caster Semenya and her competition status, a Swiss court had ordered the International Association of Athletics Federations (IAAF) to suspend their rules requiring intersex or biologically male transgender athletes to suppress their testosterone levels if they wanted to compete against women. That was considered a victory for Semenya by many activists, but it troubled many world-class athletes who feared that the unfair advantage would undermine women’s sports.

Now the IAAF has concluded yet another investigation and issued a finding that may wind up ditching the court ruling. This week they declared that Semenya is “biologically male.” (Associated Press)

The governing body of track argued that Caster Semenya is “biologically male” and that is the reason she should reduce her natural testosterone to be allowed to compete in female competitions, according to documents released publicly by sport’s highest court for the first time on Tuesday.

The IAAF’s stance on Semenya and other female athletes affected by its new testosterone regulations was revealed in a 163-page decision from the Switzerland-based Court of Arbitration for Sport, where the South African runner took on the IAAF over its highly contentious hormone rules in a closed-doors five-day hearing in February. CAS released only excerpts of the final decision when it was announced last month.

Tuesday’s fuller court records, which were still partially redacted, show the IAAF referred to the two-time Olympic 800-meter champion as one of a number of “biologically male athletes with female gender identities.”

This was already a troubling and intensely complicated situation and this new finding really doesn’t seem to be helpful in the larger scheme of things. First of all, Semenya is not transgender, as in being a man who decides to “identify” as a woman and compete against actual women in sports. She was listed as a female at birth and has lived her entire life as a girl/woman. But Semenya is intersex, having a complicated XY chromosomal structure and at least some of the physical attributes of a male as well, leading to her heightened testosterone levels. Calling her a male because of something that was no fault of her own seems both offensive and counterproductive. 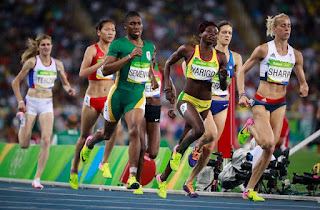 Caster has a rare form of hyperandrism caused by, ironically "androgen insensitivity syndrome", in which the body is not as sensitive to androgens (primarily testosterone)  as a "normal" person.


Androgen insensitivity syndrome is a condition that affects sexual development before birth and during puberty. People with this condition are genetically male, with one X chromosome and one Y chromosome in each cell. Because their bodies are unable to respond to certain male sex hormones (called androgens), they may have mostly female external sex characteristics or signs of both male and female sexual development.

Complete androgen insensitivity syndrome occurs when the body cannot use androgens at all. People with this form of the condition have the external sex characteristics of females, but do not have a uterus and therefore do not menstruate and are unable to conceive a child (infertile). They are typically raised as females and have a female gender identity. Affected individuals have male internal sex organs (testes) that are undescended, which means they are abnormally located in the pelvis or abdomen. Undescended testes have a small chance of becoming cancerous later in life if they are not surgically removed. People with complete androgen insensitivity syndrome also have sparse or absent hair in the pubic area and under the arms.

It's a tough case. "She's" genetically a male, outwardly female, but physically somewhere in between, with greater strength and speed than would be expected in a genetic female. Where should she race? "She" will dominate women's races, and fall way behind the top men's scores. I'm glad I don't have to decide.
Posted by Fritz at 7:22 PM