More Russiagate on a Tuesday Morning

What did President Obama know, and when did he know it? Those questions need to be asked by investigators both inside and outside of Congress. I think Trump’s surmise is correct, not only because the anti-Trump effort rose high up into the bureaucracy, but because Peter Strzok told his lover that “potus wants to know everything we’re doing.”

It sure seems likely. We need to put a few guys and gals in jail to squeeze them to confess, AMI right? At Althouse, Did Trump say that Obama was behind a group of people who were trying to steal the election using the fake dossier? He did, and he's right. As usual, the fun in is the comments. At Breitbart, Fitton: Emails Show Obama State Department’s Role in Anti-Trump Coup Cabal. After being led by Hillary Clinton and John Kerry why would that be surprise? From Lloyd Billingsley at Frontpage Mag, Kerry State Department Promoted Steele Dossier and Russia Collusion Fantasy.

Monica Showalter at Am Think, Dictator in exile, Medici edition: Is Obama secretly meeting with Italy's Renzi to get their stories straight?. Quick, let's find out if the Logan Act still has any teeth.

Jed Babbin, AmSpc reports The CIA Is Running Scared - Barr’s bloodhounds are sniffing up Langley’s skirts. Still questioning Gina Haspel's commitment to the clean up. At RCP,
Victor Davis Hanson claims Likely Criminal Referrals For Brennan, Comey, McCabe Will Be A Slow Process All The Way Through 2020. I didn't imagine he was that optimistic.

Julie Kelly at AmGreat, No Outrage Over Democrat Ties to Foreign Election Interference. I'm outraged, how about you? It's just the bulk of the media that doesn't care and is actively resisting attempts to investigate it. From Adam Mill at Da Fed, Election Commissioner: Clinton Can Get Info From Foreigners, But How Dare Trump Think About It. Ace, Lindsey Graham and Jim Jordan: Psst, Hillary Clinton and the DNC Employed a Foreign Agent to Buy Disinformation From RUSSIANS. From Da Caller, Lindsey Graham: ‘President Trump Is Right. Talking To People Is Not A Crime’. Lindsey 2.0 was a considerable upgrade. David Harsanyi at NYPo insists, Anti-Trump ‘dossier’ was all about foreign interference in a US election. Why, yes it was, wasn't it?

At Fox News, Beto argues Trump's foreign intel comment is grounds for impeachment. Not exactly a source of non-biased political opinion. So what's he polling at now? 3%. No, 2%. From Rabbi Fischer at Am Spec, ‘I Think I Would’ — A Clause Challenging Those Who Incite Before Thinking, but what's the fun of thinking before emoting?

A review by John Fund at NR, FBI Lovebirds Is D.C. Satire at Its Best. At WaPoo, Former Superman and 'FBI Lovebirds’ star Dean Cain explains where he falls politically


Dean Cain is one of the rare Hollywood stars that doesn’t fall into the category of liberal. But don’t call him a conservative either. Yes, he likes and voted for Trump, and vows to vote for him again, but he says that doesn’t make him a “an alt-right crazy" (which he claims he’s been called, in addition to a slew of other names). Which is why he didn’t shy away from participating in the right-leaning play, “FBI Lovebirds: Undercovers” even after someone threatened violence against the cast via Twitter two weeks ago, causing the production to change venues.

“It was a tweet,” play director Phelim McAleer said of the threat. “We get more than that every day.”

The Daily Signal, DC Theater Cancels Strzok-Page Play, ‘FBI Lovebirds: UnderCovers’ You're just not allowed to make fun of some people in that town.


The play was scheduled to open at Mead Theater space in the Studio Theatre complex June 13, but on May 28, the theater sent an email to McAleer and the Unreported Story Society production team revoking their booking.

“Media reports have made us aware of undisclosed details about the event,” an employee of the theater told the team, according to the press release about the film’s cancellation. The employee also cited “security concerns” as a reason for cancelling.

Speaking of Page and Strzok,  The DNC Sold The Brooklyn Bridge To The FBI. But the FBI and DOJ knew what they were getting was shite.

Another review by John Dale Dunn at AmThink, Robert Mueller: A Scary and Mendacious Man. You don't get that high up in the deep state by being warm and fuzzy.


"Mueller has left his imprint on some of the most notorious episodes of government wrongdoing of the last thirty years."  Mr. Milkovich is and was assiduous in his research and provides almost 400 endnotes and more than 125 items of bibliography as reference sources for his 165-page self-published book.  When I asked him about the tough calls, he pointed to the sources and compelling evidence.

A bit like the girl who killed her mother and asked for forgiveness because she was an orphan, British home secretary on Trump: Time to stop 'interfering' in UK politics (Da Hill). 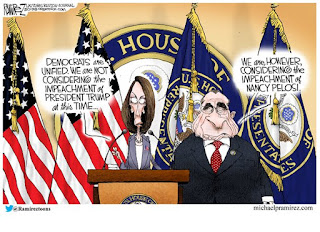 
Question: What can Congress do to get around claims of executive privilege while pursuing dreams of impeachment? Answer, via Politico — subpoena randos. Oh sure, they’re famous randos, of course, necessary for garnering the headlines that the House Judiciary Committee craves, but legally speaking about as relevant as calling John Dean to talk about Watergate.

The subpoenas for Paul Manafort and Rick Gates might have some theoretical connection to an impeachment case against Donald Trump. They worked on his campaign and are facing long years in prison for their earlier corrupt acts in dealing with Ukraine and Russia. Similarly, Michael Flynn worked in the White House — briefly, anyway, after working on the campaign and transition team. It’s theoretically possible that they could produce some sort of smoking gun against Trump.

However, that’s only a theoretical possibility. All three men faced prosecution by Robert Mueller, and none of them produced any smoking guns in exchange for leniency. Flynn, in fact, has been so cooperative that Mueller’s team has had to go to bat for him a couple of times with a federal judge to get a lenient sentence — and yet never gave Mueller anything on Trump. What exactly can the House Judiciary Committee give any of these men to unlock some supposed secret knowledge that they theoretically didn’t cough up to Mueller when it theoretically might have kept them out of prison? Immunity from future prosecutions? That’s a big help, and only in the theoretical sense.

At best, this is the House Judiciary Committee doing some belated due diligence in confirming Mueller’s work. At worst, it’s a publicity stunt by Jerrold Nadler.

As for subpoenaing Corey Lewandowski and Chris Christie, there is no “at best” scenario. It’s pure stuntwork and nothing more. Neither man worked in the White House, so they can’t speak to obstruction. No one has ever hypothesized that either man was in the Russia-collusion-hypothesis loop either. They literally have nothing to add to any impeachment case proposed by Democrats. Democrats will use them as props, targets for their soliloquies about Trump while producing nothing at all of substance.

The other objective, which they've been practicing all along, is to make it clear that if you work for Trump, ever, you will face a mountain of lawyer's fees.

A "Where are they now" From WaT, Justice Department reportedly blocks Paul Manafort transfer to Rikers Island. Good, extrajudicial punishment should not be an option.


Deputy Attorney General Jeffrey Rosen sent a letter to Manhattan prosecutors last week and on Monday informed the Manhattan district attorney’s office that Manafort would not be moved to the notorious prison, according to the Times.

Instead, Manafort could remain at a federal facility own Loretto, Pennsylvania, or the Metropolitan Correctional Center in Manhattan while he awaits trial in New York on state charges, the paper said. The Times also reported Manafort was transferred to the Manhattan facility on Monday, a sign that his arraignment is near.

Justice Department officials told the Times that the intervention was unusual, but not inappropriate. Judges and prosecutors, however, said it was surprising that Mr. Rosen would involve himself in the Manafort case, according to the paper.