Reason #6381 that Trump was Elected

A government report on Friday showed U.S. production grew 2.1% in April to 12.16 million barrels a day. Booming shale production from places like the Permian basin of West Texas have enabled U.S. oil output to overtake Saudi Arabia and Russia. At the same time, trade disputes and escalating tensions in the Persian Gulf have clouded the outlook for the Organization of Petroleum Exporting Countries, which is expected to extend current output cuts next week. 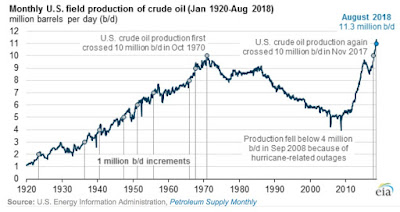 “It really means that OPEC has to make a decision to balance the market or shale will do it for them,” said Jim Lucier, managing director of Washington, D.C.-based Capital Alpha Partners LLC. “Despite all the talk about Wall Street forcing capital discipline, we’re not seeing any diminishing production yet.”

Crude output from the Permian is expected to jump 50% by 2025, according to BloombergNEF. ESAI Energy forecasts crude and condensate from the Bakken, another prolific play, will surpass record output into next year.

This may not be entirely fair; US oil production was rising under Obama too, though largely against the meddling of his administration. Under Trump, the oil industry has continued to flourish. Most of the oil contributing to this comes for "tight" oil, which is to say, oil for which fracking is needed to extract it.


U.S. Accounts For 98% Of All Global Oil Production Growth

But we still have a way to go. US oil usage averages 19 million barrels a day.

Linked by Pirate's Cove in the weekly Sorta Blogless Sunday Pinup and links.
Posted by Fritz at 5:32 PM