Want to Buy Some Disappearing Land?

Our county has a deal for you! County to sell cliff mitigation properties

The Calvert County commissioners directed staff June 11 to make arrangements for the transfer of properties the county had acquired to eliminate long-term risk to people and property from shoreline and cliff erosion in Calvert.

The county acquired and demolished 10 properties, five of which are located in Lusby, four in Port Republic and one in St. Leonard.

The 10 sites will be readied for transfer to a willing party.

“It’s a long time. It’s a long process,” Commissioner Mike Hart (R) said of the nearly eight-year effort.
. . .
During the commissioners’ meeting, county attorney John Norris said upon acquiring the properties, and a cash contribution from the former property owners, the county had the houses, and other improvements such as sheds, decks, fences removed.

Wow, they made you desert the house, and charged you for the privelege, Kind of like the Communist dictators charging you for the bullet they executed your father with.


By June 2014, all work was completed, and the FEMA grant was closed out.

“We’ve since been audited and passed,” Norris said before the commissioners.

However, since that time, the county has carried insurance, but otherwise allowed the properties to return to a natural state.
Transferring ownership of the property will reduce the county’s expenditure on insurance.

Demolition on the properties started in 2013 and continued into 2014, according to Freeland, of the currently board-owned properties.

Norris informed the Recorder in an email that no transactions are set up. He will reach out to homeowners associations and adjoining property owners, where the property is located, to find parties interested in holding a property title.

“We’re exploring interests and, if there are competing parties with interest in the same properties, I’ll seek direction from the board,” Norris explained.

Any interested HOAs or adjoining property owners could acquire a property, but with limited benefit and with the requirement they maintain the property’s appearance, so it does not detract from the values of the neighborhoods.

Restrictions on any future temporary or permanent use or development would apply, as well as a future right of entry would be retained so that FEMA can continue to conduct audits to ensure the properties continuously meet grant stipulations.

Freeland said one of those requirements is that there are “easements placed on the properties that prevent occupied structures from being built.”

Such a deal, a piece of land you can't build anything on, but have to maintain!

One of the properties was in the neighboring community of Calvert Beach, and overlooks the beach we walked every day. In fact, the people who left the house were "allowed" to sell anything and everything they could get cash for. We bought a couple of nice wooden doors to replace some builders level crap we still had. You can see the site here; the house in center left is now gone. 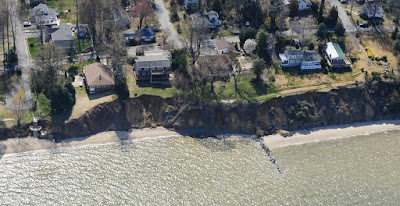 But if you want to buy the lot, the Calvert County will be more than happy to sell it to you, and collect the property taxes.
Posted by Fritz at 8:07 PM