It seems like the faux foreign influence story started by George Stuffinenvelopes is dominating today.  At Da Hill, Trump in testy exchange with Stephanopoulos: 'You're being a little wise guy'. Of course, this was about obstruction. George asked Trump if he was still obstructing justice:

Stephanopoulos was pressing the president on not answering questions in person from special counsel Robert Mueller's team.

"Wait a minute. I did answer questions. I answered them in writing," Trump said

"Not on obstruction," Stephanopoulos replied.

"George, you're being a little wise guy, OK, which is, you know, typical for you," Trump hit back.

At the Daily Wire, Graham: Trump Was Wrong To Say He'd Take Intel From Foreign Agent, And Hillary Was Wrong To Actually Do It. Actually, as Chief Executive, Trump is the head of the intel agencies, and it's his prerogative to judge and pass on any intelligence to his underlings.

Thomas Lifson at AmThink, Trump successfully baits his foes with comments to Stephanopoulos on foreign information on opponents. It does give him another excuse to pound on Hillary. Also at AmThink, Patricia McCarthy points out how The Left's hypocrisy knows no bounds. But we already knew that.

CNS News, Liberal Fury, After Trump Says He Might Take Info on His Opponent From 'Foreigners'. So we're all agreed then, that having illegal aliens volunteer for American campaigns is a deportable crime, and a campaign finance violation? Good to know. Joe Biden: I’m Pledging Right Now Not To Use Disinformation Or Accept Foreign Government Help In The Campaign. We need a few sting operations to verify this.

Throwing out red meat to her commentariat Althouse cited John Hinderacker at Power Line, "As Trump told Stephanopoulos, there is nothing wrong with listening to information that anyone, foreign or domestic, might have that is relevant to a presidential candidate."


"But what is blindingly obvious, yet absent from every Democratic Party news account feigning horror at the ABC interview, is that the Hillary Clinton campaign didn’t just receive 'foreign dirt' on the Trump campaign. It paid for foreign sources to fabricate lies about Trump, which it then disseminated to the press. Listen to 'foreign dirt'? The Clinton [campaign] paid for it!"

But, according to disgraced FBI guy, Andy McCabe, buying it is perfectly OK. By way of the Wombat's In The Mailbox: 06.14.19, the Weasel Zippers pointing to  FEC Chair as she Takes Shot At Trump About Soliciting Foreign Info, Why Hasn’t She Gone After Hillary/DNC? Maybe This Explains It…


So why hasn’t she gone after Hillary Clinton and the Democrats for what they did?

Turns out Ellen Weintraub, in addition to being a Democrat, also worked for Perkins Coie in the past, the very firm the DNC/Hillary hired to use Fusion GPS and Christopher Steele to get the Russian info.

Getting back to "Spygate", Julie Kelly at AmGreat floats an interesting theory Was Sergey Kislyak Part of the Russian Collusion Hoax?


If the Trump-Russia election collusion hoax was a movie, Russian Ambassador Sergey Kislyak would have a starring role.

From Attorney General Jeff Sessions’ fateful recusal to National Security Advisor Michael Flynn’s resignation to the aftermath of FBI Director James Comey’s firing, the former Russian diplomat made more than just a few consequential appearances. The question is, were these incidental cameos or was Kislyak following a script written for him by the collusion fraudsters?

Given that the real goal of the Russians was to encourage disunity, it's not beyond the realm of possibility. Ace picks up the thread in  Julie Kelly: Was Russian Ambassodor Kislyak Part of the Russia Disinformation Op?


Kelly lays out a full case of suspicious contacts with Obama and Hillary folks, as well as his strange, random cameos at large events where he could say hello to a Trump supporter for three seconds (as he did with Sessions) and thus engineer a scandal. It's worth a read.

Meanwhile, Kelly is annoyed at people who have pushed this conspiracy theory for two years and are now pretending to have always debunked it. . . .

Leo Goldstein at AmThink writes about The External Roots of Spygate


Not Trump, but the Democratic party and Hillary Clinton personally were the perfect fit for Putin. Hillary Clinton started her tenure as Secretary of State by implementing a “reset” with Russia in 2009. During 2012, Russia joined the World Trade Organization, and the West bought from it hot air (carbon credits). Later that year, Obama was caught on mic promising Medvedev that he would become even more accommodating towards Russia after the election. Hillary Clinton and Barack Obama sold Uranium One to Russia, organized the transfer of dual-use technology in Skolkovo, and allied themselves with Russian-funded groups against fracking and pipelines in the U.S.  Allegations that Putin had a personal grudge against Hillary, and kept it for five years, are just laughable.

Trump conducted a Miss Universe pageant in Russia in 2013, and that was all. As a presidential candidate, he promised a U.S. military buildup, and he said the U.S. should shoot down Russian interceptors that were reportedly harassing U.S. military planes in international airspace, after appropriate diplomatic steps.

The ideation of a Putin-Trump association and of Russian interference on Trump’s behalf came from Western Europe. People of Germany, Britain, and other EU states were dissatisfied with policies robbing them of their sovereignty.  European politicians wanted to crush dissent, and Russia and Putin became a convenient boogeyman. The government of Angela Merkel blamed Russia for public protests.
. . .
The Eurocrats confused the invented threat of “Russian influence campaigns” with the real prospect that Trump would not be their ally against their own people -- unlike Obama or Hillary. In their imagination, the Trump-Putin nexus was natural. 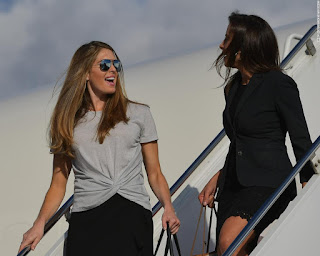 Hope Hicks offers hope to the deranged. From the Victory Girls, Jennifer Rubin Says Hope Hicks Testimony Will ‘Crack Trump’s Wall’ Like Wiley Coyote, she's sure they have him this time! Wait for the anvil . . .

If you must read the original, here's the 30 day pass again.