Chesapeake Bay Has the Blues 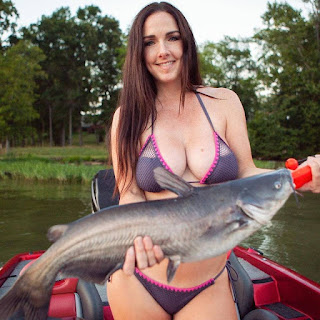 
Last year’s record-setting rainfall brought more into the Chesapeake Bay than pollution and debris. Biologists say the freshwater deluge helped the nonnative blue catfish, which was already invading the estuary, to spread farther in the region’s rivers.

“The gate is open,” said Martin Gary, executive director of the Potomac River Fisheries Commission. “They have left and dispersed everywhere.”

Blue catfish, which can grow to lengths of 5 feet, were released into Virginia’s Bay tributaries in the 1970s as part of an effort to build a sport fishery. 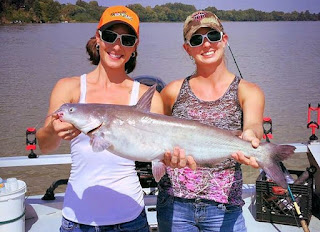 Since then, they have reached numbers beyond what anyone imagined in rivers from the James to the Potomac, and they had begun spreading to other places in recent years. Biologists and state fishery managers had hoped to stem further expansion, fearing harm to native species such as blue crabs, yellow perch and white catfish.

Those hopes were washed away with 2018’s persistent rain. Blue catfish prefer fresh or slightly salty water, which somewhat constrains their movement into lower reaches of tidal rivers and the Bay itself. The heavy rain dramatically reduced salinities in rivers and most of the Bay, allowing the catfish to spread almost everywhere. 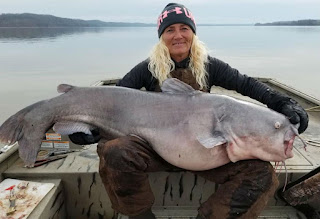 On the Potomac, blue catfish are generally found north of the Route 301 bridge. But last year, they spread throughout the lower river and beyond. A Baywide fish survey, which had never before found catfish in the mainstem of the Chesapeake, caught dozens off the mouth of the Potomac last fall.

Virginia biologists were surprised when the fish turned up in small creeks on the lower Eastern Shore — an area they thought might be safe from the invaders because of its normally high salinity.

“With all of the rain we’ve had, we are starting to see reports of blue catfish in a lot of areas that have never seen them before,” said Patrick Geer, deputy chief of the fishery management division of the Virginia Marine Resources Commission.

With the door open to new habitats, biologists say that blue catfish numbers will likely grow for the foreseeable future and are uncertain that much can be done about it. Virginia is poised to allow electrofishing by commercial harvesters to ramp up removals. But “whether or not we can curb the population, I don’t know for sure,” Geer said.

Most agree on one thing. Blue catfish are here to stay. What that means for the Bay, no one knows. 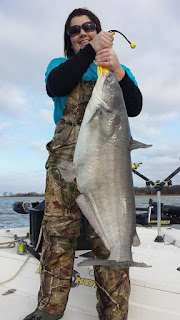 One thing we do know, they will get caught, by both recreational and commercial fishermen: As blue catfish multiply in Chesapeake Bay, watermen pursue new catch — and restaurants offer new delicacy


Rocky Rice heads out on the Potomac River as soon as it’s light enough to see.
Mostly, it’s not blue crabs he’s after, but blue catfish. With white bellies and long whiskers, the invasive blue cats have been appearing in recent years in rivers and creeks up and down the Chesapeake Bay. They voraciously eat fish, crabs and clams — whatever they can find, biologists say — and can grow into rounded 100-pound blobs of grayish-blue scales.

“They are in every stem of the bay, pretty much,” Rice said. “Will they completely take over the ecosystem in 50 years? I have no idea.”

Neither do scientists. Blue catfish, which were first introduced by Virginia officials to the James River for sport fishing, might number more than 100 million in the Chesapeake Bay now, researchers say. 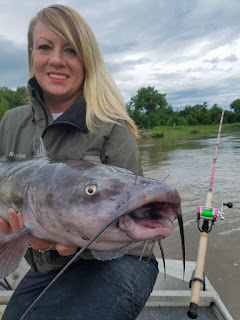 Amid heightened concern that blue catfish already could be spreading out of control, watermen, conservationists and government officials are attempting to stanch their population by catching as many of those invaders as they can and encouraging people to eat their firm, clean-flavored flesh. Blue cats now appear on plates everywhere from Baltimore’s ballpark and high-end restaurants to state-run prisons, creating a growing new market for the bay’s watermen.

Though conservation rules limit the catch of the Chesapeake’s most prized catches, such as rockfish, oysters or blue crabs, watermen can and do catch massive bounties of blue catfish, so much so that the species native to the Mississippi River and Gulf of Mexico is becoming the primary harvest for some like Rice and Pete Springer.

Springer, who also fishes in the Potomac, said he never saw catfish while growing up in Southern Maryland, but in recent years has turned more and more to netting them for his living. Commercial watermen in Maryland and Virginia harvested more than 5 million pounds of them in 2017 — almost twice as much as the states’ combined striped bass commercial harvest. 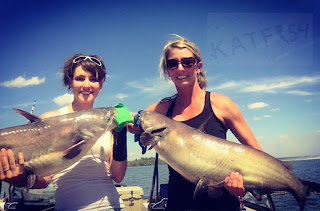 “It has taken over this river,” Springer said of the blue catfish.

Scientists say they don’t have enough information to predict whether and how the catfish might be throwing bay ecosystems out of whack. They are only just starting to research where the bay’s new catfish go to keep warm in the winter and to spawn in the spring, how much saltwater they can tolerate, and just how much their population has grown in the Chesapeake. They think recent wet years encouraged the freshwater species’ spread but don’t know whether that has helped their reproduction.