A rather small and scattered set this morning. Is the scandal loosing steam? From WaEx's Byron York, Three reasons Trump-Russia hasn't turned into Watergate

1.) The facts are different. In Watergate, the underlying crime was a break-in at Democratic National Committee headquarters, perpetrated by burglars paid by President Richard Nixon's reelection campaign. The scandal proceeded from there. In Trump-Russia, the underlying crime was the hacking of the DNC's and John Podesta's emails — a crime committed by Russians in Russia. Special counsel Robert Mueller, who indicted a number of Russians and Russian entities for their actions, spent two years trying to find conspiracy or coordination between the Russians and the Trump campaign. He failed. . . .

2.) The press is different. Just as the facts of Trump-Russia are quite unlike Watergate, so the media environment of 2019 is quite unlike what existed in 1974. Back then, there were three 30-minute broadcast network newscasts, CBS, NBC, and ABC. There were two big newspapers, the New York Times and the Washington Post, and TV network executives sat down each day, within a few blocks of each other in Manhattan, to produce newscasts that basically illustrated the papers' latest stories. There was no Internet, no cable news, no podcasts, no social media, and no talk radio. Nixon, even if he had had strong defenses, faced a solid wall of media opposition. . . .

3.) Congress is different. Differences in the facts of the cases and differences in the media's ability to report those facts have had a profound effect on lawmakers. They're better informed, if they want to be, and can make a better defense of the president of their party. And having a significant number of constituents supporting the president makes representatives more likely to support him, too. (Also unlike today, in 1974, opposition party Democrats controlled all of Congress, with 243 seats in the House and 56 in the Senate.). . .


"To this point, the Department has assessed culpability to 15 individuals, some of whom were culpable in multiple security incidents," Mary Elizabeth Taylor, the State Department's Assistant Secretary in the Bureau of Legislative Affairs, wrote to Grassley. "DS has issued 23 violations and 7 infractions incidents. ... This number will likely change as the review progresses."


The document release revealed numerous episodes in which the Clinton team either suspected it had been hacked or seemingly acknowledged that security measures had come up short.
"omg," top Clinton aide Huma Abedin wrote to Justin Cooper, the technology pro overseeing Clinton's private home-based email servers, when he told her shortly after midnight on Jan. 9, 2011, that "someone was trying to hack us."

Ace, State Department Details 23 Security Violations and Possible Hacking Incidents in Hillary Clinton's Illegal Server System Now they tell us. "All I see here is a big pile of lack of intent."


And in March, it was revealed that the Justice Department "negotiated" an agreement with Clinton's legal team that ensured the FBI did not have access to emails on her private servers relating to the Clinton Foundation. Former FBI Agent Peter Strzok testified about the arrangement during a closed-door appearance before the House Judiciary Committee last summer, according to a transcript released this year.
"A significant filter team" was employed at the FBI, Strzok said, to "work through the various terms of the various consent agreements." Limitations imposed on agents' searches included date ranges and names of domains and people, Strzok said, among other categories.
...
Former Utah Rep. Jason Chaffetz, who chaired the House Oversight and Government Reform Committee until 2017 and is now a Fox News contributor, said the arrangement signaled that agents wanted willful blindness.

Via Wombat's In The Mailbox: 06.18.19, Don Surber, Hillary's henchmen investigated


"Some of the 15 people got write-ups placed in their security files at the department, according to a letter sent to Sen. Chuck Grassley, Iowa Republican. Those could affect future attempts to gain security clearances, the department said."

They needn't worry, the Deep State protects it's own

Nicholas Balasy at PJ, At 2020 Campaign Kickoff, Trump Says He'd Get the 'Electric Chair' if He Deleted Emails Like Hillary Clinton (Video). A little hyperbole never hurt. Maybe they'd just put him in a concentration camp.


Trump said that Clinton and her aides got "a free pass" while he was scrutinized during the Russia probe, which he argued is evidence of a "rigged system."


And still, from Lawrence Person's BattleSwarm Blog, Still No Hard Evidence Russia Hacked The DNC. I'm sure they did though, along with half the other intelligence services in the world. At Gateway, House GOP Leadership: FBI Director Wray Not Cooperating with AG Barr’s Spygate Investigation – Burying Documents. Draining the swamp is hard.

At the Beltway, Time To Panic: ‘Special Prosecutor’ John Durham is Now Circling the Target – Ex-CIA Chief John Brennan, and a Zero Hedge, McGovern: DoJ Bloodhounds On the Scent Of John Brennan. I hope so, but I don't want to get my hopes too high; it's rare that the Deep Staters get called on the carpet.

The Epoch Times reiterates, Trump Says Obama ‘Must Have Known’ About Spying on His Campaign


Messages between two top intelligence employees who were having an affair—Lisa Page, former FBI deputy director Andrew McCabe’s assistant, and Peter Strzok, a special agent who worked on the investigation into Hillary Clinton’s improper use of personal emails in addition to the probe into the Trump campaign’s alleged collusion with Russia—indicated that Obama was receiving briefings about the investigation into Trump’s alleged links with Russia.

On Aug. 5, 2016, Strzok wrote to Page: “Went well, best we could have expected. Other than [redacted] quote, ‘the White House is running this.'”

References to giving briefings and being at the White House were littered throughout Page and Strzok’s correspondence, which was later obtained by investigators and released to the public with redactions.

I'll bet Obama will claim he heard it on the news. Which would be pretty funny, because it would almost have to be Fox, given the way the other networks downplayed it. 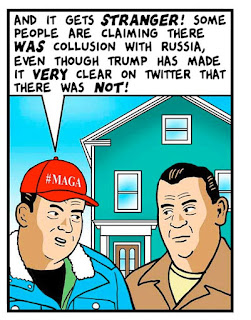 Don Surber, What the DC echo chamber is saying


On December 18, 2018, cartoonist Dan Perkins under his Tom Tomorrow pseudonym mocked supporters of President Donald John Trump for living in an echo chamber.

This backfired because it is Perkins who is isolated from reality.

My favorite panel was the one where the supporter said, "And it gets stranger! Some people are claiming there was collusion with Russia, even though Trump has made it very clear on Twitter that there was not!"

Who is the bumpkin now?

From the last holdouts of Never-Trumper at the Bulwark How to Impeach Donald Trump "The Republican Senate won't do it. The Democratic House won't do it. But there is a way, if Nancy Pelosi wants to do it."


The alternative is to run a stealthy, undeclared impeachment process. Call it an investigation, call it oversight, call it anything you want—but don’t call it impeachment. In fact, make a big show of being against impeachment because it would be so divisive, and such an obstacle to the House doing its real job of work for the American people. And while you’re doing that, call witnesses, force Trump to stonewall, and win one court battle after another.

Then wait until the presidential campaign is in full swing—when it’s too late to get to an impeachment vote—and announce that the president has left you no choice but to start a formal impeachment inquiry: We might not be able to remove, or even impeach him, but we owe a duty to the Constitution and to future generations not to turn a blind eye to his misconduct.

Right up to the election.