The discussion of the likely outcome of Special Counsel Robert Mueller's coming testimony to the House Judiciary and Intelligence Committees continues to dominate the discussion. On Da Hill, Battle lines drawn for Mueller testimony


Both parties are already drawing their battle lines and laying the groundwork for the contentious hearings.

Democrats are furious at what they say was an effort by Attorney General William Barr to misrepresent Mueller’s findings, and they see the hearing as an opportunity to set the record straight and highlight details from a report that most voters have not read.
. . .
Republicans, who have generally not been opposed to Mueller testifying, assert that the Russia report vindicates the president of allegations of “collusion” with Moscow. And they argue that Democrats are attempting to relitigate Mueller’s investigation in order to score political points against the president heading into 2020. 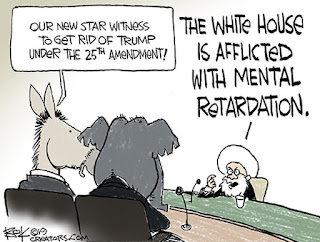 David Catron at AmSpec. Robert Mueller: The Guest Who Won’t Leave I think he'd like to sneak away.

Everyone has met Robert Mueller. He’s the guest who won’t leave the party. You first notice him as an awkward presence gradually eroding the pleasant ambience by hovering silently at the edge of the festivities. Then, after he has had a couple of drinks, he begins to insert himself into random conversations with solipsistic non sequiturs. At length, after everyone else has contrived to leave early, you discover that he’s too drunk to drive even if he could find his keys. You call a cab, but he misses it and you find him asleep in your front yard the next day. This is what it’s like to get rid of someone like Mueller.
. . .
Robert Mueller is the Beltway counterpart of the guest who won’t leave. And, like that feckless character, he has nothing to offer those who invited him to the soirée yet doesn’t have enough sense to know it. In the Nadler and Schiff hearings, he will bore everyone with self-aggrandizing sermons that will irritate his hosts, frustrate their guests in the press gallery, and bore the public. If the Dems know what they’re doing, they will give Mueller the bum’s rush before the voters quietly slip out of their obviously dead party.

Rushbo, Clueless Mueller Has to Figure Out What’s in His Report. Some truth in just the title. It seems pretty certain that Mueller was just the figurehead, with Andrew Weissman's hand on the wheel as the Pequod sought the great white orange whale. He'll be asked a lot of detail, and unless he bones up on it, there's no way he can sound authoritative.


That’s one of the reasons he doesn’t want to testify, never has wanted to testify. ‘Cause he didn’t really do the work. Look, that’s understandable. When you have seasoned citizens who’ve spent their lives building a career and establishing a reputation and built businesses, their names go at the top of the masthead and it’s the underlings, the young people, people filled with energy that come in and do the work.

I’m not even being critical of Mueller. This is just the way these things work. You’d be amazed, I think, at the number of people who get credit for doing a lot of work who never do any. They have underlings do it all. I have resisted that. I’ve had the opportunity to pass off everything to a bunch of staff, but I’ve not done it. You know why? ‘Cause it’s the fastest way to not knowing anything. It’s the fastest way to have to end up faking it all.

A warning from  Rep. Meadows: 'Bob Mueller Better Be Prepared' for Republican Cross-Examination (CNS News), and a fine and growing list of questions for him to answer at  Do You Miss Harold Finch? Here’re some comments from him.

From Sundance at CTH, Dershowitz: “Democrats Will Regret Calling Mueller to Testify”…


Mueller in that last brief press conference seemed as nervous as a guilty man on trial for lying. He has done a lot of lying in his long career; he likes to win at any cost. He destroys people for sport. Is he going to be more confident in front of those two committees? Probably not. He most likely turned the entire "investigation," the corrosive attempt to frame Trump, over to the criminally corrupt Andrew Weissmann. That is who should be called before Congress. Weissmann is a blight on our judicial system but has never been disbarred or charged with the numerous crimes he has committed. He is often referred to as Mueller's "pit bull" and is a rabid dog if there ever was one. See License to Lie by Sydney Powell.


House intel chair Adam Schiff says what he's really trying to do is explain "to the American people the serious counterintelligence concerns raised by the Mueller report." He must assume we're ignoramuses — or is that projection?

Okay, I'm picking on someone for whom a lobotomy would be irrelevant, but he has lied to the American public consistently for over two years and deserves to be punished and humiliated. He undoubtedly knows this, because, as a member of the House Intelligence Committee, he was supposedly privy to the truth all that time. (The number of Democrat politicians who deliberately lied to the public about Russia is extraordinarily long. Hello, Senator Warner... Someone should make a YouTube of their lies when this is over, but the organization would undoubtedly ban it.)

Dan Sobiesky is still hung up on Dossier 2.0 – Mueller’s Fake Black Cash Ledger Used To Persecute Manafort "Perhaps we need a special counsel to investigate the special counsel. As for Robert Mueller, follow the black cash and lock him up."

Another issue that has re-reared it's ugly head is Samantha Power's insane use of the "unmasking"; revealing the names of US persons in NSA intercepts. John Solomon on Da Hill, 'Unmasker in Chief' Samantha Power spewed anti-Trump bias in government emails


It turns out that Power — the diplomat whose authority inexplicably was used to unmask hundreds of Americans’ names in secret intelligence reports during the 2016 election — engaged in similar Trump-bashing on her official government email, according to documents unearthed by an American Center for Law and Justice lawsuit. The conservative legal group is run by Trump defense attorney Jay Sekulow.

The discovery could add a new dimension — a question of political bias — to a long-running congressional investigation into why Power's authority was used to unmask hundreds of Americans' names in secret National Security Agency intercepts during the 2016 election. That practice of unmasking continues to grow today.

Power’s barbs toward Trump started as early as the GOP primaries, when she used her email to connect Oskar Eustis, the artistic director at the Public Theater in New York, with oft-quoted think tank scholar Norman Ornstein, the memos show.

“Oskar, Norm will explain our political system, in a way that will fleetingly make it seem rational, though maybe not after Trump and Sanders win NH,” she wrote, predicting the future president and upstart socialist Sen. Bernie Sanders (I-Vt.) would win the esteemed New Hampshire primary.

After Trump stunned the world with his general election win over Hillary Clinton, the observations of Power and those emailing her on her official government account turned more vitriolic. . .


So of course she should have unchecked power to "unmask" the anonymized Trump officials the Obama Administration was spying on!

PS: Somehow -- we don't know how, mind you -- those unmasked, de-anonymized surveillance records got leaked to the leftwing press.

I'm not big on enforcement of the Hatch Act at top levels in government; politicians gotta politic. But that last point is important. Some of the surveillance records that Sam signed off on unmasking (I leave the question of whether she actually did or not open), were then leaked to friendly press. That's a felony.

Big League Politics, Comey Hid ‘CLINTON EMAILS’ Binder In His Office Safe and Had Hillary’s Backup Email Device. It's touching that he provided such personal service to the queen to be.


Former FBI director James Comey had a white binder marked “Clinton Emails” in his office on May 16, 2017, a few days after he was fired, as the Department of Justice was trying to get back the items in Comey’s office safe.

Bekesha said it is possible that the State Department has not searched the device, which they received from Comey’s FBI, noting, “They have not yet identified the location of all the records that they reviewed and produced.”

Comey got busted by the DOJ for hiding his “Clinton Emails” binder after he got fired from the FBI, as Big League Politics exclusively reported.