Really Not Much Russiagate

A very slow Sunday morning. The weather here near D,C. is nice; maybe everybody is playing outside. Well, let's see what we got. From John Solomon on Da Hill, Aren't delirious Democrats now accusing Team Obama of treason? 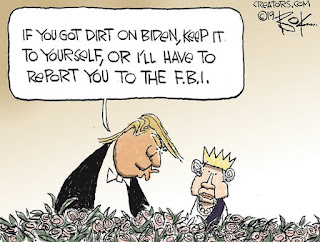 If you read the newspapers, tuned into the cable TV pundits or received an email from one of the Democrats running for president, you’d swear Donald Trump was back to his treasonous ways.

All that was missing was an annoying OMG text exclamation punctuating the unfounded claims that Trump might violate the law in 2020 by accepting intelligence on a political rival from a foreign country. The inference, of course, is that it would come from a hostile power such as Russia or North Korea or Iran.

Actually, what Trump told ABC News’s George Stephanopoulos was that he’d consider taking intelligence dirt about a rival from a friendly ally. (Norway was the actual example he used.)

Sound familiar? That is EXACTLY what the Obama administration did in 2016. It’s something no one in the media or the political space grasped during the tsunami of breathless reaction that followed the interview.

In July 2016, the Obama administration accepted unsolicited information from Alexander Downer, an Australian diplomat who just happened to have helped arrange a $25 million government donation to the Clinton Foundation years before. Downer said that he had witnessed a Trump campaign aide, George Papadopoulos, bragging about some dirt that the Russians supposedly had on Democratic candidate Hillary Clinton. . . .

From the Canuck Freepers, Just Try Calling the FBI With Foreign Dirt Dug Up On Democrats


“I meet and talk to ‘foreign governments’ every day,” the president tweeted Thursday.

“Citing recent conversations with leaders in the United Kingdom and Ireland, France and Poland, Trump said, “We talked about ‘Everything!’ Should I immediately call the FBI about these calls and meetings? How ridiculous! I would never be trusted again.” 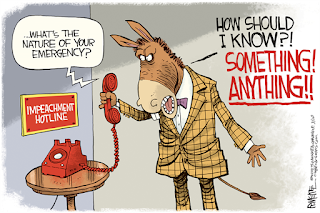 According to Rushbo, The Deep State Positions Itself to Police All Republican Campaigns


Yeah, so, you see what they’re setting up here. You are Donald Trump, or in the future you are a Republican presidential candidate, and somebody on the Democrat side decides to arrange a phone call to you from somebody from Norway, the Dominican Republic. You’ve got somebody calling you from a foreign country offering you dirt on someone. You are supposed to immediately call somebody like Peter Strzok. You’re supposed to call somebody like Andrew McCabe or James Comey, and you are to report it.

When did this start?

When did this start that the FBI is the arbiter of permissible and impermissible campaign material? When did this start? I tell you when it started. It started right now. It is started by the media and by the Democrat Party, and it started in the attempt to overturn the election results of 2016. So now we have two things going forward that the Democrats and the media hope to make SOP, standard operating procedure, for when the Republicans… Actually, three things. When a Republican is elected president, it’s automatically illegitimate. 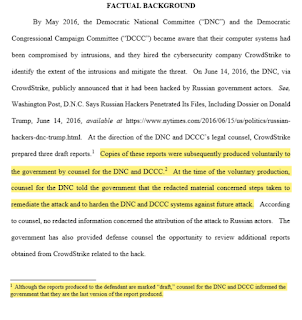 
Suspecting they could prove the Russian hacking claim was false, lawyers representing Roger Stone requested the full Crowdstrike report on the DNC hack.  When the DOJ responded to the Stone motion they made a rather significant admission.  Not only did the FBI not review the DNC server, the FBI/DOJ never even saw the Crowdstrike report.

Yes, that is correct.  The FBI and DOJ were only allowed to see a “draft” report prepared by Crowdstrike, and that report was redacted… and that redacted draft is the “last version of the report produced”; meaning, there are no unredacted & final versions.

This means the FBI and DOJ, and all of the downstream claims by the intelligence apparatus; including the December 2016 Joint Analysis Report and January 2017 Intelligence Community Assessment, all the way to the Weissmann/Mueller report and the continued claims therein; were based on the official intelligence agencies of the U.S. government and the U.S. Department of Justice taking the word of a hired contractor for the Democrat party….. despite their inability to examine the server and/or actually see an unredacted technical forensic report from the investigating contractor.
. . .
The full intelligence apparatus of the United States government is relying on a report they have never even been allowed to see or confirm; that was created by a paid contractor for a political victim that would not allow the FBI to investigate their claim. 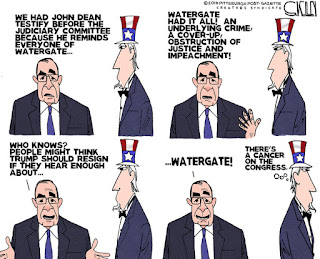 More evidence the criminal referral against Andrew McCabe went no-where, and the grand jury was dropped. How quickly everyone forgets the letter from Meadows/Jordan. The DOJ/FBI complex are remarkably resistant to self discipline.


Look, it's really simple and not complex. Andrew McCabe threatened Rosenstein and the "DC/DOJ system" to out Robert Mueller as part of the FBI operation against Trump.

The Right Scoop, Andrew McCabe justifies what Clinton/DNC did to Trump in 2016 as perfectly fine, also his wife taking $600k campaign contribution from a Clinton henchman, then overseeing the Clinton investigation? No problem!

And at Breitbart, McCabe Confirms Some FBI Employees ‘Frustrated’ No Charges Brought Against Hillary Clinton, which is no surprise, but needs to be highlighted in view of the charges against Sarah Huckabee Sanders that she was lying about it.
Posted by Fritz at 8:57 AM