The blue crab winter dredge survey found, and watermen confirm, that it’s a good year for crabs in the Chesapeake Bay. Now, Virginia and Maryland fisheries managers are responding by easing up commercial catch limits a bit.

On Tuesday, the Virginia Marine Resources Commission (VMRC) approved a slight increase to bushel limits in November, at the end of crab season. VMRC proposed the change in order to “conserve the blue crab resource, while taking into account variations in abundance of this resource.” 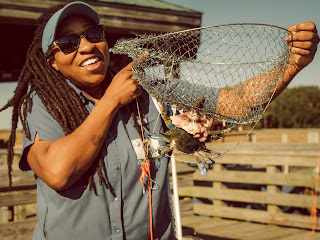 “These modest changes will allow Virginia’s watermen to harvest more blue crabs and are entirely appropriate given strong crab numbers found in the recent winter dredge survey.
Maryland also made slight changes to its catch limits for this season, focusing specifically on mature female hard crabs. In a public notice posted May 30, the Maryland Department of Natural Resources (DNR) announced slightly-higher bushel limits for all months of the 2019 season, which runs through November 30.


The Potomac River Fisheries Commission (PRFC), responsible for managing the Potomac River from Washington, DC to the Chesapeake Bay, on the other hand, is keeping things “status quo” from last year. PRFC tells Bay Bulletin its Crab Advisory Committee didn’t recommend any changes to the crab catch, and the commission decided at its June 7 meeting to follow that recommendation.

I don't have much problem with this. Crab populations are notoriously variable.  But I wish they were as quick to restrict fishing when the populations goes down as they are to loosen them when things are looking up.
Posted by Fritz at 5:51 PM