I'm Sure Mark Is Quaking in his Loafers 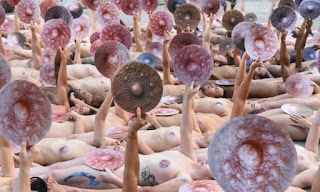 
Despite Facebook's policies that make certain allowances for nudity on the social network, some artists say the rules prevent them from sharing their work online.

On Sunday, artist and photographer Spencer Tunick created a nude installation outside of Facebook and Instagram's New York office with help from the National Coalition Against Censorship (NCAC). Dozens shed their clothes, lay in the street and used images of male nipples -- which are acceptable on Facebook -- to cover people's nipples and genitalia. 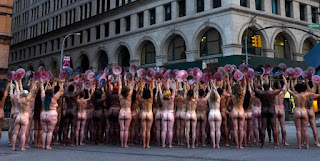 Kind of amusing. But are we sure they didn't sneak a female nipple in there surreptitiously?

"The nudity ban is punishing for photographers and particularly harms artists whose work focuses on their own bodies, including queer and gender nonconforming artists. It also affects museums and galleries that have difficulty promoting photography exhibitions featuring nudes," Christopher Finan, NCAC's executive director, said Sunday in an open letter to Facebook. 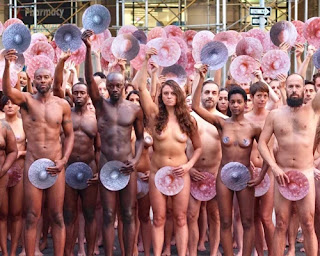 
The NCAC's campaign, #WeTheNipple, calls for Facebook and Facebook-owned Instagram to make an exception to their nudity restrictions to allow for art photography. The campaign has support from more than 20 US and international organizations, museums and art institutions, as well as hundreds of artists.

Finan suggests creating the ability for users to set filters and blocks, instead of having Facebook decide for everyone. Tunick said Facebook and Instagram should communicate more with artists. Similarly to Finan's idea, Tunick said there could be a verification process to protect artists from censorship.

So we'll have Facebook deciding who is a legitimate artist or not? That's a bad idea.

I look forward to the federal governments investigation of the monopolistic policies of Facebook and similar internet giants.

Wombat-socho has Rule 5 Sunday: Monica Bellucci up and on time.
Posted by Fritz at 5:22 PM