Yesterday's late breaking bombshell has to be, as CNN breathlessly reports, Mueller expressed misgivings to Barr about 4-page letter, citing unnamed DOJ officials. Of course, what they decline to tell you is that his misgivings were not about the content of the letter, but rather how the press (say for example CNN) was reporting it. From Ace, in Open Thread, With Various Portents and Tidings

We've read the Mueller report. We know what it says. It obliterates the conspiracy theories. And Mueller said Barr's letter *wasn't misleading*, just that media coverage overread it. But this is the 3-year-history of this story: one-day media hysteria on Twitter that goes nowhere https://t.co/chFGVuLzA9
— Glenn Greenwald (@ggreenwald) April 30, 2019

WaPoo, Mueller complained that Barr’s letter did not capture ‘context’ of Trump probe


The letter made a key request: that Barr release the 448-page report’s introductions and executive summaries, and it made initial suggested redactions for doing so, according to Justice Department officials.

Which of course, has been done now, which hasn't mollified the press at all.

Mueller: you know, media is misrepresenting this report.

Twitchy's post is a classic. Of course, this was all timed by Democrats on the Mueller team and the Media (but I stutter) to five Congressional Democrats ammunition for Barr to face Dem grilling in first Senate hearing since Mueller report release (CNN), which should provide plenty of fodder for tomorrows post. WaPoo's Fix, William Barr has a whole lot of explaining to do. Power Up: William Barr and Robert Mueller's breakup is messy and public, ‘I don’t know’: Barr’s professed ignorance prompts calls for his resignation after Mueller letter 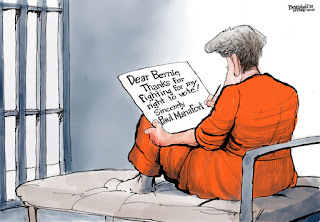 The Epoch Times, The Mueller Report: $25 Million to Disprove Steele Dossier. Expensive, but necessary. Beside's, he made it back on what they confiscated from Manafort alone.


Barr offered access to a less-redacted version of the report to just 12 members of Congress — six Democrats and six Republicans. But as of Tuesday afternoon, only Rep. Doug Collins, the top Republican on the House Judiciary Committee, and Sen. Lindsey Graham, chairman of the Senate Judiciary Committee, opted to view it. A third, Senate Majority Leader Mitch McConnell said he planned to review the report later Tuesday.

Collins and Graham told POLITICO that what’s underneath the redactions has no bearing on Mueller's conclusions: that there wasn’t enough evidence to charge any American with conspiring with Russians to influence the 2016 presidential election and that Justice Department guidelines prevented Mueller from reaching a legal conclusion on whether President Donald Trump obstructed Justice.

“It didn’t change anything,” Collins said. “Some of the redactions could actually be implied from other parts of the report that were not redacted.”

Graham, whose committee will hear from Barr on Wednesday, said he wasn’t clear why some of the information was redacted at all. Like Collins, Graham said that after viewing it, “nothing changed for me.”

Clearly Democrats don't really want to know what's under the redactions. My guess is the Weissman or someone else on the team already slipped them a fully unredacted copy under the table, and it doesn't help them. 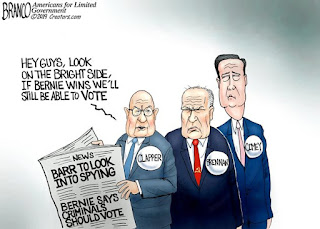 Four from the Wombat's In The Mailbox: 04.30.19, American Greatness: The Real “Bombshells” Are About To Hit Their Targets, Don Surber: Rosenstein Resigns, Fake News Continues, Joe For America: Rosenstein Throws Obama & Comey Under The Bus As He Resigns, and The Geller Report: Former CIA Officer Alleges Brennan About To Be Indicted. I hope it's true, but I doubt it.

Sundance at CTH, Former Obama Advisor Ben Rhodes: We Didn’t Know Anything…., but we need a $25 million, three year investigation to check, and a dozen or so Obama officials prosecuted for process crimes anyway. Possibly related? WSJ, NSA Reports 75% Increase in Unmasking U.S. Identities Under Foreign Surveillance Law in 2018. I hope they enjoy their turn in the barrel. Am Spec, Listen to Joe diGenova, And in the case of the Obama anti-Trump brigade, be very afraid.

Am Spec, The Russian Collusion Hypocrisy of Northeast Democrats


The Mueller report is in, and one thing couldn’t be clearer: Mueller’s team, despite its best (or worst) efforts, found no evidence Donald Trump or anyone on his campaign team colluded with Russia to undermine the 2016 U.S. election.

Despite Mueller’s clear conclusion on this point, Sen. Elizabeth Warren (D-MA) — who, not coincidentally, is running to be her party’s presidential nominee — and Rep. Jerry Nadler (D-NY) continue to lead an inane crusade to nail Trump for imagined crimes.
However, if Warren and Nadler are truly worried about efforts to further Russian interests at the expense of the United States, they should look closer to home for active co-conspirators. For example, Democratic politicians from their home states of Massachusetts and New York, although likely not colluding with Russia, are directly promoting policies that further Russian President Vladimir Putin’s interests — and all at the expense of the United States.

Massachusetts and New York have declared war on domestic production and transportation of fossil fuels. Many Democrats in those states have made it clear they would rather import fuel sources from Mother Russia than from the United States.

Lawmakers in Massachusetts and New York have blocked construction of critical pipelines to carry U.S. natural gas to and through their states. New York has even banned fracking to produce domestic natural gas.

These policies have prevented the creation of thousands of jobs related to construction and oil and gas production in their states, increased energy costs for their residents, reduced local and state revenues, and increased air pollution — benefiting, directly or indirectly, Russia’s government.

For several years, the Russian government has worked to disrupt U.S. energy markets through social media, according to a 2018 report by the U.S. House of Representatives Committee on Science, Space, and Technology. In addition, Russian operatives encouraged, and possibly funded, environmental groups’ protests to block pipeline construction and prevent new oil and gas extraction projects, among other activities.

“The Kremlin manipulated various groups in an attempt to carry out its geopolitical agenda, particularly with respect to domestic energy policy,” the report stated.

Russia’s efforts paid off in Massachusetts and New York. Despite abundant domestic natural gas supplies,residents and businesses in the Northeast pay residential electricity prices that are 44 percent higher than the U.S. average. This is primarily due to political prohibitions on new natural gas pipelines. It doesn’t matter how affordable natural gas is if politicians block the cheapest, safest way to deliver it to market across the region.


In court Tuesday, Kravis said the government does not intend to give Stone’s attorneys further unredacted portions of Mueller’s report “absent an order from the court to do so.”

Kravis said the government has turned over materials to help Stone prepare his case, such as FBI interview reports and grand-jury testimony that could be used to challenge the credibility of government witnesses and other evidence that could be favorable to the defense.

But Kravis said that the government believes portions of Mueller’s report that “relate to mental impressions and conclusions of government attorneys” about the underlying evidence against Stone are exempt from disclosure under federal criminal rules of procedure.

“So you’re saying if there’s information that bears on the credibility of witnesses such as [FBI] statements and grand jury testimony, you have an obligation to turn that over, but if the report contains a [government] assessment of their credibility, that you're not obligated to turn that over, essentially the lawyers’ views on that?” Jackson asked.

Still hiding the pickle.
Posted by Fritz at 8:54 AM