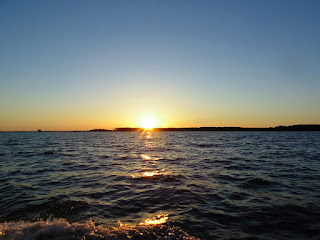 Colonel Ski, Derrick, Tom and I left the dock the dock in Solomons with Pete at 5 PM sharp. The morning sunrise caught us somewhere off Taylors Island, moving north. We hit a few spots along the way north, and caught a few small fish along the way. 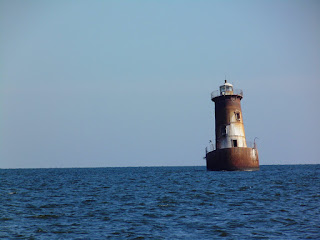 We ended up near this familiar structure, Sharps Island Light, by around 8 AM. We found a good slug of keeper fish on a structure nearby, and rapidly filled our limit (2 fish per customer + 1 for the boat) of stripers, as well as many more.

With the limit caught, Pete offered us a choice; go north and look for more stripers, or go south and try for some Speckled Trout in the Honga River. The decision was unanimous to go south. 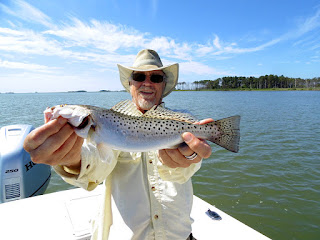 And indeed, some Specks were caught. Three, in fact, although only one made the minimum length, 14 inches. Mine was short by half an inch, but I was especially proud of beating Pete to it. We also found a few more stripers. 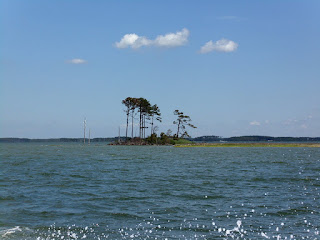 I also hooked a Cownose Ray at one point and whipped it to the boat, before breaking it off deliberately, and had a huge striper hit a top water plug. I felt the fish (not always a sure thing on top water), but didn't hook up solid and lost it.
Posted by Fritz at 7:39 PM