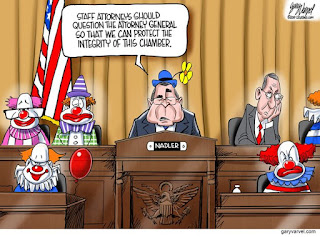 
It was politics at its most dishonest as they tried to argue that up is down and black is white. Barr was mostly stoic, but allowed himself a brief moment to brilliantly summarize the outlandish effort to twist reality.

“How did we get to the point where the evidence is now that the president was falsely accused of colluding with the Russians, accused of being treasonous and accused of being a Russian agent, and the evidence now is that that was without a basis?” he asked. “And two years of his administration have been dominated by allegations that have now been proven false. But to listen to some of the rhetoric, you would think the Mueller report had found the opposite.”

No better, more concise statement has been made about the bankrupt nature of the Democratic Party and its leaders. They bet everything on Mueller validating their Big Lie of Russia, Russia, Russia, and now they have nothing.

Leaks and Barr (by Wolf Howling)

For instance, who leaked the ridiculous Mueller memo to Barr on the eve of Barr’s testimony before Congress? Leaks like this seem so commonplace now, though, in the Age of Deep State v. Donald Trump, that Vanity Fair is running an article on how the DOJ leaked the memo to two sources, WaPo and the NYT: 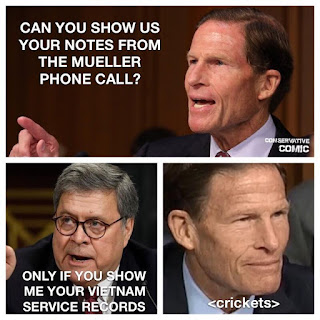 That memo was written to be leaked. Still, it would be fun to open a leak investigation into Andy Weissman, and get a FISA warrant. At PJ Media, Matt Margolis notes that Democrats Accuse AG Barr of Doing Exactly What Eric Holder and Loretta Lynch Did for Obama. Indeed, they know the crime well.

Never Trumper Patterico tries to show The Details of How Bill Barr Has Trashed His Credibility, but mainly succeeds in showing us the depths of his mania. The Perfesser at Legal Insurrection warns that Bill Barr is going to expose Spygate, and the Democrat-Media Russia Collusion Complex is panicking, and Insty nods in agreement. We can hope. I suspect we're going to hear a lot of denial and splitting legal hairs from that crowd before it's all accounted for.

At WaPoo (remember the magic code), Ed Rogers asks Did Nancy Pelosi just jump the shark? More like she tottered over it.


Did House Speaker Nancy Pelosi (D-Calif.) just jump the shark? By stating unequivocally that Attorney General William P. Barr lied to Congress and adding, as if for emphasis, that it is a crime, Pelosi may have thought she was just getting in front of her herd of angry Democrats. But inadvertently, the speaker also revealed, in stark relief, a disturbing new trend in our politics: If you don’t tell Congress what it wants to hear, then you are by default lying and, hence, a criminal.

By this logic, truth is no longer an absolute. It is a relative norm. Barr is never fast and loose with the truth. His real sin, in the eyes of the shouting Democrats, may simply involve being too serious for a day in which men such as Michael Avenatti are able to look in the mirror and see a president. 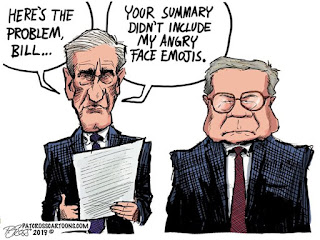 From Da Hill, Anticipation builds for Mueller testimony. People should be careful what they wish for. From Politico, Democrats eye Mueller testimony on May 15, lawmaker says. Trump is not happy, but what can he do, call himself a liar? There are a lot of questions Republican will have for him. I can certainly think of several, and it will be amusing to watch Fat Jerry to to prevent Republicans from asking them. Then he can take a turn in the Senate. MoDo wants to know if After Getting Dissed By Barr, Will Mueller Man Up?, or will he stand behind his report instead? 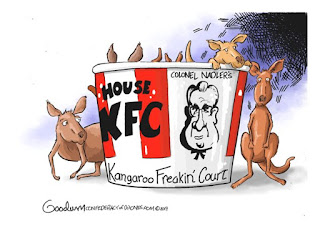 From the Canadian Freepers, The Report On Mueller, a comparison of Mueller's investigation to Fitzgerald's Valeria Plame investigation. Hmm.

Russiagate: The wife of Department of Justice official Bruce Orh’s, Nellie Orh, coordinated the crafting and distribution of the Steele Dossier from within Fusion GPS. Then, operatives were used to entrap George Papadopoulos in a disinformation campaign claiming that Russian’s were helping Trump get elected. (See George Papadopoulos Explains How He Was Illegally Spied on by the Obama Administration—a video—and The Hill’s article Nellie Ohr’s ‘Hi Honey’ emails to DOJ about Russia collusion should alarm us all) . . .

The Peacock, 'Hung jury': Public remains divided over Mueller probe in new NBC/WSJ poll. I doubt the House's shenanigans will change many minds.


In the book, Papadopoulos recounts how Turk contacted him shortly after he arrived in London by sending a text message that said, “Let’s meet for a drink. I’m looking forward to meeting you.”

Papadopoulos said he wasn’t sure if the message was “suggestive” until he arrived at the bar Turk had picked out for them.

“It was definitely suggestive. Azra Turk is a vision right out of central casting for a spy flick. She’s a sexy bottle blonde in her thirties, and she isn’t shy about showing her curves—as if anyone could miss them. She’s a fantasy’s fantasy,” he wrote.

But within five minutes, the book says, Turk began grilling Papadopoulos about the Trump campaign.

“She wants to know: are we working with Russia? ‘I don’t know what you are talking about,’ I say with a nervous laugh — her question is creepy,” he wrote.

But Turk “keeps pushing” and puts her hand on Papadopoulos” arm, telling him he’s more attractive than his pictures suggest and that he’s “doing important work,” Papadopoulos wrote.

“I’d love to hear more about the campaign. It is such a fascinating subject. How is Trump going to win? How can he beat Hillary Clinton?” he recalls her saying. 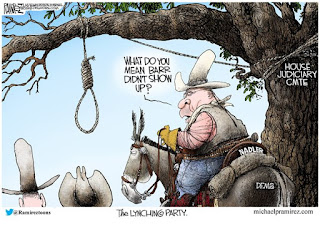 Sundance at CTH, James Comey Justifies FBI Spy Operations – More Reason to Release His Volumes of “Spygate” Memos…. Indeed. Even Ross Douhat, at the NYT, excerpted in Hot Air has some questions about The FBI’s Don’t-Call-It-Spying On The Trump Campaign.

John Solomon on Da Hill, Nellie Ohr's 'Hi Honey' emails to DOJ about Russia collusion should alarm us all, and at Flopping Aces, Dr. John says it Kind of looks like Nellie Ohr was directing the coup against Trump. I doubt it. I think it will track back up to the Obama Oval Office.

Roger L. Simon at PJ Media considers the question Should Journalists Go to Jail for Spreading Russia Lies? and comes down on the side of no, but it's a close thing.  From AllahPundit, Hillary whines You Can Run The Best Campaign And Still Have The Election Stolen From You:


Conversely, you can run a terrible campaign in which you call your opponent’s supporters “deplorable” and so neglect white working-class voters that you don’t bother stumping in Wisconsin and end up losing because you deserved to. True story.

And from NYPo again, Michael Cohen set to share a prison with ‘The Situation,’ Billy McFarland, Yeah? So what?


He’ll be assigned a locker for his personal belongings, and will have access to washers and dryers, a microwave, and an ice machine.

Amenities include tennis courts, horseshoes and cardio equipment. About half the beds go to Jews who, like Cohen, require kosher food and Shabbat services.

It’s no wonder Bernie Madoff asked, unsuccessfully, to be placed there — or that Forbes once ranked Otisville as one of “America’s 10 Cushiest Prisons.”