But then, don't we all? Well, they were busy getting nothing accomplished yesterday, too.

538: Congress Has Few Options Left To Make Barr Cooperate, Even holding him in contempt would be largely symbolic.  DoJ Fires Back: Contempt Vote On Barr Will Result In Full Executive-Privilege Claim On Mueller Report


From the Wombat's In The Mailbox: 05.08.17, Legal Insurrection: Trump Asserts Executive Privilege Over Unredacted Mueller Report. Althouse,  "This is to advise you that the president has asserted executive privilege over the entirety of the subpoenaed materials.", Said a Justice Department official, referring to the Mueller report and the underlying evidence, the NYT reports just now. Ace, White House Invokes Executive Privilege to Protect Unredacted Mueller Report, Tells Nadler and Schiff lol get fucked 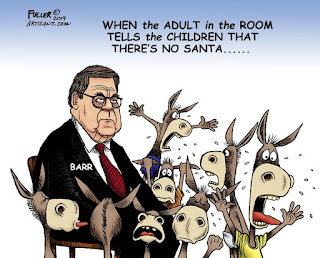 Red State, BREAKING. House Democrats Melt Down As Trump Invokes Executive Privilege Over All Mueller Report Documents. It's what they do, and they do it well. Hot Air,  Nadler whines  Trump’s Using Executive-Privilege Claim To Keep Mueller From Testifying.

Nadler’s doing nothing more here than chumming the waters. Although, it’s possible that his demagoguery might have an unintended consequence — it might make Mueller a lot less willing to join the circus at a House Judiciary hearing.

Da Hill, House Democrats threaten salaries of Trump officials who block interviews. Yeah, what ev. From the NYT via Hot Air, Trump’s Opposition To Mueller Testimony Poses A Test For Barr. Barr is the Honey Badger; he don't care. Pirate's Cove lays bare what it's really all about in Queen Nancy Says Dems Cannot Accept A Second Trump Term "Of course, she and the other Barking Moonbats still haven’t accepted Trump’s first term." 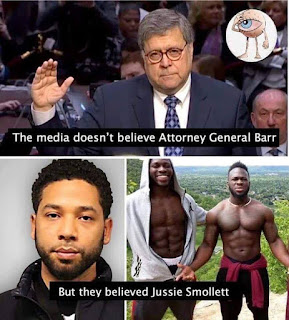 
Why it matters: It's the first congressional subpoena — that we know about — of one of President Trump's children. The subpoena sets up a fight that's unprecedented in the Trump era: A Republican committee chair pit against the Republican president's eldest son.


Between the lines: Mueller, whose investigation did not find a conspiracy between the Trump campaign and Russia, did not indict Trump Jr., despite speculation that he would. 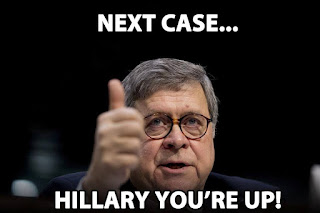 Now lets subpoena Chelsea Clinton to testify about Clinton.com and the deleted e-mails, which is a decent segue in to our "Spygate" section. The big news, which really isn't so much news as confirmation of what was obvious long ago, from John Solomon at Da Hill, Steele's stunning pre-FISA confession: Informant needed to air Trump dirt before election


If ever there were an admission that taints the FBI’s secret warrant to surveil Donald Trump’s campaign, it sat buried for more than 2 1/2 years in the files of a high-ranking State Department official.

Steele’s client “is keen to see this information come to light prior to November 8,” the date of the 2016 election, Kavalec wrote in a typed summary of her meeting with Steele and Tatyana Duran, a colleague from Steele’s Orbis Security firm. The memos were unearthed a few days ago through open-records litigation by the conservative group Citizens United.

Kavalec’s notes do not appear to have been provided to the House Intelligence Committee during its Russia probe, according to former Chairman Devin Nunes (R-Calif.). "They tried to hide a lot of documents from us during our investigation, and it usually turns out there’s a reason for it," Nunes told me. Senate and House Judiciary investigators told me they did not know about them, even though they investigated Steele’s behavior in 2017-18. . . .

And FBI Director Wray is still covering up. Read it all. Ace, Steele Admitted His Clients Were Anxious To Get His Fake Dossier In the News Before the Election; The DOJ Played Hide-the-Ball With The Report Noting This Fact "People need to start being charged with crimes."

From Red State, Mueller Mounted A Full-Court Press To Block Release Of Comey’s Memos; Here’s Why


CNN reports that Robert Mueller tried to block the release of fired FBI Director James Comey’s memos of his conversations with President Trump over their concern that Trump and others might change their stories after reading Comey’s version of events.
Lawyers for CNN and several other media outlets argued for the release of Comey’s memos and related documents at the U.S. District Court in January 2018. At the same time, lawyers for the Special Counsel and the DOJ argued that the release of the documents would interfere with an ongoing investigation.

Mueller prosecutor Michael Dreeben joined the SC and DOJ attorneys in a private hearing with the judge. They showed him copies of the Comey memos and shared specifics about the SC investigation. They ultimately convinced the judge to rule in their favor and to seal the records.

(The CNN writer, Katelyn Polantz, emphasized that this was atypical behavior for a Freedom of Information Act request. CNN lawyers had no knowledge at the time that Dreeben or anyone from the special counsel’s office had taken the unusual step of speaking to the judge in person to keep the records confidential. It wasn’t revealed until later.)

Judge Boasberg wrote: “Having heard this, the Court is now fully convinced that disclosure ‘could reasonably be expected to interfere’ with that ongoing investigation.”
. . .
In reference to the meetings with Trump and other witnesses, Prosecutor Dreeben told the judge, “Special Counsel is attempting to determine the facts that transpired in and surrounding those meetings.”

Regarding Comey’s allegations that Trump had asked for his loyalty and requested that he drop the Flynn investigation, Dreeben explained:


Shortly after the meetings with Comey, Trump and the White House had publicly contradicted the FBI director’s story, saying the President denied asking him about “letting Flynn go.” Comey told his version of the story first during congressional testimony in spring 2017. Dreeben described how the Comey memos were essential evidence in the investigation and included far more detail about the meetings than what the former FBI director had said publicly in testimony.

Dreeben’s next remark was extremely revealing. Dreeben told the judge, “In this instance, a person whose conduct is within the scope of the investigation is the President of the United States.”

So, by January 2018, the investigation had essentially become all about obstruction.

He also “told the judge about how the FBI had opened the obstruction investigation before Mueller’s appointment.”
. . .
The larger point is it tells us that only eight months into a 22 month long investigation, the Mueller team was no longer concerned with Russian collusion. If Mueller were a fair-minded, decent man, he would have let the American people know that their President was not a criminal.

Also via the Wombat's In The Mailbox: 05.08.17, Weasel Zippers gives us Comey Claims He Has No Idea What Barr Is Talking About – “The FBI Doesn’t Spy”. Mediaite, James Comey Pushes Back on AG Barr’s Spying Comments: ‘The FBI Doesn’t Spy,’ They Investigate.


When even Clapper is telling you they spied. Town Hall, Panic! At The DOJ? Obama's Spy Czar Nukes Comey And FBI Director Wray's Assertion That Trump Campaign Wasn't Spied On


James Clapper, a CNN contributor and former Director of National Intelligence, admitted last Friday that what the Obama administration did to the Trump campaign "meets the dictionary definition of spying."

Clapper, who served as the DNI during the Obama administration, appeared on CNN's Situation Room to discuss new revelations that the FBI sent an undercover agent to meet with George Papadopoulos in London in 2016, backtracking from his prior comments about there not being any spying.

"Well, yeah I guess it meets the dictionary definition of spying—surveillance or spying, a term I don't particularly like," Clapper said. "It's not a term used by intelligence people. It has a negative connotation, a rogue operation, out of control, not in compliance of the law, and that's not the case at all."

PJ Media, How Brennan and Clapper Are Still Working as Agents of Influence for Russian Military Intelligence


“Useful idiots” were people who unwittingly bought into the propaganda of the other side, and spread those ideas through a misplaced sense of right and wrong.

“Agents of influence,” are somewhere between the two. They aren’t directly employed by the enemy; but they spread enemy propaganda from a lofty position that influences ordinary people to believe it. And they do it on purpose.

Since 2016, former CIA Director John Brennan, and former Director of National Intelligence James Clapper have acted as agents of influence for the Russian GRU—and they had to know it.

Comey also asserted Trump’s “Frustration” Over The Russia Probe Doesn’t Let Him Off The Hook For Obstruction. Firing Comey for cause was not obstruction, it was good management.

Following yesterday's Cohen new AllahPundit follows with, Did Michael Cohen Leak The Trump Tax Information That Was Published By The NYT?


Brian Kilmeade floated this theory almost offhandedly on “Fox & Friends” this morning. There’s no evidence to support it but (a) the Times *did* note in its story that “it received the information contained in the returns from someone who had legal access to it,” which Trump’s former attorney presumably did at one point, and (b) I like it because it fits with my own half-assed speculation that maybe Cohen is trying to squeeze Trump for an unlikely pardon by reminding him how much dirt he has on him and associates like Jerry Falwell Jr. 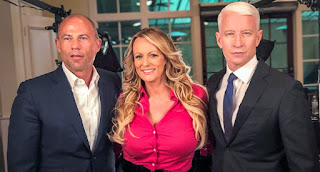 And, thank heavens, Stormy (NSFW) is back in the story! Stormy Daniels’ Shocking Confession: I’m Not Sure Trump Is Worse Than Avenatti. Worse at what?


Daniels went on to breeze through a number of questions about Michael Avenatti, her recently indicted former attorney. Asked if she was ever attracted to Avenatti, Daniels revealed that she was actually never alone with her ex-lawyer—“not once.” Besides, she quipped, “he thought he was prettier—that’s a huge problem for me.” Responding to a follow-up—who’s a better person, Trump or Avenatti?—Daniels seemed uncharacteristically stumped, conceding, “I don’t know.”

She has notoriously bad taste in men.
Posted by Fritz at 8:27 AM