Now that Memorial Day weekend is over, it's unofficially summer!


Despite these overt warnings, the President’s actual order appeared to catch many in our nation’s capital by surprise. Olivia Gazis, the Intelligence and national security reporter for CBS News, said she was told by “an intel source that the president’s order came as a complete surprise and generated widespread concern within the community about this trajectory.”


Now, there is another fight about declassification. Nunes himself has heard this all before. "Every time we have tried to get information on the Russia hoax, the Left as well as the media and their leakers claimed it would devastate national security," Nunes said in a text exchange. "Now we hear the same argument from the same reporters, leakers, and leftists, even though all their previous doomsday warnings proved false. These people simply use national security as a false justification to hide information that would reveal their abuses."


I was deeply touched by the concern implicit in the Julian Barnes and David Sanger New York Times story reporting President Trump’s authorization of Attorney General Barr to declassify the documents underlying the greatest political scandal in American political history — i.e., the Russian collusion hoax. Their concern for national security permeates the story. There it is right at the top, for example, in the lead paragraph:


President Trump’s order allowing Attorney General William P. Barr to declassify any intelligence that led to the Russia investigation sets up a potential confrontation with the C.I.A. It effectively strips the agency of its most critical power: choosing which secrets it shares and which ones remain hidden.

Considering that the power of declassification resides preeminently in the president as head of the executive branch, one might think that the Times’s concern is excessive. Declassification will proceed lawfully and Attorney General Barr is in a good position to assure that no damage is done to national security. As I say, however, one can’t help but be touched by the Times’s concern.

Yet Barnes and Sanger somehow overlooked the many cases in which the Times itself stripped the CIA of “its most critical power,” and did so without the color of law. To say the least, previous cases reflect the Times’s casual malice toward national security. Perhaps we should pause over one or two such cases in the hope that we might catch the Times in an introspective mood.

Michael Goodwin, NYP writes Donald Trump makes good on a promise but Dems cry ‘coverup’ "The president is going nuclear." It's hard to complain about declassification and a coverup at the same time, but Democrats manage somehow. Rich Lowry from NR, Nancy Pelosi’s Accusation of a Trump Cover-Up Incomprehensible

Brennan's Orange Jump Suit, In view of the MSM's new-found interest in keeping things classified, let's review a little bit of what occurred in early January of 2017. As Don Surber notes, The press serves the Deep State


The press is alarmed.

That is from the newspaper that published the Pentagon Papers. The story won a Pulitzer.

The New York Times said, "President Trump’s order allowing Attorney General William P. Barr to declassify any intelligence that sparked the opening of the Russia investigation sets up a potential confrontation with the C.I.A., including over the possible implications for a person close to President Vladimir V. Putin of Russia who provided information to the C.I.A. about his involvement in Moscow’s 2016 election interference.

"The concern about the source, who is believed to be still alive, is one of several issues raised by Mr. Trump’s decision to use the intelligence to pursue his political enemies. It has also prompted fears from former national security officials and Democratic lawmakers that other sources or methods of intelligence gathering — among the government’s most closely held secrets — could be made public, not because of leaks to the news media that the administration denounces, but because the president has determined it suits his political purposes."

That is from the newspaper that in 2005 published a report on spying on terrorists despite pleas from the Bush administration that people would die. The story won a Pulitzer.

Lindsey 2.0 in action. At WaEx, Graham says intel officials concerned about exposure of 2016 misbehavior. Yep. From Town Hall, Lindsey Graham Chimes In On Declassifying Russia Probe Document And Dems Won't Like What He Has To Say. Sundance at CTH has the video: Senator Lindsey Graham Discusses: Trump, Declassification, Barr and Possible Senate Hearings…

The Federalist Papers report that Graham Warns Pelosi, Do This And Lose Your Job


‘She knows that impeachment would be political suicide because there’s no reason to impeach the president,’ Graham said on ‘Fox News Sunday.’

He claimed Pelosi’s real motive is trying to keep her Democratic Party together and not lose control of the House of Representatives.
He warned she would lose control the House in the 2020 election if she pursued impeachment charges.

‘She’s trying to keep the party intact. If she goes down the impeachment road, Republicans take back the House, we keep the Senate, President Trump gets reelected, but her job is very much at risk,’ he said.

‘So what I think is going to happen here – I think that she’s going to be driven towards impeachment. If she goes down that road, it will be suicide for the Democratic Party. From President Trump’s point of view, I disagree with the idea that you can’t work with them while they’re doing things like this. You have to work with him,’ he added.

The Bookworm Room, Progressives collude to prevent investigation of attempted coup. The National Sentinel, The table has turned on the ‘Trump-Russia’ hoax and now the conspirators are running for the hills. Victor Davis Hanson at AmGreat writes of Colluders, Obstructionists, Leakers, and Other Projectionists. It's VDH, read the whole thing.

At Gateway from Joe Hoft, In Latest Transcript Release NY FBI Asst Dir Sweeney Tosses Comey Under Bus — And Has No Idea What Happened to Weiner Laptop, and a useful review of how Anthony Weiner's laptop contributed to the story.

The Obama Administration’s corrupt FBI, DOJ and AG all were working to cover-up and stop an investigation into Anthony Weiner’s laptop emails before the 2016 election.

An individual or a group of individuals forced these crooks to open up the second Hillary email investigation in late October.

AG Lynch may have tried to use the Garner investigation to coerce individuals in New York to stop looking into Weiner’s emails.

All these Obama crooks were hoping for a Hillary win.

Brian Cates at Epoch Times wonders Just How Many Other Trump Campaign Members Were Targets of FISA Court Investigations? We're pretty sure of four, Carter Page, George Papadopuolos, Michael Flynn and Paul Manafort. But were there others? Will we ever find out? John Hinderacker at Power Line wonders Did It Start With Israel? The Obama admin was furious that the incoming Trump administration was going to change their anti-Israel, pro-Palestinian policies, and were doing what they could in advance to thwart them. 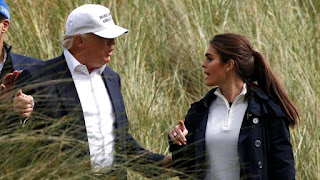 
The New York Times is facing criticism from the Left on social media for an article about former White House communications director Hope Hicks.

The Times and reporter Maggie Haberman were the target of some on social media for an article that said Hicks is “facing an existential question” about whether to comply with a congressional subpoena. 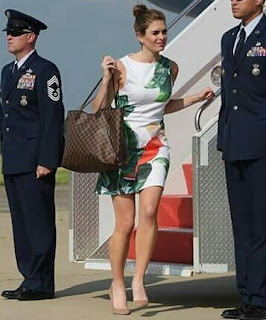 
The article begins: “One of the best-known but least visible former members of President Trump’s White House staff is facing an existential question: whether to comply with a congressional subpoena in the coming weeks.”
. . .
Some left-wing social media figures and politicians weighed in on the piece, which also featured an image from a professional photoshoot of the 30-year-old Hicks.

“It’s not a decision. She was subpoenaed,” Democratic Rep. Seth Moulton of Massachusetts tweeted Sunday.

From the NYPo, David Harsanyi tells Democrats Impeach or get off the pot. In this respect, they have chronic diarrhea.


It’s difficult to believe anyone really thinks impeachment is a good idea after an independent investigation blew up the Russiagate conspiracy. But Democrats run the House. They have the votes to get it done. According to their own rhetoric, they have a duty to impeach no matter what the Senate does. An impeachment proceeding that compels Democrats to lay out their case would be far preferable to this show trial — what the Wall Street Journal editorial page dubbed “The Pseudo-Impeachment.”

Let’s do it already.

Bill Scher at RCP, The (Political) Case for Impeachment Doesn't Hold Up, which doesn't' matter at all to the Democrats, for whom it's all about revenge, first for impeaching Bill Clinton, and second for beating Hillary Clinton.

Now go out an enjoy your summer!