In my humble opinion, the story of the day is the House preparing to cite Attorney General Barr for contempt of Congress for his failure to turn over secret grand jury information and classified data redacted from the Mueller Report. WaPoo, House Democrats move closer to holding Barr in contempt, raising questions about fate of former Trump counsel Donald McGahn (Magic link) This, of course, is partially revenge for the Republicans (and a few Democrats) actually voting contempt on the Eric Holder over his refusal to provide documents from Fast and Furious, and partly just general pissiness and frustration. WaT, Turnabout: Barr deploys Holder defense to stymie Democrats in Congress. But he has better grounds, the grand jury and classified material. At the Peacock, Michael Conway says If William Barr continues to defy subpoenas, Watergate offers House Democrats several options. At Da Caller, Assistant AG Boyd Tells Nadler: No ‘Legitimate Basis’ For Requesting Full Mueller Report. According to the NYPo editorial board, Jerry Nadler is just blowing smoke anyway. Meanwhile, Politico reports DOJ moves to fend off Barr contempt vote.


In a letter to Nadler earlier Monday, Assistant Attorney General Stephen Boyd invited the chairman to a negotiation session on Wednesday to discuss an “acceptable accommodation” that would potentially give more lawmakers access to a less-redacted version of the report, in addition to “possible disclosure of certain materials” cited in Mueller’s report.

But it's all-American to hold Congress in contempt; don't we all, conservatives, liberals and centerists alike? Is there a more contemptible group of people in America outside of prison? 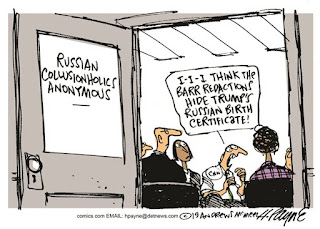 At Mediaite, John Ziegler wails that  With Their Reaction to Bill Barr’s Deception, ‘Conservative’ Media Has Fallen From State-Run to Lobotomized, but according to Hugh Hewitt, from the WaPoo, Democrats have done Republicans a huge favor. At AmThink, Clarice Feldman writes of Tragedy Tomorrow, Comedy Tonight. Dr. John at Flopping Aces, If I am Trump I put heavy security around Bill Barr. "Do I think that democrats will grow so desperate that they would resort to physically harm Barr? You bet I do." Scott McCay at AmSpec, Stuck Pigs - The Democrats aren’t fooling anybody with their Bill Barr bluster. WaPoo, Sen. Klobuchar on Russian interference: Trump ‘makes it worse by calling it a hoax’ Hot Air, citing NYT, Trump’s Other Impeachable Offense. If all you have is a hammer. . . 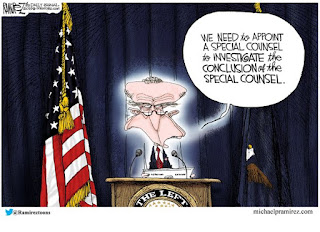 Brian C. Joondeph at AmThink says Mueller Rewrites Jurisprudence – Guilty Until Proven Innocent, but then, he wasn't the first to notice. Margot Cleveland at Da Fed, Major Report Omission Shows Mueller Was Either Incompetent Or A Political Hack "Not once in the 448-page tome does Mueller mention an investigation into whether Russia interfered with the U.S. presidential election by feeding dossier author Christopher Steele misinformation." Instapundit quips "Embrace the healing power of 'and'". David Kendall at WaPoo opines Mueller’s conclusion was a dereliction of his duty. I think Barr agrees, but comes down on the opposite side of obstruction. Speaking of which, the WaPoo dutifully finds hundreds of former federal prosecutors who assert Trump would have been charged with obstruction were he not president. How many thousand former federal prosecutors are out there, and how many are Democrats? Sarith Pradhu at De Fed, Donald Trump’s Biggest Crime Was Winning The 2016 Election. Yep.

WaPoo again, In reversal, Trump says Mueller ‘should not testify’ before Congress. Sure, he'll come across as "more in sadness than in anger" with a lot of bad things to say about Trump under Democrat's questions, but there are a lot of questions about the investigation that I'd like to see answered, and Democrats can't exactly complain that it's too secret after their treatment of Bill Barr. Joel Mathis at Da Week enthuses that Trump is terrified Mueller will become a TV star. What, a reboot of the Adams Family? He's a perfect Lurch! Abraham Miller at AmSpec, in Mueller, the Democrats, and the Historic Great Disappointment, likens Democrats faith in Mueller to the doomsday cults of yore. Instapundit, The Mask Slips, Rep. Al Green: If We Don’t Impeach Trump, He Will Get Re-Elected. But then the mask didn't hide that much. 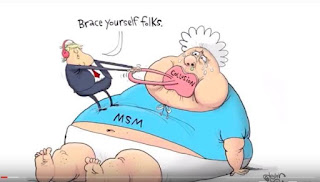 Starting off our Spygate section with several from the Wombat's In The Mailbox: 05.06.19, American Greatness: The Fright Of James Comey, American Thinker: When Will Trump Finally Drop The Hammer On The Deep State?, Don Surber: CNN Anchor – Trump Broke Me, also, Obama’s Spies Are Running Scared and JustOneMinute: Very Interesting

The last references the article by Andrew McCarthy The FBI’s Trump-Russia Investigation Was Formally Opened on False Pretenses, which, claims upon closer reading of the Mueller report, some interesting deductions. 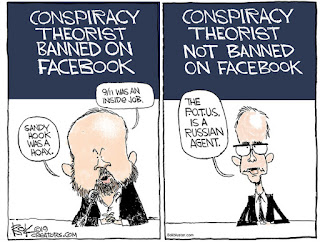 Glenn Kessler, the WaPoo head fact checker helpfully provides the evidence for ‘spying’ on Trump’s campaign? Here’s your guide. For Glenn, it's shockingly objective. At Da Caller, Peter Strzok Suspected CIA Was Behind Inaccurate Media Leaks. The CIA is in need of serious reform.


“Think our sisters have begun leaking like mad. Scorned and worried and political, they’re kicking in to overdrive,” Strzok wrote Page.

Strzok did not identify a specific leak, but a day earlier, NBC News broke a bombshell story that Russian President Vladimir Putin was personally involved in the U.S. election hacks. The story was sourced to “senior U.S. intelligence officials.”

And speaking of scorned. Hot Air cites the paywalled WSJ in Liberals Nod As Comey Begs The Question


In that sense, Mr. Comey’s op-ed nicely captures what ails present-day American liberalism. Its defining characteristic is a labored ignorance of the other side. Liberals frequently neither know nor care to learn what nonliberals think. Their own views predominate in the universities and media; why bother considering lesser ones? Liberals take the other side seriously mainly when it has the bad manners to win an election and hold power.

As sad story from WaPoo, American Paul Whelan gets letters to his family from Moscow jail. But Russia remains quiet on spy claims. To all appearances, he was seized and held hostage by the Russians in revenge for our arrest, prosecution and jailing of Maria Buttina, whose offenses were essentially free speech. I hope they quietly arrange a swap in the near future, for both of their sakes.

Another reminder from Frontpage Mag, Dems Colluded With Ukraine Against Trump. It's just OK when Democrats do it, AmIright? Kurt Schlicter, Town Hall, Our Lying Garbage Media Is Lying Garbage, But You Knew That


Imagine what a real media would do faced with overwhelming evidence that the previous administration used the FBI, CIA and NSA to spy on the other party’s political campaign. Yeah, they might be a tiny bit interested in unraveling a scandal that, comparatively, makes Watergate look like pulling off a mattress tag. But no. Not only are they actively not curious about this almost unbelievable outrage, but they are actively attempting to cover it up on behalf of their liberal masters. 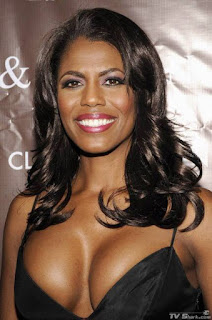 That font of truth, Omarosa: White House Destroyed Evidence Meant For Mueller Investigation, and speaking of truth and sour grapes, Michael Cohen Before Reporting To Prison: I Hope A Xenophobe Isn’t Still Leading The Country When I Get Out


I guess he figures that, having broken with Trump on personal matters, he’s dead to Trumpworld now no matter what. If he wants any kind of life after prison, especially in Manhattan, he’s better off breaking with him on everything and hoping liberals grudgingly tolerate his reentry into society. Odds are no worse than fair that convicted Trump henchman Michael Cohen will be better received in Democratic social circles in the future than Kirstjen Nielsen will.

And that, my friends, is enough for today.
Posted by Fritz at 10:47 AM