Reason #6716 That Trump Was Elected


An Immigration and Customs Enforcement pilot of new rapid DNA testing at the border has found that nearly a third of those tested were not biologically related to the children in their custody. 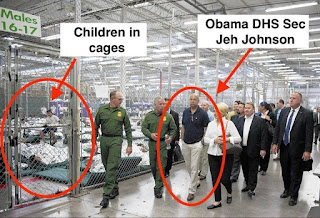 So what do they do with the children being used to perpetrate these frauds; try to seek out their true parents and return them, or just put them into the "Obama cells?"

ICE conducted the pilot for a few days earlier this month in El Paso and McAllen, Texas, finding about 30 per cent of those tested were not related to the children they claimed were their own, an official told the Washington Examiner.

It is unclear whether every family unit was tested during the pilot, or only those who raised some sort of red flag. An ICE spokesman did not immediately respond to request for comment.

At 30%, I suspect some sort of screening was used to select cases more likely to represent fraud, mostly to find out if this technology is worth the trouble. I hope that once ID fraud of any sort is detected by DNA (or any other positive means for that matter), the perpetrator is put on a list permanently barring them from claiming refugee status.


The official said that some migrants did refuse the test and admit that they were not related to the children they were with, when they learned their claim would be subjected to DNA proof.ICE said the Department of Homeland Security would look at the results of the pilot to determine whether to roll out rapid DNA tests more broadly.

After President Donald Trump's administration backpedaled on 'family separation' in the face of enormous backlash last summer, the number of family units arriving at the southern border has skyrocketed. Current U.S. law and policy means that Central Americans who cross the border illegally with children can claim asylum and avoid any lengthy detention in most cases.

I would advocate for taking DNA samples from all people apprehended at the border as a positive ID. Once border jumpers learn that attempted family unit fraud and multiple fake IDs result in their being flagged for immediate deportation, it should significantly reduce the motivation to attempt it.