Escaping the paywall at WSJ, Barr Says Review of Origins of Russia Probe Could Lead to Rule Changes and from Sundance at CTH, Does Barr’s Transparency With Mueller Report Indicate a Positive Shift for IG Horowitz Report?…

In short, the 2018 IG report of DOJ/FBI conduct during the Clinton investigation was heavy on narrative engineering; contained the fingerprints of institutional participants focused on justification (ie. ‘small group’); and was devoid of accountability for the bigger issues outlined within it.

The question becomes: will the 2019 IG report on DOJ/FBI handling of the FISA application process suffer the same outcome?

For the upcoming report the diminutive influence of Jeff Sessions is gone; the institutional protective influence of Rod Rosenstein is gone; and the corrupt intents of Andrew Weissmann and Robert Mueller are gone. Unfortunately, on the FBI side, Chris Wray, David Bowditch and Dana Boente remain; along with the 40 “rank and file” FBI investigators who participated in the 2016, 2017 and 2018 operations.

Will Attorney General Bill Barr be more willing to allow the IG report to shine a light on DOJ/FBI issues and politically manufactured FISA submissions?

If the intent is to build public confidence in both institutions a third IG report without accountability is not likely to advance the goal. And, as we see with the Papadopoulos entrapment operation and the recent redactions to the Kavalec report, the corrupt ‘rank and file’ are very clearly still present.

From the Epoch Times, Probe Into Russia-Trump Investigation Will Figure Out if Officials ‘Put Their Thumb on the Scale’: Barr, or rather, how much.

At Da Caller, Comey Quotes Communist Leader Lenin, Accuses Barr Of ‘Sliming His Own Department’. He' just calling a spade a spade.  Jonathon Turley:  House Judiciary in for 'world of hurt' if they sue Barr.

National Sentinel, ‘Bull’ Durham: New Russiagate prober has been haunting the FBI for months I think my nickname is going to stick.

The Market Ticker tries to explain the Mueller Report:


On collusion: There was no "strong evidence" say much less anything that would rise to probable cause. At all.

On obstruction: It's complicated.

One of the reasons its complicated is intent. All criminal statutes require mens rea, with only a smattering of exceptions (oddly enough the statute Hillary violated with her "email server" does not require intent; negligence is sufficient. Nonetheless remember, she was not prosecuted.)

Obstruction is a funny statute though, in that you can obstruct an investigation into something that didn't happen. The reason for this is that the prosecution is presumed not to be corrupt!

In this case we know it was. Specifically, we know the originating event that led to Mueller's appointment was the Steele Dossier which was a piece of opposition research paid for by a political opponent's campaign during the election and that the origin of the alleged "evidence" that gave rise to the investigation was intentionally concealed from a FISA judge and worse, it wasn't just concealed -- the FBI affirmatively lied.

Had they not lied the FISA judge would have never approved anything and there would have been no Mueller; a mere assertion alone by Ohr or Strzok without alleged facts doesn't get there. The FISA warrant on alleged verified information does. But.... the FISA warrant was predicated on repeated lies. Not mistakes -- perjury. That's a felony standing alone.

Via Sundance at CTH, Sharyl Attkisson Discusses “Spygate” as a Cover Operation…. "CTH agrees, everything after March 9th, 2016, is a function of two intelligence units, the CIA and FBI, operating together to cover-up prior political surveillance operations." Sharyl is one of the few media heroes in all this.

At The Lid, Christopher Steele’s Dossier ‘Sources’ Were Confirmed Agents Of Russia. So Mueller  was wrong, there were Americans who colluded with the Russians to influence our elections. It was Hillary Clinton and the DNC, though.

I do wonder, at what point did the FBI realize that the Steele dossier itself was actually Russian disinformation? Before or after they used it as evidence to obtain a warrant to spy on an American citizen?https://t.co/mZGTy6h26f
— Nick Short (@PoliticalShort) May 17, 2019


Twitchy, ‘Game changer’: Trey Gowdy says one transcript between George Papadopoulos and an FBI informant could be YUGE. Unfortunately, it's still classified. More at CTH, Trey Gowdy Says He Has Seen Exculpatory Transcripts of FBI Spies Engaged With Papadopoulos…


And some of us have been fortunate enough to know whether or not those transcripts exist; but they haven’t been made public and I think one in-particular is going – it has the potential to actually persuade people. Very little in this Russia probe I’m afraid is going to persuade people who hate Trump, or who love Trump, but there is some information in these transcripts that I think has the potential to be a game-changer if it’s ever made public. 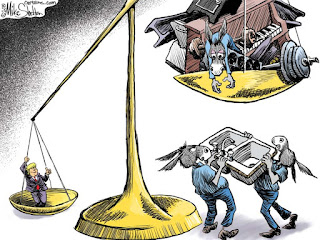 
Danik’s FOIA lawsuit is focused specifically on McCabe’s text messages and emails. The search terms are related to all of McCabe’s connections with Hillary Clinton and person’s known to have associated with both him and family members connected to the Clintons. Judicial Watch filed the lawsuit for any information containing the name of McCabe’s wife, “Dr. Jill McCabe,” “Jill.” Jill had unsuccessful campaign for the Virginia state senate in 2015, when she was urged by then Virginia Gov. Terry McAuliffe to run for office.

Don Surber, Comey's book could convict him. That would be appropriate; he's such a drama queen.


I trust that prosecutors will consider using his book against him. One problem for liars is keeping their story straight. His book will straighten him out.

By the way, I am convinced he is the Designated Indicted Co-Conspirator. Someone will take one for the team. Why not him?


To the fomenters of the coup against Donald Trump in the CIA, FBI and DOJ, we can add at least one high-ranking State Department official.

We have released four pages of documents from the U.S. Department of Justice showing a conversation between former Deputy Assistant Secretary of State for the Bureau of European and Eurasian Affairs Kathleen Kavalec and former Associate Deputy Attorney General Bruce Ohr, discussing the targeting of Donald Trump with Steele dossier material.

In discussing a meeting with the potential source for a Mother Jones article accusing the Trump campaign of taking money from a Russian-American oil magnate, as well as Christopher Steele’s connection to that source, Kavalec emails Ohr citing the accusatory Mother Jones article. Ohr says, “I really hope we can get something going here.”

Gateway Pundit, EXCLUSIVE: Deep State Corrupt Couple – Bruce and Nellie Ohr – Caught in Another Lie, but it's only obstruction of Justice if a Republican does it.

More Judicial Watch, Judicial Watch: Obama Knew Of FOIA Request, Knew Clinton Was Using Private Servers. Is anyone surprised? I think this is a case of keeping your enemies closer.

.@MZHemingway said "Trump was falsely accused of treason for years... I don't think the media have handled or responded properly enough to the realization that was a false accusation." #MediaBuzz
— #MediaBuzz (@MediaBuzzFNC) May 19, 2019


And in what may prove to be real news,

British spy chiefs were briefed on Christopher Steele’s dossier before Donald Trump knew of its existence.

Heads of MI5, MI6 + one of Theresa May’s most trusted security advisers all knew of the Russian links claims before Trump.


At which point Judge Nap ran into trouble at Fox, and has been devoutly anti-Trump ever since. WTF?


But more to the point, Biden represents a political party that could not accept the 2016 election of Donald Trump on any level, before or after his victory. Their supporters taking to the streets almost immediately, they and their compliant media were talking about impeachment before Trump was even inaugurated.

Where was Biden in that extraordinarily divisive behavior? Not uttering a peep, as I recall.

As is becoming increasingly evident, the previous Democrat administration, of which Joe was a significant member, was up to its eyeballs in skullduggery, working through allies in the Department of Justice and the FBI (and the CIA and the State Department, apparently) to undermine the Trump presidency before it got started. This gave rise to the Mueller probe that tarnished Trump with outrageous accusations of non-existent Russia collusion for over two years, an act of sabotage unprecedented in our history. Again not a word from Joe.

This was divisiveness taken to the nth power. Yet Biden is advertising himself as the decent man of moderation, our new uniter-in-chief, who will cure all this. As if.

Now the entire Russia probe is starting to come apart as its corrupt predicate is under investigation from several sources. (Ever wonder why Mueller suddenly isn't testifying in front of Congress? Were you he, would you like to answer questions about when you first knew there was no collusion and why you never said anything? The problem for Mueller is that they say he wasn't charged with looking at the origins of the investigation -- the Steele dossier, FISA, etc. But how could you really make that investigation in any thorough or even decent manner without doing that?)

The bigger question is whether Joe Biden -- our new uniter -- knew in any way about these treasonous games and/or whether he was directly involved. If it's only the former, it's despicable enough and completely disqualifies him as a uniter of any kind -- or as a candidate for the presidency for that matter.