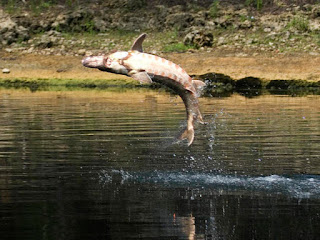 Skyrocketing Sturgeon - Once sparse, the population of the prehistoric species is surging back

In 2005, while in graduate school at Virginia Commonwealth University, Matt Balazik initiated a project on Atlantic sturgeon in the James. Now he works for the U.S. Army Corps of Engineers as chief researcher on sturgeon in the river, primarily tagging and tracking adults of the species, but also surveying hatchlings.

“We’ve been looking for young-of-year sturgeon for about a decade,” Balazik says. “We’ve been doing in-depth surveys since 2012, and we never caught one until last fall. Then we caught 272.” 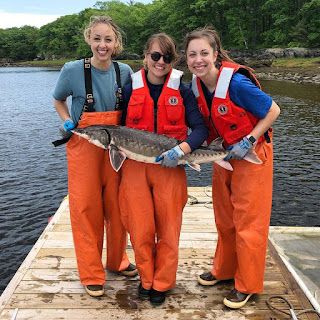 It will be interesting to see if this is a continuing improvement, or a spike in a relatively low baseline number. We often see that in fisheries, and the reasons are not particularly well understood. 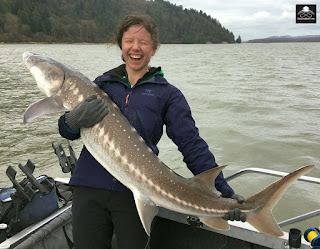 The Atlantic sturgeon is an ancient ocean-dwelling fish that makes spawning runs into freshwater rivers every year. It was once a dominant force in the James, until overfishing and habitat loss dealt a severe blow to its status in the postbellum era, nearly exiling it from the river completely. But in the late 1990s, the U.S. Fish and Wildlife Service began to hear reports from commercial watermen that the sturgeon was still around.

A friend of mine once caught one in the Patuxent River in the course of a scientific survey.


Today, the sturgeon population in the James is relatively healthy, Balazik says, though it is impossible to know what the population was like before human impact.

There are four age classifications for a sturgeon: young-of-year, juvenile, sub-adult and adult. Young-of-year sturgeon are born within the last year. Juvenile sturgeon are at least a year old, but have yet to leave their natal river. Once the fish has taken its first journey to the ocean — in the James, that’s around year three — it is called a sub-adult. The sturgeon is not a full adult until it reaches sexual maturity, which is around 10 years for males and 16 for females. A sturgeon can live for 60 years, and, fully grown, typically weighs 90 to 160 pounds and measures 5 to 6 feet in length, according to the Chesapeake Bay Program. The largest sturgeon on record was 14 feet long and weighed more than 800 pounds. 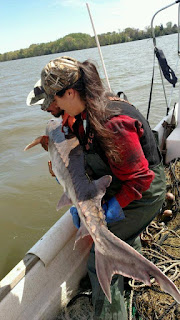 I look forward to a viable population for fishing, like they have in the Columbia River. But not in this lifetime.


Once the sturgeon reaches adulthood, it returns to freshwater — usually its place of birth — to spawn.

“The young-of-year sturgeon are the barometer of progress,” Balazik says. “Those are the future generations.”

A variety of factors could have led to the sudden deluge of baby fish. The first is a moratorium on fishing ordered in 1998 by the Atlantic States Marine Fisheries Commission, which banned fishing and poaching of the Atlantic sturgeon from Maine to Florida. Because it takes females 16 years to reach sexual maturity, many of the fish saved by the moratorium are only recently able to reproduce.

Damn, that's slower than some people.