Not the best collection; a lot of old news being rehashed.

From Politico, Mueller’s House testimony likely off until at least June. I still don't think Democrats really want Mueller to testify, he might say too many unpleasant truths. They just want the issue.  According to Byron York: Mueller changed everything


From now on, the Trump-Russia affair, the investigation that dominated the first years of Donald Trump's presidency, will be divided into two parts: before and after the release of the Mueller report. Before the special counsel's findings were made public last month, the president's adversaries were on the offensive. Now, they are playing defense.

The change is due to one simple fact: Mueller could not establish that there was a conspiracy or coordination between Russia and the Trump campaign to fix the 2016 election. The special counsel's office interviewed 500 witnesses, issued 2,800 subpoenas, executed nearly 500 search-and-seizure warrants, and obtained nearly 300 records of electronic communications, and still could not establish the one thing that mattered most in the investigation.

Without a judgment that a conspiracy — or collusion, in the popular phrase — took place, everything else in the Trump-Russia affair began to shrink in significance.

In particular, allegations that the president obstructed justice to cover up a conspiracy were transformed into allegations that he obstructed an investigation into a crime that prosecutors could not say actually occurred. Although it is legally possible to pursue an obstruction case without an underlying crime, a critical element of obstruction — knowledge of guilt — disappeared the moment Mueller's report was released.

Of course, TV talking heads are still arguing over obstruction. But with the report's release, the investigation moved from the legal realm to the political realm. And in the political realm, the president has a simple and effective case to make to the 99.6% of Americans who are not lawyers: They say I obstructed an investigation into something that didn't happen? And they want to impeach me for that?


Barr, however, isn’t stopping there: According to his testimony, he is also reviewing the special counsel’s investigation to determine what the special counsel looked into. From that inquiry we will learn whether Mueller’s team buried any facts or failed to pursue leads indicating, for example, that dossier author Steele lied about his Russian source, or instead that the Kremlin fed Steele misinformation in order to interfere in the 2016 presidential election—a question on which the special counsel report was silent. 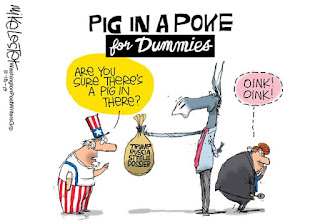 This report is making the rounds. Gowdy seems to have seen documents that cast a lot of doubt on the FISA applications for at least Carter Page, and maybe more. I think he's stumping to get them declassified.  The WaEx, Trey Gowdy: FBI withheld 'game changer' transcript material from FISA Court. Capt. Ed at Hot Air, Gowdy: You Gotta Read This One FISA-Warrant “Game-Changer” FBI Transcript. Ace, Gowdy: FBI Probably Has Exculpatory Evidence About Trump-Russia Collusion, But Didn't Reveal It To the FISA Court When Seeking Warrants Potentially a "game-changer," he says.


This thread presents persuasive evidence that Mueller's team -- the team that doesn't leak, supposedly -- leaked highly derogatory information about Trump to the NYT and thereby gifted the Times with a Pulitzer.

Victor Davis Hanson takes on the finger pointing among Clapper, Brennan and Comey. It's not exactly new, but you should read it all because of the way VDH says it. He Did It, Not Me!


The appointment of William Barr as attorney general has sobered the lawbreakers, and perhaps soon the media, which may not wish to go down the drain with their erstwhile FBI and CIA speaking-truth-to-power heroes.

No longer are Brennan, Clapper, Comey, and McCabe along with a host of others insisting that they acted nobly. No longer are they in solidarity in their defiant opposition to Donald Trump.

Now, for the first time, they are pointing fingers at one another, because they have come to realize that their prior criminality may not be rewarded, praised, or even excused, but rather prosecuted.

From Fox Business,  Brennan may have set his own perjury trap: Judge Napolitano


“I haven't seen the e-mail obviously, but if the e-mail is correct, it directly contradicts what Brennan said under oath, which is another thing for the folks in Connecticut to examine whether or not the former director of the CIA perjured himself in order to make himself look good,” Judge Napolitano told Bartiromo on “Mornings with Maria”Opens a New Window. on Monday.


Fox News reports former Attorney General Loretta Lynch has flatly accused former FBI Director James Comey of mischaracterizing her statements by repeatedly alleging, under oath, that Lynch privately instructed him to call the Hillary Clinton email probe a "matter" instead of an "investigation."

Lynch, who testified that Comey's claim left her "quite surprised," made the dramatic remarks at a closed-door House Oversight Committee hearing last December.

Via the Wombat's In The Mailbox: 05.20.19. Power Line has Spy Vs. Spy Euphemism "What we have here is failure to communicate…truthfully." Power Line also brings Emails Show Deep State Conspiring Against Trump. From Sundance at CTH, Sunday Talks: Maria Bartiromo Interviews Rep. Doug Collins….

Here are my principal conclusions:
1. Attorney General Barr has deliberately misrepresented Mueller’s report.
2. President Trump has engaged in impeachable conduct.
3. Partisanship has eroded our system of checks and balances.
4. Few members of Congress have read the report.
— Justin Amash (@justinamash) May 18, 2019

Amash does not offer specifics. Barr's letter summarizing Mueller's conclusion was entirely accurate. Barr said the report concluded there was no collusion, coordination, or conspiracy between the Trump campaign and the RUSSIANS. Barr said that Mueller did not make a decision about whether the president committed obstruction of justice. How is that misleading? Why would Barr lie about the report and then release it? None of these things makes sense. But you know what does make sense? That Amash wants to run for president as a libertarian.

And the President's entirely predictable response, via Da Caller, Trump Hits Back Against GOP Rep Who Took Stance On Impeachment: ‘Justin Is A Loser’

Never a fan of @justinamash, a total lightweight who opposes me and some of our great Republican ideas and policies just for the sake of getting his name out there through controversy. If he actually read the biased Mueller Report, “composed” by 18 Angry Dems who hated Trump,....
— Donald J. Trump (@realDonaldTrump) May 19, 2019