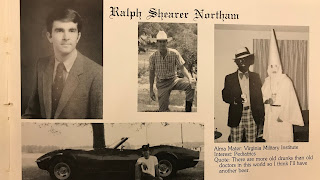 So he must be guilty, AmIright? That's the new standard. WaPoo (secret 30 day code), The report on the Northam blackface scandal is a big fat shrug


AFTER HIS initial, unequivocal statement of admission and contrition, Virginia Gov. Ralph Northam (D) has strained credulity with his subsequent, turn-on-a-dime insistence that he was neither of two figures depicted in the racist photograph that appeared on his medical-school yearbook page in 1984. Since that head-spinning reversal over the course of less than 24 hours at the beginning of February, very little has emerged to shed light on that photograph, of one person in blackface and another in a Ku Klux Klan hood and robe, or on the mystery of its genesis and how it landed on Mr. Northam’s page if he did not put it there.

Now, with the publication of what was meant to be the definitive report on the incident, the conclusion, or rather non-conclusion, is a big fat shrug. After four months of investigations by a prominent lawyer at Richmond’s most notable law firm, the verdict in the matter of Mr. Northam’s youthful yearbook is in. It is no verdict at all.

The 55-page report, conducted by the firm McGuireWoods and overseen by former U.S. attorney and Virginia attorney general Richard Cullen, a partner at the firm, at the request of Mr. Northam’s alma mater, Eastern Virginia Medical School, is the product of dozens of interviews (and many spotty memories). In the end, the investigators were unable to determine the genesis of the photo or identify its subjects. And the report takes at face value Mr. Northam’s own, contradictory statements, amplified by two interviews the governor granted the report’s authors. (The initial statement, the governor and his aides insist, was a colossal misjudgment made in haste amid crisis, chaos and pressure.)

Attorneys are often called counsels, and this one is "special" hence, "Special Counsel"


That’s the hard part. For even as he was denying (after admitting) being in the photograph or placing it in his yearbook, Mr. Northam also acknowledged that he attended a dance competition around the same time, in Texas, wearing blackface while dressed as Michael Jackson. In his defense, the governor now says that was an act of racial and historical cluelessness. Okay, but if he was so clueless in Texas, then why credit his denials regarding an act of similar cluelessness (or worse) in Virginia?

The governor told the McGuireWoods team that he is “positive” he wasn’t in the notorious photo and has no idea how it ended up on his yearbook page. Yet the investigators could find no evidence that the photo appeared there in error, or as a prank, “or by any other means not at his direction.”