John Sexton at Hot Air, Will Trump’s Declassification Order Create A Chilling Effect On The Intelligence Community? What’s The Alternative?

That’s the question raised by a piece published Friday by Politico. I think the piece raises other questions which we’ll get to in a few moments. But first, the issue here is President Trump’s declaration Thursday that the intelligence community must “quickly and fully cooperate” with AG Barr’s investigation into the launch of the Russian collusion probe. Politico’s Natasha Bertrand suggests people within the Intelligence Community are worried about handing information to Barr which could potentially be declassified against their wishes:
. . .
The story frames the debate over what’s going on here in familiar media terms. You either believe there is something fishy about how this investigation (which resulted in no evidence of conspiracy) was conducted, or you believe this is an attempt to distract from other issues. As the author puts it, this is “a probe that Trump’s allies see as a necessary check on government overreach but that critics lambaste as an attempt to create the impression of scandal.”

This has been the dynamic since the first discussion of the FISA warrant and the dueling memos issued by Rep. Nunes and Rep. Schiff. The left has consistently been of the opinion that this is a side story and distraction from the real story, i.e. collusion.

That worked pretty well when a) we didn’t know much about the side story and b) no one was sure what Mueller would find about the collusion story. But things are different now. Now we know there was no collusion so this isn’t a distraction anymore because the collusion story is over. Second, we’ve also heard a lot of curious things about how the FBI investigated this case, not to mention a reference to it as an “insurance policy” in case Trump won the election. Maybe it’s all smoke and no fire. That’s still possible I guess, but enough questions have been raised that the American people deserve to know what actually happened here, not just what the IC feels like telling us.

The legal risk for participants in ‘Russia-Gate’/’Spy-Gate’ seems very real. The best defense against that risk is political. Speaker Pelosi and Senator Schumer know how to lead the defense by saying any evidence discovered by AG Barr is merely weaponized retaliation from the Trump DOJ. The media are already supporting that cause.


According to investigative journalist Sara Carter on Fox News' Hannity, last night, some of the documents will reveal that FBI "informant" (spy) Stefan Halper recorded both George Papadopoulos and Carter Page, and there is exculpatory evidence on those tapes. In addition to that, according to Carter, one of the biggest revelations will pertain to Power's unmasking efforts. As PJ Media reported in September of 2017, Power was unmasking people at a "freakishly rapid rate."

The former U.S. ambassador moved at such a rapid pace that she ended up "averaging more than one request for every working day in 2016," multiple sources told Fox News at the time. And she continued to seek identifying information about Americans caught up in incidental surveillance right up to President Trump’s inauguration. "That's unheard of," Carter said. "Put it this way -- when John Bolton was the at the U.N., he unmasked three people. Three people. She unmasked close to 300. And I'm going to tell you some of those names are going to be very important when they come out," she added.

According to OANN's Jack Posobiec, Power was targeting calls made about Israeli settlements. "When she found Gen Flynn making calls she opposed, she passed information to Sally Yates who opened Logan Act investigation," Posobiec reported on Twitter: . .

I believe she told Congress that someone else was asking for the unmaskings in her name. Can we put her in jail with Michael Cohen yet? James Joyner whines about how Trump is Politicizing Intelligence.  Meanwhile, from Streif at Red State, The Intelligence Community Slings Cow Manure To Try To Cover Its Misdeeds In The Russia Hoax "Let’s not fool ourselves here. The intelligence agencies are just as concerned about protecting their turf…and covering their asses in the wake of a failed coup d’etat…as they are about keeping the nation safe. " More concerned. From Twitchy, Shot/chaser GOLD: Turns out Adam Schiff was for declassifying Russia investigation info before he was against it, causing Ace to ask, The Leftist Chattering Class: Are They Dumb, Evil, Or Both? To be fair, catching any politician in hypocrisy isn't that much of a feat. David Catron at AmSpec, Declassification and Cognitive Dissonance in the Media, "How the media stopped worrying and learned to love the CIA."


At the Washington Post, meanwhile, Jeff Bezos’ team of seasoned editors and crack reporters has apparently concluded that democracy thrives in darkness. The Post suggests that the President should not have given Attorney General William Barr such broad authority to declassify information relating to the origin of the Russia investigation because it is “unprecedented” and “extraordinary” and causes concern among various and sundry “current and former intelligence officials.” It doesn’t seem to have occurred to anyone at that storied publication that these are almost certainly the very reasons that President Trump entrusted Barr with this responsibility . . . 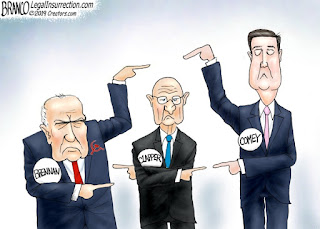 But, alas, according to Daniel Chaitin, WaEx, Trump never revoked John Brennan's security clearance. Too much resistance from the "deep state."

“Most terrorists are false flag terrorists, or are created by our own security services. In the United States, every single terrorist incident we have had has been a false flag, or has been an informant pushed on by the FBI. In fact, we now have citizens taking out restraining orders against FBI informants that are trying to incite terrorism. We’ve become a lunatic asylum.”

Liz Chaney, at Fox News says Strzok-Page texts sound ‘like a coup,’ could be ‘treason’


"In my view when you have people that are in the highest echelons of the law enforcement of this nation saying things like that, that sounds an awful lot like a coup -- and it could well be treason and I think we need to know more,” she said.

Roger Kimball at AmGreat explains, Let’s Call the Russian Collusion ‘Hoax’ What it Really Is, a coup attempt. At Red State, FBI Lawyer Says Page FISA Was Handled In An “Unusual Way,” Implicates Comey, McCabe, And Yates. There was nothing "normal" about any of it.

No friends of Trump, but Robert S. Litt and  Benjamin Wittes at WaPoo  (30 day pass) have 20 questions Mueller will actually be able to answer, and some of them are pretty good.

13. What role did the so-called Steele dossier play in your investigation? Under what circumstances, if any, do you think that politically motivated research should play a role in counterintelligence investigations?

14. In your investigation, did you find any evidence to suggest the existence of a campaign by Russia or any other foreign entity to feed disinformation to either you or to the FBI investigation that you took over?

15. In your investigation, did you become aware of any investigative step taken previously by the investigation you inherited that you did not believe was substantially merited or justified by the evidence?

16. To your knowledge, were any of the FBI’s investigative efforts directed in any way by the White House, in the Obama or Trump administrations?

18. The president has criticized your team for being a group of “angry Democrats.” Did you select members of your investigative team based on their political views? Do you think it is appropriate to inquire into the political views of career civil servants in such a matter?

19. How grave a threat to our nation does the Russian interference you uncovered represent?

20. What steps should the nation be taking to counter such interference in the future? Are you satisfied that the FBI and other government agencies are taking appropriate steps to thwart ongoing interference activities?

James Joyner again, Trump So Calm. Hasn’t Lost It. "It's time to invoke the 25th amendment, folks." George Bardmesser at Da Federalist, Impeachment Is For Democrats What Heroin Is For Addicts.


Serious talk of impeaching Trump began seven months before his election—no, that’s not a typo. According to a Politico about Trump in April 2016: “‘Impeachment’ is already on the lips of pundits, newspaper editorials, constitutional scholars, and even a few members of Congress. From the right, Washington attorney Bruce Fein puts the odds at 50/50 that a President Trump commits impeachable offenses as president.”

From Eugene Volokh, a respected legal scholar, Theory of Revised Julian Assange Indictment Could Apply to Ordinary Reporters. Let me think about that . . . OK, it's a bad idea, but just barely. WaPoo, Some federal prosecutors disagreed with decision to charge Assange under Espionage Act
Add to list, so it seems like the proposition is at least debatable.
Posted by Fritz at 10:31 AM