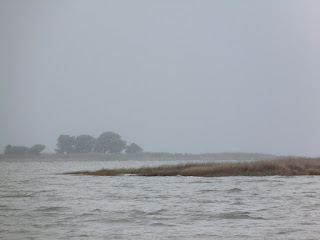 As I warned yesterday morning, I was off on a "walk-on" fishing trip with Walleye Pete most of the day, doing a fairly typical "island hopping trip, down the Eastern shore. It started cold (51 F) and rainy, and stayed cloudy, with occasional showers most of the day. 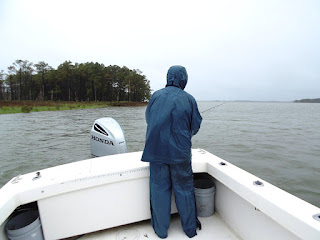 On of the intrepid band of fishermen, Craig, who I've fished with several times before. There were three others in addition to myself, Don and Sam, friends from Virginia, and Jamie, from South River "where the fish aren't." 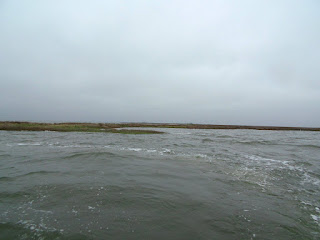 A typical island hopping day, we hit many points and small structures going down south as Holland, Spring and Adams Island, looking for the kind of current that would lead to good fishing. Fishing was a little slow early on, but once the outgoing tide started running good, most of the spots Pete checked we caught at least a few fish, some running into the mid 20 inches (until Thursday they have to be 35 inches to keep). At this spot, the best fishing was within inches of the bank; if you landed a jig on the edge of the grass, and pulled it back into the water, it was likely to be bitten. 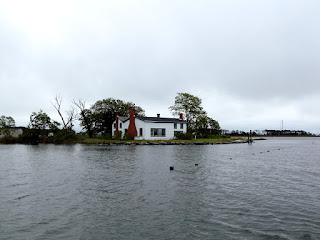 The morning high tide was extremely high, thanks to a bit of storm surge. The houses on Hoopers Island are barely clear of it. 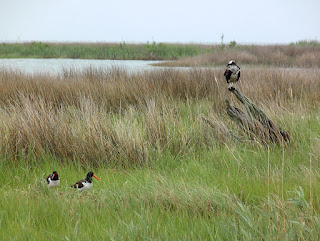 I forget which island I saw these American Oystercatchers and the Osprey on, Adam's perhaps. You don't often see Ospreys perched this low, but there wasn't much higher available nearby.

I finished the day with an big fish on top water off a rockpile on Hoopers Island, which made hit with an explosive lunge. After that, we had a lumpy ride back to Solomons against a stiff NE wind.
Posted by Fritz at 10:42 AM