I got dragged off to the beach in the middle of this one, which is why it's so late.

AG Barr is at it again, Hot Air, Barr: “Government Power Was Used To Spy On American Citizens”


Looks like William Barr still has no issues using the s-word to describe Operation Crossfire Hurricane. Despite criticism over calling the FISA-warrant surveillance on Trump campaign adviser Carter Page “spying,” Barr insists that’s exactly what it was in an interview with the Wall Street Journal. Barr wants to develop more specific rules for the circumstances which gave rise to it in order to ensure any future probes are properly predicated 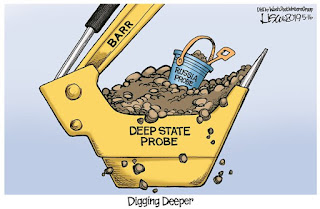 Ace, AG Barr: "If we're worried about foreign influence, for the very same reason shouldn't we be worried about whether government officials abused their power and put their thumb on the scale?"


The Attorney general gave an interview, which is slowly being trickled out, talking about his investigation into Spygate.


Attorney General William Barr said in an interview that aired Friday that he is investigating what role the Steele dossier played in the Russia probe, and that the salacious document had "a number of clear mistakes."
"It's a very unusual situation to have opposition research like that, especially one that on its face had a number of clear mistakes and a somewhat jejune analysis," Barr told Fox News' Bill Hemmer.
"And to use that to conduct counterintelligence against an American political campaign is a strange -- would be strange development."

Liz Shield, PJ Media in The Morning Briefing: A.G. Barr is Getting 'Inadequate' Answers. John Sexton at Hot Air, Barr: Congressional Democrats Are ‘Trying To Undermine My Credibility’, as is ex-FBI director Comey: ‘This shouldn’t happen in America’: Could someone please remind James Comey that he was DIRECTOR OF THE FBI?

Jimmy, quote what Barr has said that crosses the line you think he's crossed. Can you? Or are you just regurgitating talking points? You're acting like a man afraid of something... https://t.co/zSCE23BxxZ
— Derek Hunter (@derekahunter) May 18, 2019


John Nolte at Breitbart, 9 Reasons James Comey Might Be in Real Legal Jeopardy "1. Comey Conducted High-Level Investigations out of FBI Headquarters" . . .  Ace, Senior FBI Officials Worried That Comey's "Briefing" About Blackmail Material Just Might Seem Like Comey Was Himself Blackmailing Trump, Just as Former FBI Capo J. Edgar Hoover Did to Presidents. James Comey, onetime communist, knows how to use kompromat. Hoover got the building named for him, though. I don't think Comey will.  Hannity- Deep State is Crumbling Investigation of investigators causing FBI-CIA rats to leave sinking ship, The Last Tradition has the video.

Both stories can’t be true!@Comey told FBI in late 2016 that BRENNAN insisted on including the Dossier in the intelligence community assessment.

But CIA claims COMEY made the recommendation, and Brennan and Clapper objected.https://t.co/dzhy5fjG9V
— Rep. Jim Jordan (@Jim_Jordan) May 15, 2019


RCP, Gowdy: It's Been Two Years And The Country Wants To Know What Set Off Trump-Russia Probe

At AmThink, Thomas Lifson reports Joe DiGenova and Victoria Toensing reveal Brennan was the mastermind of the Russia hoax


The most important bombshell they released is that they believe that John Brennan, then head of the CIA, was the core of the conspiracy.  Victoria Toensing added that this is because Clapper is too dumb to pull off such an operation.  They also revealed that Admiral Mike Rogers is happily willing to testify about the abuses he uncovered, which actually triggered the initiation of the Russiagate plot.  Recall that when he was head of the National Security Agency (NSA), which comprehensively monitors telecommunications, he discovered that political appointees in the White House were using its database on a huge scale to monitor political opponents and acted to cut off that access.  Suddenly cut off from their ability to spy on political opponents, and almost certainly fearful of public exposure should Hillary Clinton be defeated, the wheels were put in motion (with Brennan in the lead) to generate the Steele dossier and the FISA warrants to both spy on and tar the threat of a Trump presidency.

Ed at Hot Air asks New Mueller Mystery: Why Was No One Charged For Tampering With Flynn?


Is a communication between attorneys over a withdrawal from a joint defense agreement witness tampering? If so, then a not-insignificant number of attorneys might be at risk of prosecution. Mueller wasn’t making that argument anyway; it was part of his argument on obstructive behavior by Trump, and it wasn’t one of his strongest arguments either. The theory was that Trump ordered his attorneys to deliver a wink-wink, nudge-nudge reminder of the value of his “warm feelings,” but Mueller never makes a case that this was anything other than a negotiation between attorneys who had worked together previously on a joint defense.
. . .
The likeliest explanation is that none of these alleged attempts at tampering reached a level that could be charged, let alone prosecuted. Mueller, whose institutional roots at the DoJ run deep, would not have included derogatory information on others absent an indictment.

LMT online, Judge orders public release of what Michael Flynn said in call to Russian ambassador. Good, more information, not less. Althouse quotes Trump "It now seems the General Flynn was under investigation long before was common knowledge. It would have been impossible for me to know this but..."


"... if that was the case, and with me being one of two people who would become president, why was I not told so that I could make a change?"

Because that was never the point. The point was to entrap Flynn and then Trump. Sundance at CTH has a long diatribe on Sally Yates -vs- Michael Flynn… It's clear the Obama team had a major bone to pick with Flynn.


Judicial Watch president Tom Fitton said that Nellie Ohr informing her husband about deleting the emails indicates a pattern of covering up a plot against Trump. “This email is disturbing and suggests documents relevant to the improper targeting of President Trump were destroyed,” Fitton said in a statement.

Hot Air, citing the NYT, finds Frustrated House Dems Pin Their Hopes On Mueller, while at Politico, Mueller’s House testimony likely off until at least June and No Mueller, no McGahn and stalled investigations leave House Democrats frustrated (LMT). So sad!

AP reports Step by step: Democrats play the long game against Trump and since their attention span is about 1 hr, he's probably golden. At Hot Air (again citing NYT) Pelosi Raises Impeachment As A Way To Break Trump’s Information Stonewall


“The courts would respect it if you said we need this information to carry out our oversight responsibilities — and among them is impeachment,” Ms. Pelosi said during her weekly news conference at the Capitol.

Here's What Jerry Nadler and the Dems Were Doing During Trump's Immigration Speech "House Judiciary Committee Chairman Jerry Nadler led colleagues in reciting the 400-page Robert Mueller report out loud - in its entirety." What they needed was an utterly useless gesture, and they're just the people to do it.


Mrs. Susan Thornton, the former acting assistant secretary of state in the Trump administration, tells her Beijing audience to stop negotiating until President Trump is removed from office in 2020.

And from John Solomon at Da Hill, Ukrainian who meddled against Trump in 2016 is now under Russia-corruption cloud. Will he turn on Biden?
Posted by Fritz at 12:44 PM