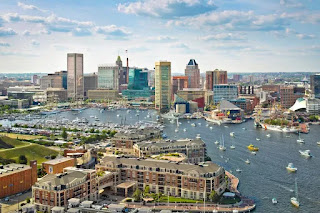 
Despite heavy rainfalls last year that sent millions of gallons of sewage into the harbor, a new report card published today by the Waterfront Partnership found that the level of fecal bacteria in Baltimore’s harbor actually declined from 2017 to 2018.

In the Baltimore region’s portion of the Patapsco River basin, which covers the Inner Harbor downtown to the western shores of the Chesapeake Bay, samples taken by Blue Water Baltimore showed the level of fecal bacteria was acceptable for swimming 100 percent of the time in most areas.

Of the 22 testing sites, 16 met the acceptable level in every sample, with the remaining six hitting the 80 percent threshold.


In the Jones Falls Watershed, which has several branches in Baltimore County and runs all the way to the Inner Harbor, scores declined in several places, but inside the city line, four sites were found to be acceptable for swimming 80 percent of the time–and Stony Run, which connects with the Jones Falls, had perfect scores.

Two sites in Baltimore County portion of the watershed–the North Branch of the Jones Falls and a portion of Roland Run–had samples that passed only 60 percent of the time. The other five had positive tests in 80 percent of cases or higher.


The news was not as good in the Gwynns Falls Watershed in the western portion of the city and county, where three sites had passing rates less than half the time. In one site, Powder Mill Run, no tests showed the water was fit for human recreation.
Overall, the report paints a positive outlook for the harbor.

“In 2017 fecal bacteria scores had improved dramatically across the Harbor and streams in the Jones Falls and Gwynns Falls watersheds,” the report says. “Despite the high volume of sewer overflows in 2018, bacteria scores for the streams have remained relatively high for the second year in a row.”

The solution to fecal pollution is dilution?
Posted by Fritz at 5:06 PM